As you may recall (depending on your modem speed) yours truly had just deser...um, ridden ahead of our partners in an effort to get to the van and return to them before the onset of (1) dark, or (2) rigor mortis.

Despite our weariness, we had renewed energy, brought on by the realization that people were depending on us. This would have been hysterically funny were it not so true. We had three months of riding experience, we had never ridden more than twenty miles at one time, and we were about to enter the toughest stretch of one of the most challenging routes in the state. How did we ever let ourselves get talked into this? Boy, we couldn't wait to rescue our friends...so we could kill 'em!

That emotion passed quickly, replaced by a more appropriate sense of foreboding as the mountains loomed directly ahead. At least the wind had quietened, and was now at our backs, as we began to complete the circuit.

The Davis Mountains might be classified as the Rockies' poor southern cousins. They are a geologic afterthought, rising from the plains of the Edwards Plateau, providing a preview of what lies even further south, at the Mexican border, where the Rio Grande winds through some of the most desolately spectacular scenery in North America. Some folks might deride the Davis Mountains as mere wannabe's, and scoff at the fact that the road we were on is the highest in the state. But from our perspective, we may as well have been cycling through the Alps.

For twenty miles, we struggled up the slopes, oblivious to the thick vegetation and active animal life around us. Sometimes we were able to make the crest under pedal power, thanks to 19" low gears; just as often, though, we found we could walk faster than we could ride. The swooping descents would have been exhilirating in another lifetime; most seemed to have hairpin curves at the bottom that put a damper on the idea of keeping momentum into the next climb.

At some point, we began to fantasize about quick endings to this ordeal. Perhaps a car...no, a pickup!...would come by and, well, pick us up. Or, better yet, run us down. You can never find a rednek when you need one. There was about as much traffic on this road as there were Burger Kings: none.

Somehow, miraculously, we topped a hill and gained full view of McDonald's Observatory atop Mount Locke, glowing in the late afternoon light like some sort of metal-clad mushroom. Although we didn't know it at the time, it was downhill, literally and figuratively, from here. 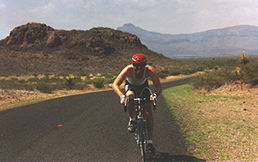 Me, after a couple of years of recovery (note the
stylish Kiwi helmet - about 4 pounds, as I recall!)

However, we were now piteous examples of cyclists, fighting leg cramps, gnawing hunger (mirages of chocolate malteds beckoned enticingly just out of reach) and all around bad attitudes. It was at this point that Debbie began to plead with me to leave her and (sob) save myself.

"I'll hide in a tree," she offered, "and just wait for you to come back." The thought of her trying to hide herself and her bike in one of the scruffy mountain cedars that dotted the side of the road might be the lasting mental image that epitomizes this endless day. Plus, I didn't really believe she had the energy to climb a tree, anyway. We returned to our original idea of getting run over in order to get a free ride in an EMS vehicle.

By the way, since we're in the neighborhood, you might as well know that the side road leading up to the observatory is an honest 17% grade. Several years later, we would return and conquer it, pedalling the entire ascent (which, thankfully, is only about two miles). Of course, if you had suggested to us at the time of our initial ordeal that we would ever voluntarily return to this area, for the sole purpose of engaging in activity of a bicycling nature, we would have had no choice but to smite you on the spot, as you would have obviously been deranged and a danger not only to yourself but society in general.

So...where were we? Yes, of course...we had quickly dismissed the idea of climbing trees like a pair of punch-drunk racoons, and it was becoming apparent that a merciful end via alien abduction was probably out of the question. We had no choice, it seemed, but to pedal onward. This was our destiny. We could see it clearly now. We had died, probably on the ascent out of Madera Canyon, and, like some perverted mutation springing from a union of that eternal rock 'n roller, Sisyphus, and a squirrel inside a little wheel, our judgment would be in the form of an everlasting ride through the Davis Mountains.

But wait! What's this? We round a curve and are suddenly confronted with a vista of sunlit green which has the primary and wonderful characteristic of being below us, as far as we can see. Even our fatigue-addled brains and lactic acid-saturated legs respond to the concept of "downhill." As in "looonnnggg downhill." As in "almost home downhill." We fly like the wind, rejuvenated, revived, and even the last climb, thrown in almost as a cruel joke, is quickly dispatched.

The last five miles is anticlimactic, and we cruise into metropolitan Fort Davis, marvelling that the entire town hasn't turned out to greet us. Don't they realize that a miracle has occurred? Apparently not, for the smirks on the faces of the few people that acknowledge our presence clearly reveals that the only miracle is that we haven't been detained by the local constabulary and charged with impersonating live people.

Nevertheless, we knew we were alive (and it wasn't just the pain that was reminding us). We were conquerors, however feeble, and nothing would be the same thereafter. We understood that no matter the challenges in the future, we could best them. We were--truly and forever--cyclists.

That is, at least until we confronted the Kerrville-Vanderpool century the following year, and then we found out what a real ride was all about!

"But," you ask, "what about Chet and Nat, still out there somewhere in the hills...what happened to them?" I'm glad you asked, as it shows that you were not only paying attention, but you are a kind and gentle person. I left Debbie at our car to watch the bikes and I hauled the van down the road we'd just ridden, driving as fast as I dared, what with my twitching legs, bloodshot eyes and overwhelming feeling of lassitude. I had no idea how far I'd have to drive to find the intrepid duo. Flashing back to our brief period of hysteria, I was also careful to scan the trees along the road, just in case they had decided to perch therein. I also had a slight fear of running them over, which would have been the perfect ending to this day, I suppose.

I came upon them about twenty miles from town. Nat was walking her bike up a hill and Chet was pedalling the 'bent at about three mph or so, weaving across the roadway in an effort to stay upright at that speed. All in all, they were in pretty good shape, but obviously relieved to see me. We packed 'em up, headed back to town, and prepared to go our separate ways back to Midland, a not-so-inconsequential 150 mile drive ahead of us.

And thus it ended. Looking back, it wasn't so bad. But, I've had kidney stones since then, and it's all relative.

As far as Chet and Nat...well, we stay in touch, infrequently...but, you know, we never rode together again. Go figure.

Return to the Enervating Beginning