As promised, I’ve completed the time lapse movie showing scenes from our back yard in the days following the massive (for us) post-Christmas snowfall, aka Winter Storm Goliath.

It took me a lot longer than I expected, not because of any special technical complexity, but mainly due to my use of Apple’s iMovie, a consumer-grade video processing software ill-designed to handle more than 4,000 photos (or 18.3 gigabytes). In fact, the process was excruciatingly frustrating; I won’t bore you with the details, but the footnote to this post explains the issues in case anyone else has problems with still photos in iMovie.

The final product consists of the daytime photos, taken at a rate of one every minute, for almost five days. If you’re doing the math in your head, you’ve correctly figured out that is more than 4,000 photos; I deleted the nighttime pictures because…dark. If you look carefully you will see a couple of moonrises (with a chasing Venus). The photos were imported into iPhoto and the duration was set to .1 second per photo, the smallest duration the program supports. That made the video too long at more than nine minutes, so I exported it as a movie, then reimported it, speeded it up by 300%, and re-exported the resulting video at about three minutes in length. So, even if you have a very short attention span, perhaps it won’t be too boring.

And speaking of boring, you’re probably wondering why I would photograph snow for five days. That’s a fair question and the short answer is that I didn’t anticipate that this snow would last longer than any in memory. I really thought the snow would be gone in a day, or two at most, because that’s what always happens in West Texas. But we had uncharacteristically cold weather (plus a light additional snowfall a day or two later) that preserved the snow. In fact, seven days later we still had vestiges of the snow on the ground.

The music is Franz Schubert’s Symphony No. 8 “Unfinished” by the Budapest Philharmonic. I ripped it from vinyl, which may explain why it escaped Vimeo’s copyright police. Don’t tell anyone.

Viewing tip: You can watch the video by clicking below, but if you can spare the bandwidth, click the word “vimeo” to jump to the Vimeo website, and then watch it in full-screen mode. The GoPro’s HD video capability really is impressive for such a small camera.

By the way, even though I cut out most of the nighttime photos, I did scroll through them in case there was anything out of the ordinary. Sure enough, I did find one puzzling photo…I’d love to hear an explanation of what made the lights in the sky that showed up for one frame at 8:06 p.m. on January 2nd. I can’t identify it…it’s in the sky…that makes it an…well…you know. 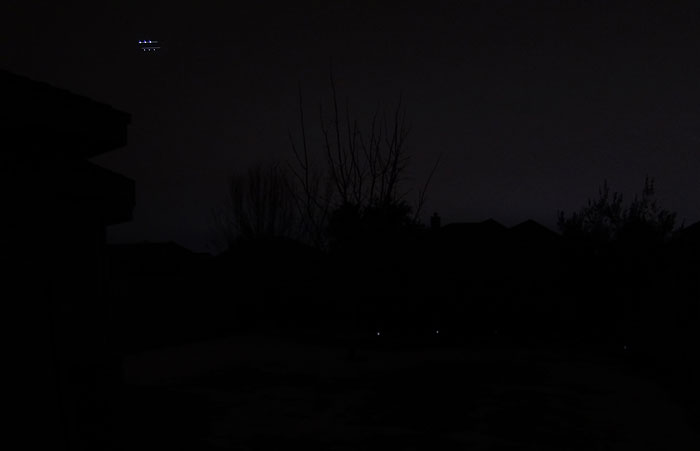