Our road trip began in Midland, Texas, after lunch last Thursday and ended 950 miles later, on the following Saturday morning. During that time, we–MLB, my mother, and I–traveled through some of the best and worst parts of Texas.

The purpose of the trip was twofold, with one being significantly more enjoyable than the other. Our immediate destination was the city cemetery at Nocona, where we would attend the graveside service of my mother’s sister who passed away about a week earlier.

Our second stop would be in Fort Worth, where my mother would visit with her remaining sibling (out of the original eleven twelve*), an older sister who was unable to travel to attend the service.

The round trip from Midland to Nocona, then to Fort Worth and back to Midland was about 720 miles. The remainder of the mileage came on Saturday morning when we drove Mother home to Fort Stockton and then returned to Midland.

Below is a map showing the route we took, in case you want to retrace our tire tracks. The annotations didn’t appear on the original Google Map, but they should have. 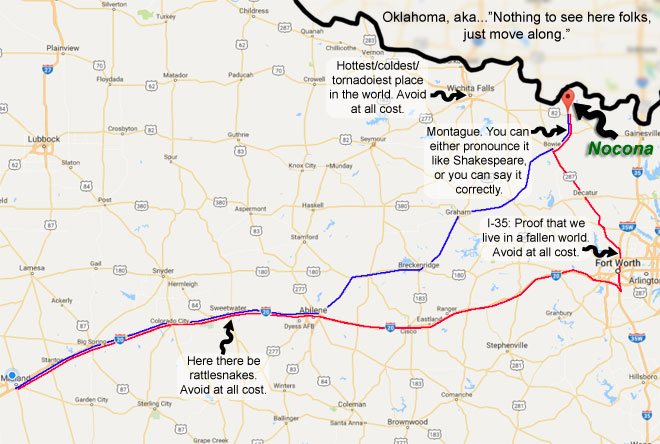 The drive from Midland to Abilene is rarely a treat for the eyes, and this trip was no exception, although the appearance of thick patches of bluebonnets around Sweetwater, thanks to the mild winter and timely rainfall, was a pleasant surprise. But the real surprise came as we turned northward from Abilene and entered the hilly plateau country of north central Texas (it probably has a specific regional name, but darned if I could find it). I’ve only been that way a few times, but I had never seen the foliage so green and thick nor the ponds, creeks, and lakes so full. An added pleasure was the absence of oilfield service trucks and oil tankers, an increasingly rare phenomenon in the Permian Basin.

While the second half of the drive to Nocona was a pleasant surprise, the actual town of Nocona was doubly so. We had reservations at the Red River Station Inn, located in the heart of downtown (if you can apply such anatomical references to an area of two blocks), and it turned out to be a delightful place to stay. The RRSI is a B&B-style inn consisting of ten rooms, each with a theme based on regional historical characters (we stayed in the Quanah Parker and Joe Hancock rooms. I knew about Quanah Parker, but I was unfamiliar with Joe Hancock, which turns out to be the name of both a famous Texas quarter horse and the man who owned him). 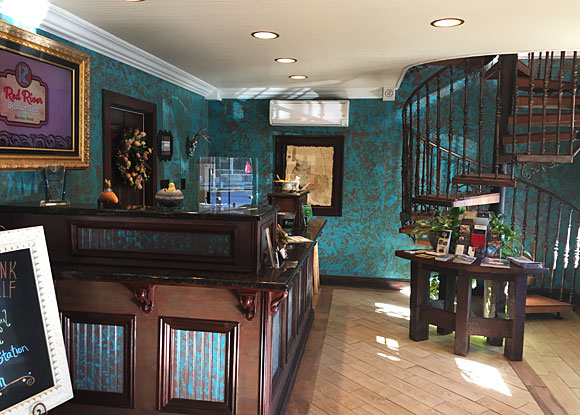 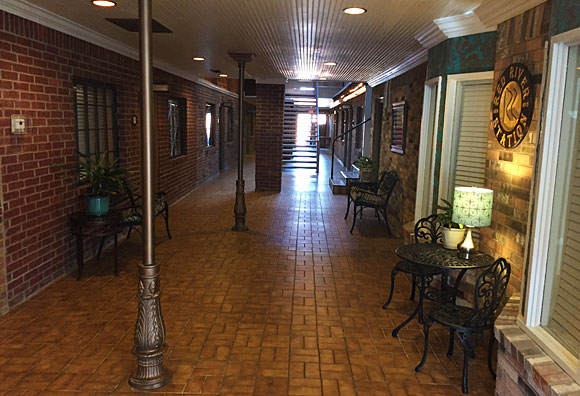 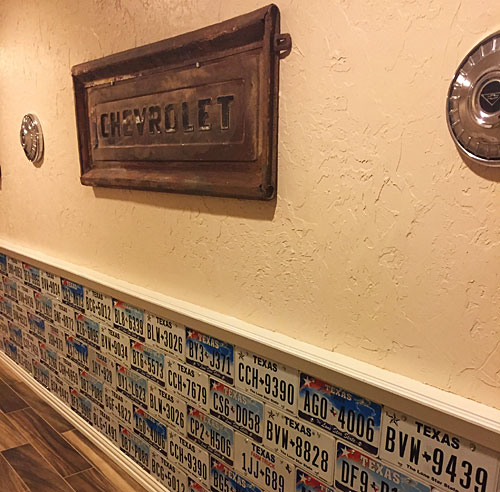 The decor in the 2nd floor hallway leading to the veranda is indisputably Texan.

The innkeeper and owner, Bob Ferguson, helped design and remodel the existing building to create the hotel, and the before-and-after photos on the website give some idea of the work that went into that project. It would be a great weekend getaway for anyone within a hundred miles of Nocona, and I’m not the only one to think that…reservations are hard to come by this time of year.

The inn offers free beer and wine in the evenings in the upstairs dining room and veranda, and DIY breakfasts each morning. An additional dining option is next door at the newly-constructed Red River Pizzeria, another pleasant surprise, featuring a variety of pasta dishes as well as hand-tossed pizzas.

Nocona and the surrounding area apparently has a lot going on. The town has a museum showcasing 120 classic cars (located downtown), and the annual classic car show and auction in May attracts people from all over the country. We also met the co-owners of the 4R Ranch Winery who described an apparently never-ending series of events, both public and private, going on at their location near Muenster, a short drive from Nocona. Several new businesses have opened or will soon open in downtown Nocona. 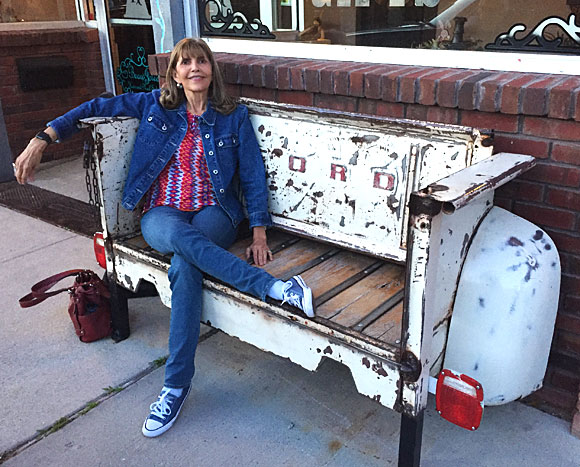 You can’t park your truck on the sidewalk, but you can still sit on the pickup bed.

And if all that’s not enough to attract you, the town has what I believe are the widest downtown parking spaces in the world. Seriously, I could have parked my truck sideways in the angled space. If the town achieves its apparent goal of becoming the next Fredericksburg, it will have to narrow those spaces to provide more parking. 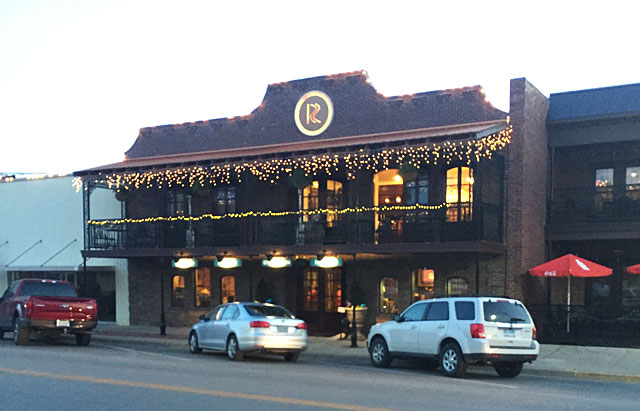 Those cars in front of the Inn are NOT parallel-parked.

Following a short but sweet and moving graveside service for my aunt, we headed for Fort Worth for another short and sweet visit with another aunt. This drive wasn’t as pleasant as the previous day’s, however, as we spent more time than desired on that special piece of Hell on Earth known at Interstate 35. Crews have been working on I-35 since the Ice Age, and will undoubtably be working on it when Jesus returns (much to the relief of those who will be raptured from the non-moving traffic in which they’ve been trapped since childhood). I told my mother that I’m now officially too old to ever do that again, and she agreed.

As an aside, I mentioned above that my aunt and my mother are the two remaining children from a brood of eleven twelve*. I find it interesting to reflect on the naming conventions their parents employed for the kiddos. I’m going to try to list the siblings, from oldest to youngest (more or less; some of the older details are fuzzy), to give you a taste of how children’s names have changed over the past century. There was Seiver, Tressie, Ora, Odell, Richard (they obviously slipped up there and succumbed to conventionality), Rease, Curtis*, Burtis, Helen (another middle-of-the-road name), Euvela, Melba, and Jasper.

Now, contrast that with the siblings on my dad’s side: Ray, Robert, John, Joe, Martin, Sally, Alice, David, Margaret. My dad’s parents apparently drew on the Hardy Boys collection for naming inspiration.

We spent a little more than an hour visiting in Fort Worth, and besides the nice time with my aunt and her son and his wife, I also scored a few packages of waffle mix from my cousin Jerry, aka The Wafflemeister. (His secret: mix buttermilk and sweet milk in equal portions. But you didn’t hear it from me.) We then hit the road for the return trip at about 5:00 p.m. and you know what that means. Fortunately, we made pretty good time getting away from Fort Worth and the further west we went, the lighter the traffic.

We did see the aftermath of three accidents, one of which was a horrific multi-vehicle affair that necessitated the landing of a life-flight helicopter on the interstate and backed up traffic for about five miles. Fortunately for us, all of those wrecks were on the eastbound side of the interstate, and our only delays were from the rubberneckers on our side.

This was not a trip I’d care to repeat on a regular basis, but all things considered, it was a good time and accomplished a couple of worthy goals.

*Update: Thanks to cousin Marshall for reminding me that I forgot my Uncle Curtis (which made for twelve sibs, not eleven. In my [weak] defense, I’m not sure that I ever met Curtis. But he shouldn’t be forgotten.