The pair of red-shouldered hawks in our neighborhood have built a nest in a huge oak tree in the lot just to the west of our house. I wasn’t completely confident of this fact until yesterday, but the circumstantial evidence was pretty strong.

We could see a mass of twigs and small limbs waaaay up in the tree, and we guessed that it was a nest, but because of its placement and the other foliage, there’s no clear line of sight to it. However, we often saw one or two hawks fly to and from the tree…but, again, no line of sight to confirm they were visiting the nest-like mass.

So, yesterday morning I charged up a couple of batteries for my drone and launched it from our driveway, thinking that perhaps I’d have better luck spying on the nest from above. It was rather breezy and I had some trouble maneuvering the drone, but I soon discovered that there was no clear path to the nest from that side of the tree, so I landed the drone, intending to try again today when it might be more calm.

Even though I had no luck spotting the nest, both hawks flew out of the tree and around the drone a couple of times. I was curious to see if one of them might attack the little aircraft, but they didn’t seem overly aggressive. (I was to later discover that there was a greater threat than protective hawks.)

Fortunately, the wind died down later in the afternoon, so I again launched the drone and flew it to the other side of the tree, opposite from our house. From there, I took it up to an altitude of about 50-60′, pointed the camera downward and — voila! — an amazing scene appeared: 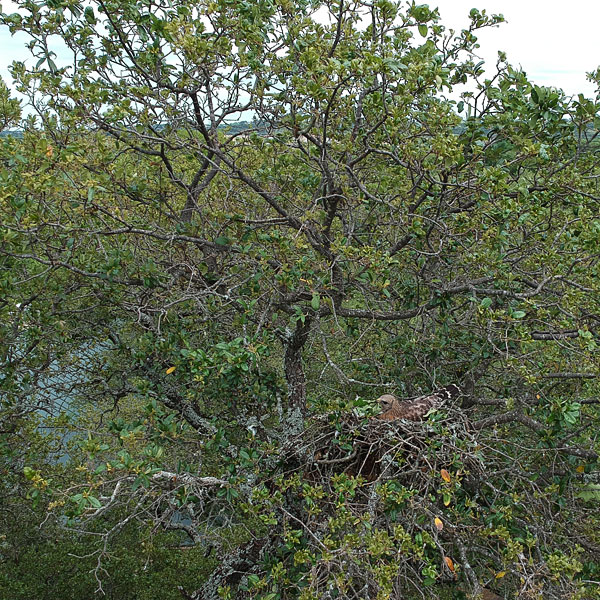 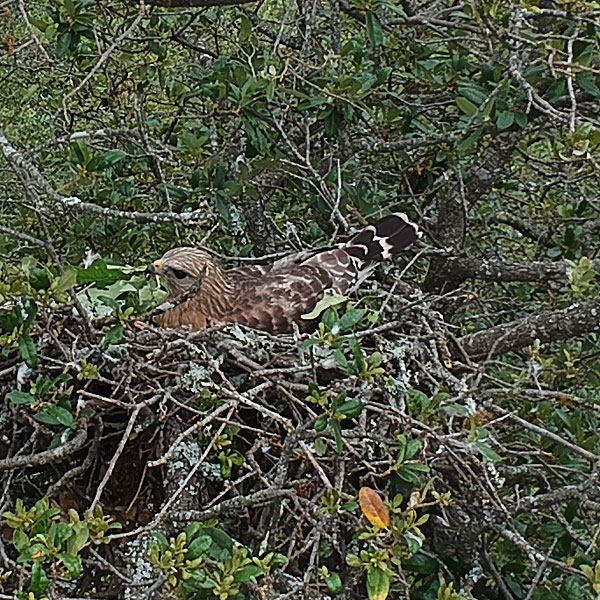 The drone hovered about 6-10′ above the nest and I recorded video for a couple of minutes. I was happy to see that the hawk never seemed to acknowledge its presence, much less appear agitated.

I mentioned above that some non-hawk-related drama occurred. I piloted the drone back to the driveway where I intended to land it. It was hovering calmly at about 6′ when I tried to activate the auto-land control on my phone, but instead of settling gently into my outstretched hand, it shot straight up into the branches of another oak tree shading the drive and became hopelessly entangled, twenty-five feet above my head. Well, great. I felt like Linus, staring mournfully at his mangled kite in the grip of that predatory tree.

The drone’s green and gray color scheme was a perfect camouflage, and it would have been difficult to even determine its location but for the glowing lights from the trapped-but-still-activated craft. 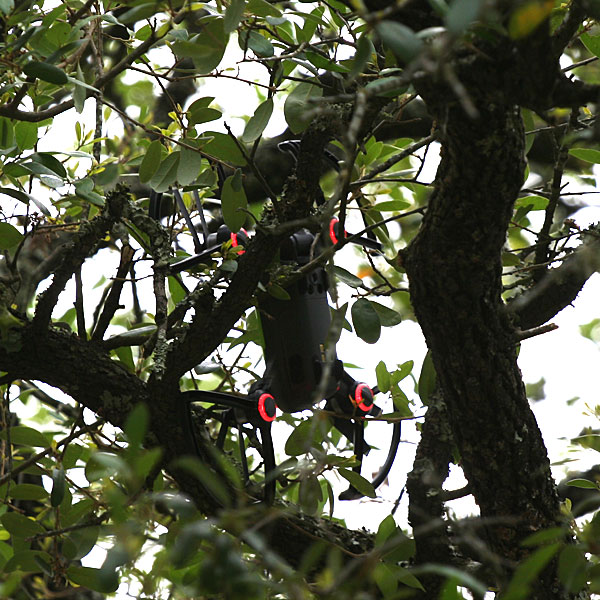 By the way, normally there are two green lights and two red ones. Four glowing crimson lights indicate a malfunction. Gee…ya think?

My MacGyver instincts kicked in. One approach would be to cut down the century oak, but that was possibly a bit extreme. I needed something with a thirty foot reach to dislodge the drone.

Fortunately, another dominant instinct is hoarding, and I still have a decades-old windsurfing mast which is fifteen feet in length. I had attached a small plastic rake on the end and I was using the contraption to clean leaves off the roof and gutters. That extended the length to seventeen feet.

I got a stepladder out of the garage and the second highest rung added five feet to the reach. If you’re doing the math, we’re now at 22 feet. I needed only eight more feet and I cleared that distance with my own wingspan, holding the mast+rake assembly at arm’s length.

With Debbie steadying the ladder, I was able to dislodge the drone, which came crashing down in a decidedly ungraceful fashion. It hit the pavers pretty hard, sending the battery flying in one direction while the drone bounced the other way. Not good. (In hindsight…how hard would it have been to spread a blanket or two under the tree to cushion the inevitable fall? I guess that’s [one reason] why I was never cast in the role of the actual MacGyver.)

Upon closer inspection, I was relieved to see that the damage was actually fairly minimal. One of the rotor assemblies was a bit cockeyed (see photo below), but when I popped a battery back in and tested the drone, it lifted off and hovered in place quite steadily. Apparently the operating system is sophisticated enough to allow for variation in the rotor’s position. 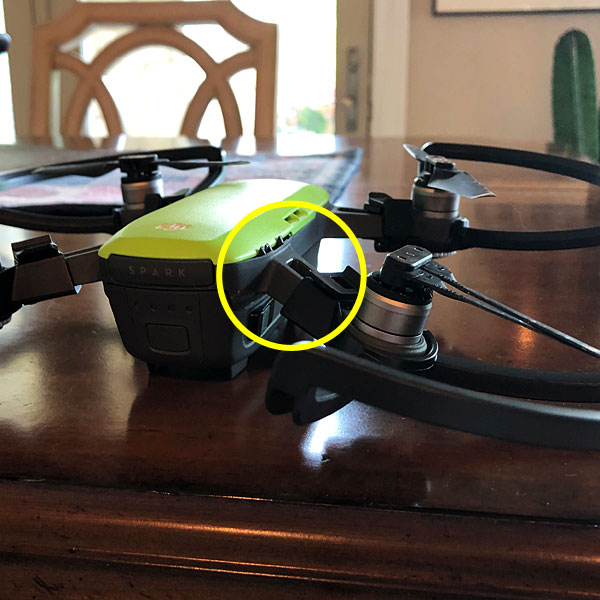 I was able to bend the rotor assembly back into place and I suspect there will be no issues with flight, although I won’t know for sure until I can put the drone through its paces in the great outdoors. (Update: I did just that a couple of hours ago, and while the drone still flies well, it doesn’t reliably respond to instructions. There’s either some circuitry damage, or it no longer trusts my piloting expertise.)

I have no idea what caused the mishap. After discussing it with my pal Tommy, another drone pilot, we theorize that the automatic Return To Home (RTH) feature kicked in just as I tried to initiate the landing. The RTH is designed to bring the drone back to safety when the battery reaches a critically low condition, ensuring that it doesn’t land abruptly (aka “crashing”) in an untenable position…like, say, in a tree. The situation oozes with irony.

Back to the birds. I don’t want to intrude on their personal space, but at the same time, I really want to monitor the nesting situation, especially if/when the eggs hatch. So, I plan to check on things every few days. If you’re interested in the progress, I’ll be posting updates on the Gazette as they occur. And I hope none of them involve any rescue or recovery attempts!