From Elvis In Nashville (hereafter referred to as FEIN to spare my typing fingers), a compilation of songs by you-know-who that became available last Friday, raises two questions. 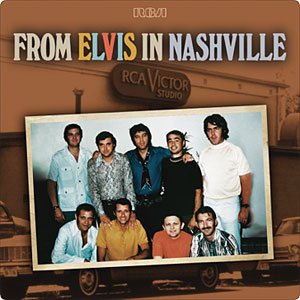 I’ve spent a considerable amount of time over the last two days listening to FEIN. I call it a compilation instead of an album or a record, because it’s a multi-volume collection of 74 items (the iTunes term for tracks is particularly useful in this case because we’re not necessarily speaking only of songs) totaling four hours, twenty-five minutes, and fifty-four seconds of listening time. In other words, it’s a beast and one could be forgiven for thinking it would be a slog to get through. Hence, my first question.

Some context is essential. In June of 1970, Elvis Presley traveled from his beloved Memphis to RCA’s Studio B on Music Row in Nashville, and spent a week with some of the world’s best studio musicians (a group you’ve no doubt heard referred to as the Nashville Cats). That week of work resulted in three albums. The first 40 or so songs on FEIN are the remastered studio recordings of those albums.

So, why not just buy those albums and save oneself a few hours of listening? Well, primarily because the albums in their final form did not do justice — in my opinion — to what took place in the studio. They were overproduced — again, my opinion — with the addition of horns and strings, background singers, and other effects that sometimes masked, or at least distorted, the brilliance of the original music. But don’t take my word for it; here’s what a writer at Rolling Stone Magazine has to say about it:

While those albums had their moments, they also suffered from being overly polished. … From Elvis in Nashville removes those distractions to focus on Elvis’s voice and the chemistry of the band. — Joseph Hudak

The operative word here is “chemistry,” and FEIN makes it crystal clear that Elvis and his studio teammates are absolutely comfortable with each other, and the resulting music is a revelation.

I was not a fan of Elvis’s music until later in life. I didn’t dislike it; it just wasn’t on my musical radar. But as I’ve aged, my musical horizons have expanded (forgive the tired cliché), and I’ve come to appreciate his unique talents. FEIN has taken my appreciation to another level.

So, you may ask, if the first forty tracks are basically the final studio recordings of songs that were released on albums, what about the remaining thirty-four? Excellent question, and easily answered. Those tracks are rehearsals and preliminary takes of the final recordings, along with a couple of brief jam sessions in which the Cats cut loose on their own.

For example, the final version of Twenty Days and Twenty Nights runs just over 3 1/2 minutes; the preliminary version is comprised of takes 5, 6, & 8 (7 must have been horrible) and runs almost six minutes. So, why would anybody want to listen to recordings of efforts that weren’t deemed good enough to land on an album? That’s slightly harder to explain.

For me, it comes down to being curious about how music is made…how songs are constructed or assembled. The additional tracks on FEIN give us a peek inside the sausage factory, so to speak, by capturing the dialog among Elvis, the musicians, and the producer, and when taken in total, reveal much of that chemistry mentioned in the quote above. Granted, this means that about half of FEIN is not something that you’d put on the stereo at a party or even for background music; it requires careful listening (I highly recommend doing that via a good pair of headphones) and a desire to hear more than just the musical notes.

So, let’s end by riffing on the first two questions I posed at the top of this post. If your tolerance for Elvis’s music is limited to the popular songs on which his fame rests — and this probably encompasses the majority of people — FEIN might be too much Elvis. On the plus side, there’s such a wide range of styles and genres represented on this compilation, ranging from overwrought ballads to down-the-line country to conventional covers to swinging rock and roll to songs bordering on novelty, that everyone is likely to find something that appeals to them. But if you’re in it solely for the music, you might find half of the compilation boring or unnecessary.

The second question — which Elvis do you prefer? — comes down to this: did you like the Las Vegas glitzy big-production Elvis-as-entertainer (try not to focus on body image issues), or did you appreciate more his talents as a pure musician? I’m firmly in the latter category, and for anyone else who falls alongside me, I highly recommend FEIN.

I haven’t touched on the technical aspects of this recording but the remastering supervised by sound engineer Matt Ross-Spang is an impressive bit of artistry on its own. I mentioned earlier that listening on headphones was a good way to catch the background dialog, but it will also underscore the absolute clarity of the music itself.

Don’t be misled by the description of the music as not being “overproduced.” These are not stripped down, simplistic arrangements. The Nashville Cats as a group produce a complex-yet-clean musical setting for Elvis’s vocals; it’s a thing of beauty when eight musicians at the top of their individual games come together in a flawless, tight production.

This collection has way too many tracks to review individually, but there are a handful worth spotlighting. Elvis’s covers of classic country songs like Bob Wills’s Faded Love, Make The World Go Away (popularized by Eddy Arnold), and Willie Nelson’s Funny How Time Slips Away are standouts.

Then there’s Whole Lot-ta Shakin’ Going On, a high-energy (an understatement) arrangement in which Elvis eventually succumbs to scatting that is almost indistinguishable from ecstatic glossolalia.

Finally, it’s worth pointing out that the recordings of the rehearsals and preliminary takes are uncensored, and in at least one case, neither is the final studio version. Got My Mojo Working / Keep Your Hands Off of It appeared on the 1970 album Love Letters from Elvis. That version has been carefully edited, and not just to add horns, strings, and background singers. If you listen closely, you might pick up on the briefest of skips in the lyrics. The version that emerged from the studio as heard on FEIN has those skips filled in, as well as keeps some editorial comment by Elvis after the song ends. Without going into detail, let me just say that the FEIN version was somehow overlooked by Apple’s iTunes Store censors, as it would normally earn the “E” flag (for “Explicit”).