I don’t know about where you are, but it’s pretty hot here at Casa Fire Ant. 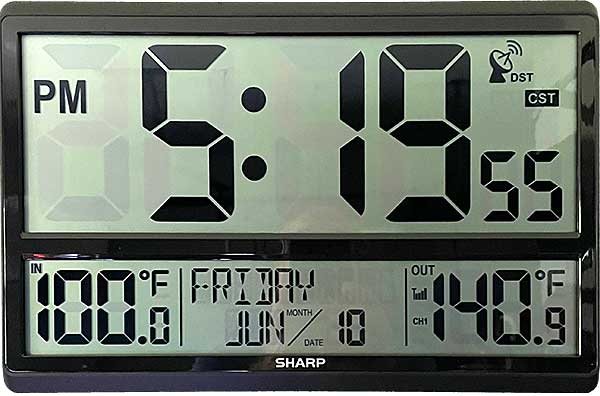 Temp on the left is inside the garage & on the right is outside next to a rock wall.

Fortunately, the heat is not harshing our mellow too much as far as being able to enjoy some cool close encounters of the natural kind.

And, yes, there are a couple snake photos herein, but they’re at the bottom of the post.

Alert Gazette readers will no doubt recall that last July we monitored the progress of several black swallowtail butterfly larvae (i.e. caterpillars) that were chowing down on parsley planted in a pot on our back porch.

A day or so ago, Debbie noticed that another crop of the little tykes has sprouted, and once again, they’re feasting on parsley to build up the stamina to eventually spread wings and fly. 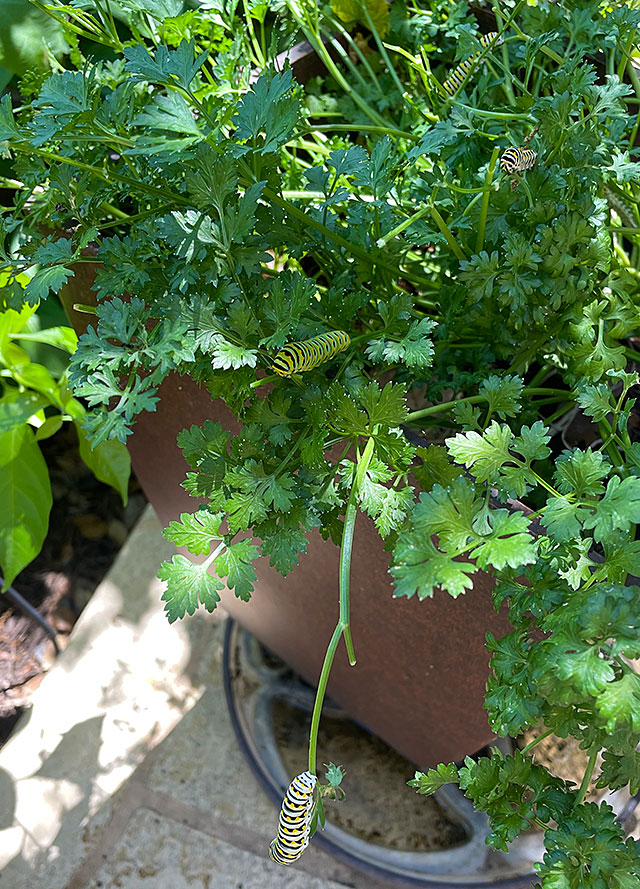 Above: How many caterpillars can you see?
Below: The larger ones in the preceding photo are up to 1.5″ long; those below are .5″ or smaller. 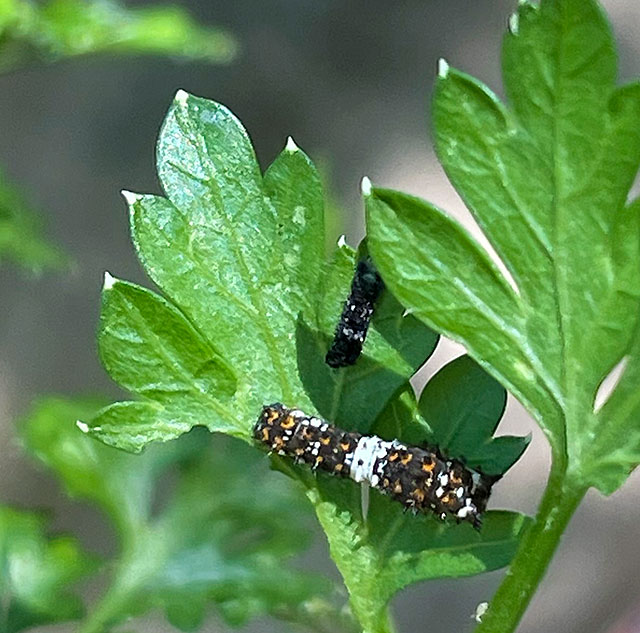 Last year, we didn’t get to observe the full metamorphosis…from larva to adult butterfly. Perhaps we (and they) will be more fortunate this year. Stay tuned!

Sometimes it IS easy being green

The same morning she spotted the caterpillars, she also called my attention to the amaryllis planted in a pot on the back porch. It was home to something much cuter than a butterfly larva. 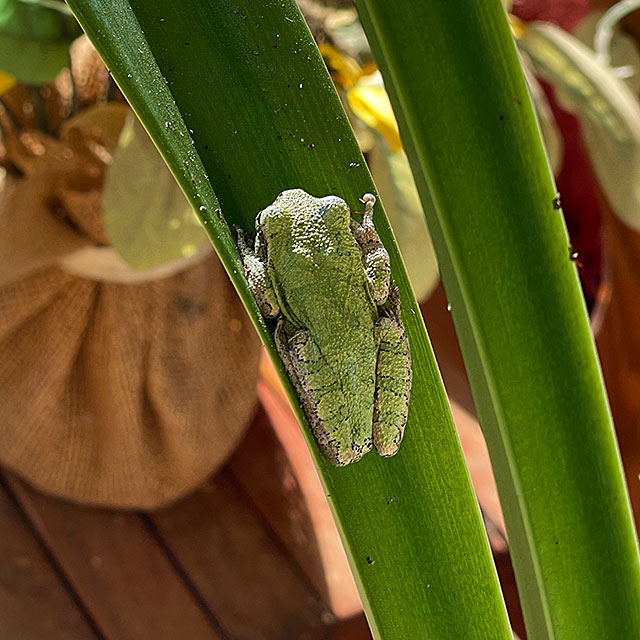 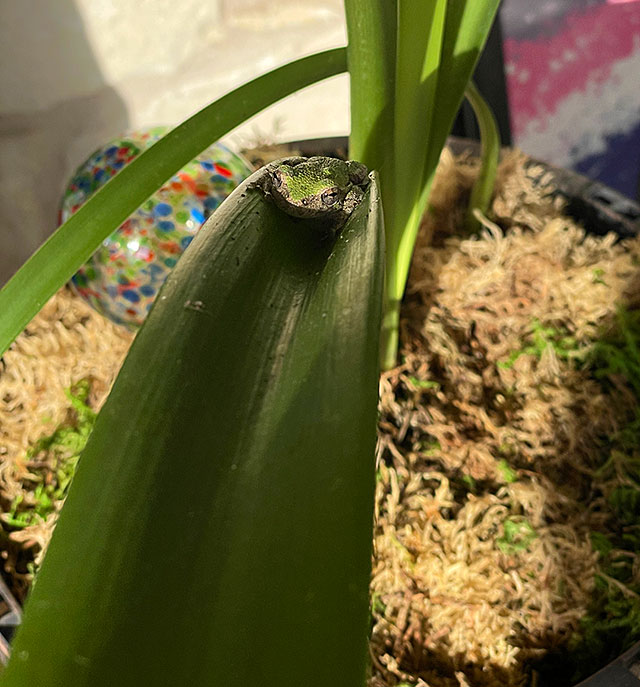 This little tree frog tolerated our presence for a couple of photos. The encroaching sunlight eventually drove it to a shadier resting spot.

The whitetail deer in our area have been stressed by the ongoing drought. They’re eating some of our shrubs that they’ve never before expressed an interest in. Yet somehow they’re ensuring the continued survival of the species.

Debbie and I were inspecting an area next to the neighborhood’s tennis court that is in serious need of some landscape upgrade. We were looking at a scraggly mesquite with a recently-broken branch resting on the ground, and as we turned to walk away, something caught my eye. 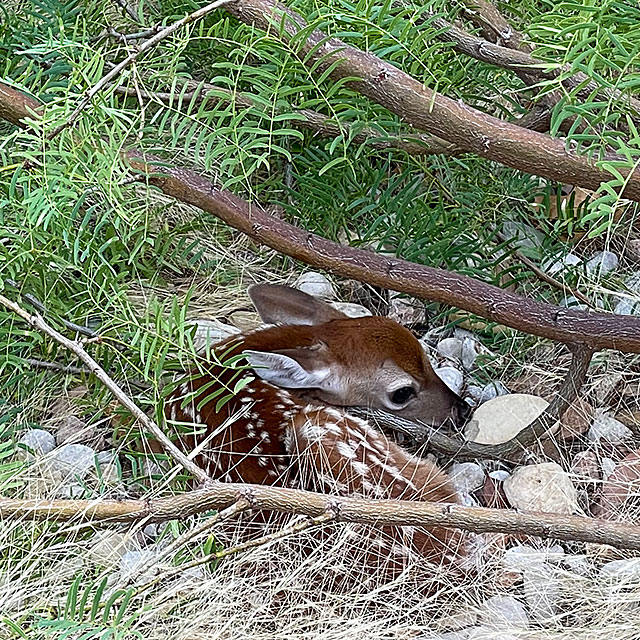 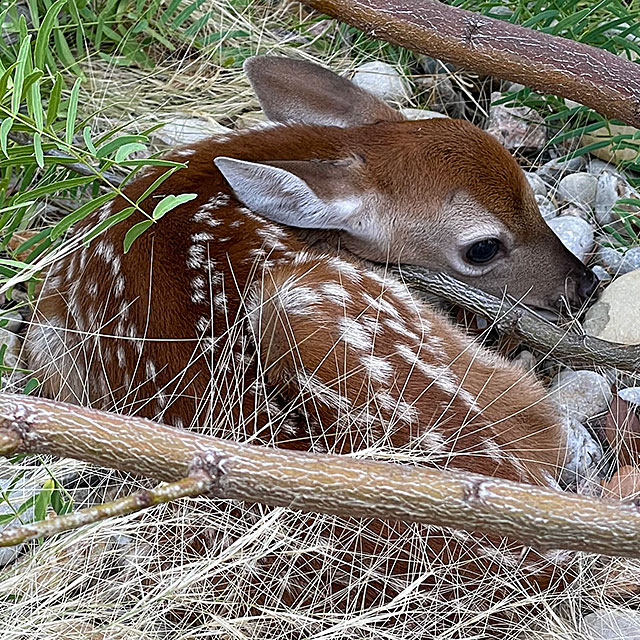 Those are actually two separate photos. The fawn instinctively knows to stay perfectly still in the presence of potential predators. The doe hides her fawn in what she feels is a safe place while she goes off to feed, and later returns to nurse it and to escort it to the next destination. We would love to see this behavior in action, but never have.

And, despite hearing this from multiple sources (and advancing the myth by repeating it ourselves), fawns are not odorless. We apologize to anyone we’ve led astray in the past, but please don’t stress out the next fawn you encounter by getting close enough to sniff it to confirm this assertion.

Who are you calling plain bellied?

We went for a morning run — well, that should be obvious, because see the first photo of this post above — and passing over a bridge near the Ram Rock #9 green, we spotted this snake resting in the water. 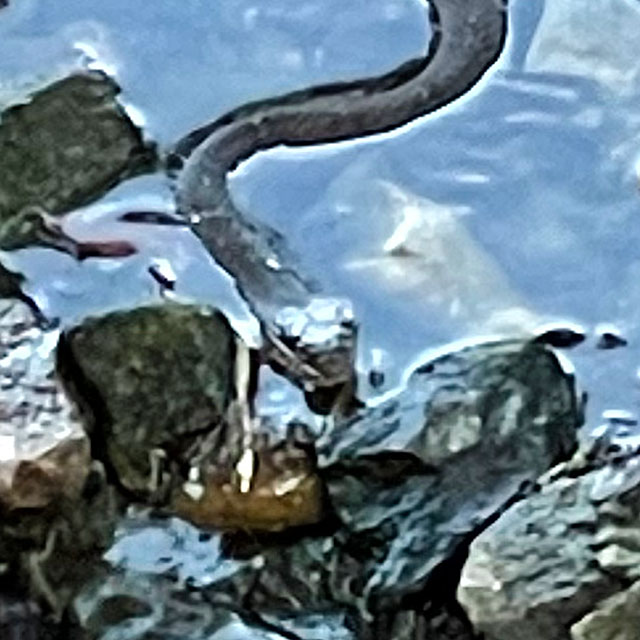 The lighting wasn’t good at that time of day, and I zoomed in a bit too far, so I apologize for the poor quality of the photo. However, I was a bit fascinated by the way the snake seemed to be resting in a channel of water, as if the water couldn’t actually touch it. Anyway, I was pretty sure it was a plain-bellied water snake, and alert Gazette readers may recall that we hosted a rather large one of them in our flower bed a week or so ago.

We ran only a short distance further on the cart path and then turned around in order be off the path before The Deadline (which, by the way, we seem to be the only people in HSB who actually adhere to that rule, but that’s neither here nor there). The snake was still in the same place, but began to swim as we watched, and I got a somewhat better photo. 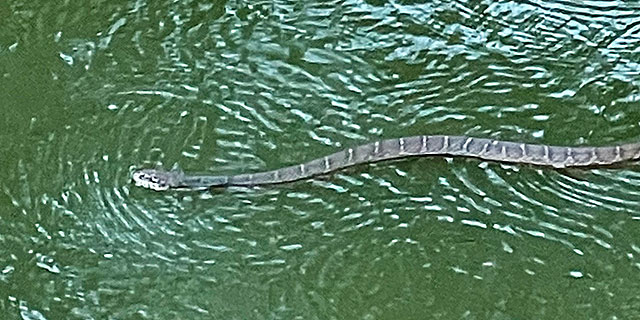 I confess that this view of the snake had me doubting my initial identification, so I queried my go-to experts on Facebook over at the Central Texas Snake ID page for confirmation…which they provided.