I made a couple of jesting comments on Facebook and Twitter about this article describing the first documented case of something called beat deafness, wherein a man named Mathieu “can’t feel music’s beat or move in time with it.” But it’s a bigger problem than those researchers probably realize.

I’m sure that complete beat deafness is indeed rare, but beat “hard of hearingness” is quite commonplace, based on my perception of what often takes place on the dance floor. And this is an indictment of my own skill (or lack thereof), as I occasionally have trouble finding and staying with the beat of certain songs. For example, Unchained Melody gives me fits; I find that I can get started OK, but somewhere along the line the beat just disappears. Fortunately, Debbie never seems to have that problem and can keep us on the beat – and still manage to follow my lead (a miracle in itself).
Musical beat is not just an important issue for dancers. It’s also a big deal for those who provide music for dances. The most popular bands are those who know how to select music that’s easy to dance to (yes, Dick, your teenaged American Bandstand reviewers knew whereof they spoke), and that implies that it has a beat that’s not too fast or slow for the step it’s associated with. Nobody wants to dance to a waltz that’s dragging along at 50 beats per minute, or frantically zooming at 180.
I have newfound respect for musicians who have both perceptiveness and skill to make danceable music. As I mentioned yesterday, we used prerecorded music at our last ballroom dance, and I volunteered to build the playlist. While I included mostly songs that dance club members had suggested or that have been popular at previous dances, I found that some of those songs had multiple arrangements using – you guessed it – different tempos. It was harder than I expected to choose just the right tempo. If I had only used a tool that could quantify differences in tempo, perhaps I could have made better decisions. 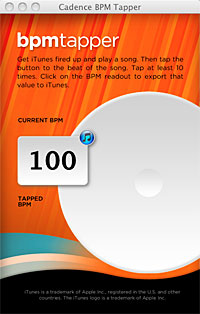 Guess what? That tool exists, in the form of Cadence BPM Tapper, a free desktop application (Mac-only) that allows you to play any song and “tap” along (using your space bar or your mouse button) to the beat. The app computes the beats-per-minute for the song, and if you’re playing the song via iTunes, it will export the computed tempo to the BPM field in that application.
Simple, no? Well, remember my comment about beat-hardofhearingness? I’ve found that some songs are harder to tap along to than others. You also have to deal with the phenomenon where a song may have a very rapid tempo but the dance steps are done according to half-time. That is, a song’s tempo may be 180 BPM but the steps are actually 90 BPM. So, which do you use in iTunes…180 or 90? I finally decided it didn’t matter as long as I was consistent in my choice, for a given step. All rumbas must be analyzed in the same fashion, as should all triple swing songs.
I’ve always wondered why the BPM field in iTunes wasn’t populated, and now I think I have the answer: it’s harder to compute than you might think. I would guess that programming a computer to accurately assess the BPM of all possible songs would be a daunting task. The same company that built BPM Tapper also sells more full-featured applications that work on both Macs and Windows computers, as well as iPhones. Those apps will, theoretically, analyze your entire music library or playlist in batch mode, without the need for you to tap along with any of the songs. However, I’ve been less than impressed with the results, at least on the iPhone version.
The real value of BPM Tapper isn’t necessarily in the absolute calculation, but in your ability to compare songs once tempos have been established for each. If we determine that an arrangement that’s 80 BPM is too slow, then we just need to look for one that’s, say, 90 BPM.
At the end of the day, I’m just glad we didn’t have Mathieu manning the BPM Tapper. I suppose there’s a certain amount of prestige to being the first person identified with a disorder, but I’d rather be able to dance better than Elaine.