Remember the “Create a Haiku to Win a Cheap Fire Ant Wristband” Contest? An impressive number of you apparently have a lot of time on your hands, because we got some great entries from around the world, literally, including New Zealand and Singapore.

I’m still waiting for some photos of those lovely gifts set in exotic locations, but Li-Ern – who scored extra geek points by evoking Gollum’s psychotic greed, and fonts, in her poem – has provided a couple from Singapore. Click on the small images below to see a larger version of each. (If you’re skeptical that these pictures actually originate from Singapore, you’ll just have to trust me. I’m the one who had to fill out the ridiculous DHS form to get the mailing through customs.)

I’m impressed with her use of one as an anklet. Following her lead, I managed to pull one over my foot and onto my ankle, but after a few minutes my foot began turning blue and I’m pretty sure that’s not a good thing. 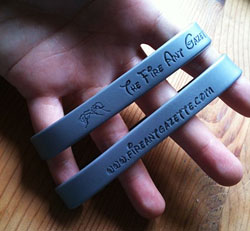 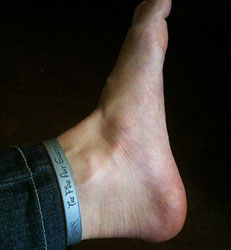