Well, when you’re down on your luck,
and you ain’t got a buck,
in London you’re a goner.
Even London Bridge has fallen down,
and moved to Arizona,
now I know why.

Midland has four “sister” cities, one each in China, Mexico, Guyana, and the United Kingdom. I’m not sure about the significance of having (or being) a sister city, despite the aforelinked website’s repeated references to “common economic interests.” Perhaps someone anticipated that we’d be sharing things with one another.

We are a British TV company looking for a Midland, Texas family who would like to take part in a NEW TV SHOW.

Would you and your family like to travel to the UK and act as ambassadors for Midland?

Would you and your family like to swap lives with a British family from the Wirral (your sister city) for one week?

And I’ll substantiate the rumor that the English sense of humor
is drier than than the Texas sand.
You can put up your dukes, and you can bet your boots
that I’m leavin’ just as fast as I can.

The casting producer at a television production company called Knickerbockerglory emailed me this morning to see if I could assist her in finding a family in Midland who was willing to trade places for a week with a family in Wirral, UK. The purpose of the switch is to provide fodder for an episode of a new reality series the company is developing, a “primetime” show called Twin Towns. Here are the details in her own words:

I hope you don’t mind me emailing. I’m currently working on a brand new exciting primetime TV series called ‘Twin Towns’ where families from the US will swap lives with families from the town their home town is twinned with in the UK.

We are looking for families from Midland, Texas who will get the chance to have an all-expenses paid trip to the UK where they will spend a week living in the Wirral which I believe you are twinned with or have a friendship with?

The family we choose will get to act as US ambassadors for Midland and will get to see how the other half live by living the life of the British family they swap with for a week. This will include swapping houses, jobs, children will go the local schools/colleges, they will get to meet the community and experience the local culture as a whole.

We are looking for fun families who would be available for a week between the dates of 16th April and 31st June and would be interested in being on television. 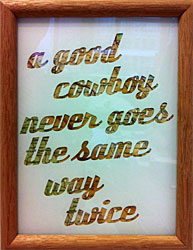 Pretty interesting, huh? It’s legit, as far as I can tell, and sounds like an great opportunity for an adventurous family with a flexible schedule. How could you go wrong with a group of Brits who have a framed cowboy quote on their wall? (Even if it is a rather inscrutable quote. Most cowboys know that stray cattle wander down the same paths. Perhaps I’m too literal.)

But I can’t help wondering how the production company will assess the “fun” quotient for prospective families. Are they looking for the quintessential West Texas family…and how would one even go about defining that?

Well, it’s cold over here, and I swear
I wish they’d turn the heat on.
And where in the world is that English girl
I promised I would meet on the third floor.
And of the whole damn lot, the only friend I’ve got
is a smoke and a cheap guitar.
My mind keeps roamin’, my heart keeps longin’
to be home in a Texas bar.

Regardless, if you have a “fun” family and think this is your cup of tea, feel free to email the company and get more information. Just don’t plan on taking Jerry Jeff Walker with you, other than on your iPod.

I wanna go home with the armadillo
Good country music from Amarillo and Abilene
The friendliest people and the prettiest women you’ve ever seen.

[Lyrics from London Homesick Blues…but you knew that]