Even though there is some Biblical support for the adage that if you want to hear God laugh, tell Him your plans, I’ve never bought into that concept except as it applies to plans that are clearly contrary to His will. And so when I tell you that we took our bike to Fredericksburg for a long weekend of riding and ended up getting on it not even once because it rained every day, don’t believe for a second that I think God broke a region-wide drought just to foil our plans.

Not that it didn’t cross my mind.
But I do believe that when a door closes, a floor opens, and thus we found ourselves in the happy position of dancing through an entire Memorial Day weekend, in ways we never imagined. But I’m getting ahead of myself. And I hope you’re intrigued enough to stick around for yet more vacation slides.
But first, you need to know that I now plan to devote my life to becoming the premier frottoirist in Texas, if not the world, as I’ve come to realize that the rubboard represents the pinnacle of musical achievement in the history of mankind. There’s really no higher calling. We booked three nights in the “Gabrielle” unit of the Patio Sisters bed & breakfast (motto: “big bed…no breakfast”). If you follow the preceding link, you’ll see a professional presentation of the photos I took, shown below, except you’d never know there was a toilet by looking at the professional pictures. So I recommend going with mine, especially since I spent so much time on them. But it’s your call.

Here are the takeaways from the weekend’s accommodations:
Pros:
Cons:
There was a time when I’d have listed “no breakfast” as a drawback, but the current standard seems to be to provide certificates good for breakfast (or, frequently, lunch) at local eateries. In this case, we had certificates for $7 each for each night’s stay, and the restaurants were ones we liked anyway (Bejas Grill, Rathskeller, Java Ranch, etc.). The certificates never cover the entire cost of a meal – at least, not the way we eat; YMMV – but it’s a nice gesture, and beats the meager “continental” breakfasts served by many B&Bs that still give lip service to the second “B.”

I already touched on that above, so we may as well round things out. Frequent visitors to Fredericksburg will recognize the following:
Oh, and this… It rained on and off through the weekend. Did I already mention that? So the time that we would have spent on the bike was instead spent going through every store on the main drag. Every. Store. Fortunately (for me), the only thing we bought was foodstuffs, and empty calorie stuff at that.
That means we passed up some real finds. 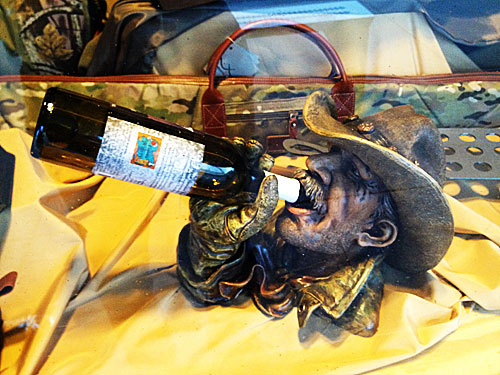 This would be an elegant addition to any decor

The Texas Hill Country has not completely escaped the drought that has ravaged most of Texas, but it’s faring pretty well this year – especially after last weekend. Did I mention that it rained all weekend? San Antonio got some historic, flooding rainfall, and while Fredericksburg wasn’t similarly afflicted, I suspect that over the next week or so the landscape will start to display the luxurious green hues that should be the norm. Also mosquitos, stifling humidity, and fire ants, but what’s lemonade without a few lemons?
I understand that the bluebonnet crop wasn’t quite as good this year as in the past, but that doesn’t mean that the wildflowers didn’t make a showing. You don’t have to get out of the city limits to enjoy nature. This guy was sunning just a block from Main Street. Witness some of the worst looking legs and feet in the Animal Kingdom
We went for a walk around the neighborhood at dusk on Sunday, and were mesmerized by the sight of dozens of fireflies twinkling all around us. Fireflies make make even really good things better.
We also drove through a number of neighborhoods, with an eye toward possibly investing in some real estate at some point. There were some very nice neighborhoods where people had seemingly neglected their properties, as we saw broken and even boarded-up windows. This was puzzling and a little disturbing until we learned that the town had been hit by a monster hailstorm about a week earlier…softball-sized hail had done a number on houses across the north side of Fredericksburg. We saw big agave plants that had been smashed to jelly, and oak trees stripped of their foliage; cars were missing moonroofs, and houses had tarp-covered voids where skylights once resided. Bad mojo, and the only thing that would have kept something like that out of the news was the F5 tornado that tore through Oklahoma the following day.

Entertainment (“Here there be dancing”)

You perhaps heard that it rained most of the weekend, thereby stifling our cycling plans. We even skipped our planned outing to Luckenbach on Friday night, not wanting to deal with the muddy conditions. But we’re nothing if not adaptable. As it turned out, the annual Crawfish Festival was taking place within walking distance of our B&B, and for $15 each, we got weekend passes to live music starting around lunch each day.
Variety was the musical theme for the weekend. On Friday night, we danced to country music by Jake Hooker and the Outsiders, on Saturday night we danced to big band ballroom music (at the Hangar Hotel, at a fundraiser for the USO) provided by Bill Smallwood and the Lone Star Swing Orchestra, and on Sunday afternoon we boogied to zydeco as performed by Jean-Pierre and the Zydeco Angels. And somewhere in there we squeezed in some Latin moves to an arrangement of Santana’s Black Magic Woman as ably rendered by the Walburg Boys (who, in an awesome display of musical versatility, also provided some of the best yodeling we’ve ever heard, although, frankly, that’s not saying all that much).
There’s something about copious amounts of crawfish and Cajun music that makes otherwise normal people make questionable choices in haberdashery. Beer might have also ma
de a contribution. Head-mounted crustaceans: cutting-edge fashion trend
The dance floor at the Hangar Hotel was small and tacky (in the sense of being sticky, not in poor taste, although to a dancer the two are synonymous). Also, because the orchestra had “swing” in its name, and there was a swing dance lesson beforehand, most of the dancers seemed to feel obligated to dance swing steps to every song, which made doing foxtrots and waltzes somewhat challenging. But it’s a rare thing to be able to dance to a big band doing the standards of times past, and we enjoyed it thoroughly. All reet, you jive hep-cats
The floor was slightly less crowded at the Crawfish Festival, especially on Sunday afternoon. The thing about good music and an open floor is that it leads to, well, dancing…and that dancing can originate from unexpected (but delightful) sources.

So, what’s your excuse?
That gentleman rolled in with his walker and spent most of the afternoon twitching in his chair until he finally couldn’t stand it any longer and had to give in to the urge to surge.
The music, by the way, was provided by the aforementioned Zydeco Angels.

That’s Jean-Pierre on the squeezebox, but the real star is, of course, the rubboard player. Did you know you could get special rubboard gloves? They’re the mark of a true professional; here’s a closeup: Actually, these are very high-tech compared to most, which use either bottle caps or thimbles to generate the percussive sounds. Also, rubboards (aka frottoirs) are not exactly cheap. But I’ll let nothing stand in my way of becoming a world-class washboardist, so I’m cashing in my 401K. Pretty soon.
So, we didn’t get to bicycle around some of our favorite haunts, but we didn’t let the rain dampen our enthusiasm. It pays to have a fallback passion, one that doesn’t depend on the weather. As long as we can find some good music and a bit of floorspace, we’ll do just fine. And last weekend, Fredericksburg repeatedly rose to the occasion.