Skip to content
We left Palmetto Bay (which I’ve written about here and here) to make a day trip to Savannah, which is about twenty miles away, although it drives much longer. (Seriously, South Carolina…60 mph on your interstates? We have school zones in Texas faster than that.) 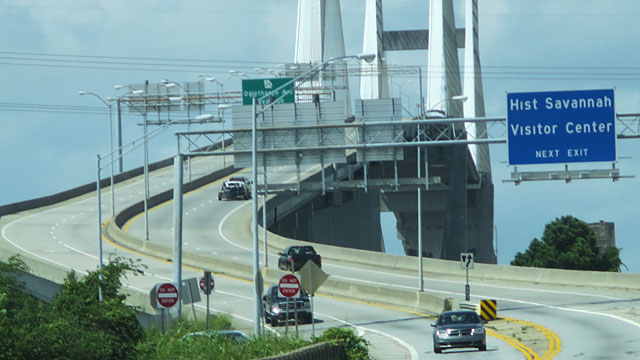 OTOH, they do have some impressive bridges.
Savannah drips with history. Also with humidity. Weather-wise, that was our most uncomfortable day of the week, and it was made worse by the amount of walking we had to do, thanks to the trolley tour. Allow me to explain, and take this as a cautionary tale.
We decided the best way to see Savannah was via one of the ubiquitous trolleys, complete with knowledgeable tour guide, so we spent $50+ on a 16-stop tour; the package included the entry fee to a cultural museum along the way.
We were trollied (is that a word?) from one overheated parking lot to another stifling parking lot where we boarded the real trolley (not the shuttle trolley), and the tour began. The first stop was in a shopping district, and we elected to disembark in order to buy a tote bag to replace the one we had conveniently forgotten to bring. We wandered around a bit and then re-boarded another trolley to continue the tour. 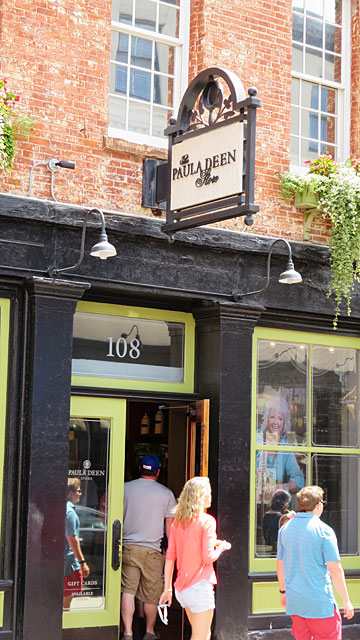 A museum dedicated to that great Civil War heroine, Paula Deen
We hit the jackpot with that tour guide, a transplanted Brit named Michael who dispensed a steady stream of interesting historical trivia mixed with relevant current cultural references; it was fun to hear an oral history of the Old South dictated with a Cockney accent. (Was it really Cockney? I don’t know; who do you think I am, Rex Harrison?) He was a wealth of information that I suspect you could find nowhere else. For example, we learned that Savannah was captured by General Sherman, who had the advantage of a fleet of biodiesel-powered tanks, during the Civil War. After taking a trolley tour of his conquest, Sherman gave the city to Abraham Lincoln as a Christmas gift. Lincoln was later overheard complaining that he’d rather have gotten a tie. I might be paraphrasing some of this, but you get the general idea.
We stayed with Michael for several more stops, until we came to the above-referenced museum. We didn’t really want to leave the relative comfort and relevant narrative of the trolley, but felt compelled to display some cultural leanings by going through what turned out to be The Most Boring Museum In History. After a half hour of feigned interest, we went back outside to await the next trolley. We had apparently just missed it, because we had a long wait, and when it finally appeared, guess what? It was full, and no one got off! Apparently, we were the only tourists in Savannah who failed to read the memo regarding the MBMIH.
It was now midday, and we decided to find a place for lunch, with the assumption that the trolley hunting would go better on a full stomach. The MBMIH wasn’t located in a hotbed of gastronomic delights, but we did happen across a small diner called Clary’s Café (Where the staff is just as much fun as the food!). If that name sounds familiar, you have a better memory than me, because you obviously recognize it as a key fixture in the movie Midnight In the Garden of Good and Evil, taken from the two-decades-old best-selling novel of the same name written about a couple forced to spend their lives waiting for a tour trolley in downtown Savannah. Or something like that. I read the book; I don’t remember much about the plot (obviously), much less the name of a diner that the filmmaker must have liked or disliked enough to shoot it. [And, by the way, it’s amazing that with the hundreds of years of legitimate history bound to Savannah, that particular book and movie – along with Johnny Mercer – consumes an inordinately large proportion of attention from tour guides, in an apparent nod to the small appetites tourists have to actual old-timey historical stuff. Events that form the foundation of our nation and society? We’ll pass. Spicy anecdotes about movie-set romances? More, please.] 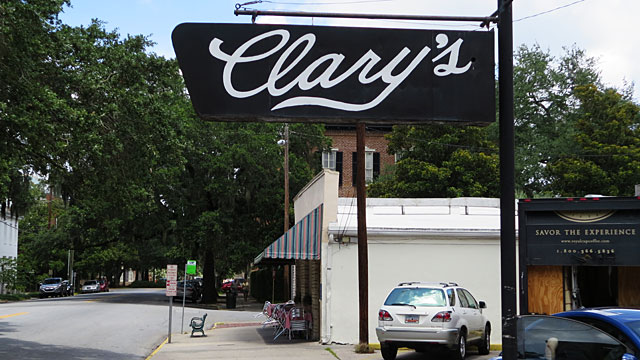 Anyway, we had a pedestrian meal in a semi-famous café. Clary’s claims to be famous for its Reuben sandwich, and I like Reuben sandwiches, so I ordered one…only to be told that they were out of rye bread. But they did have excellent French fries, so it wasn’t a total loss.
After lunch, we trudged down to the next trolley stop in hopes of completing the tour, only to find we were behind at least a dozen other hopeful boarders. After the obligatory 20-minute wait, the next trolley pulled up, and about six people got off the full shuttle. At that point I made the decision to cut our losses and pull the plug. It was hot and muggy, plus we were on the edges of a passing thunderstorm and our umbrellas were safely locked away in our rent car. So we walked a mile or so back to the parking lot, slumped into the stifling interior of the car, and drove away from Savannah.
The only historical tidbit that has stayed with me is that when a statue shows a horse-mounted rider looking down and back, it means that the rider died from battle-inflicted wounds. Had I not had a healthy sense of self-preservation, that’s the posture I would have assumed driving back to Palmetto Bluff. 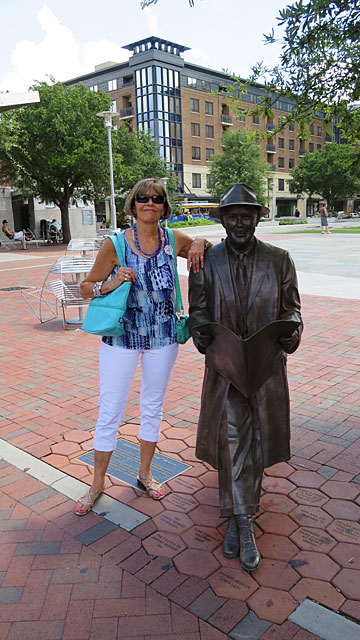 Debbie and another tourist who stayed too long in Savannah