The final leg of our South Carolina vacation (about which I’ve written here, here, and here) took us to Charleston, which takes its name from some historic figure (either Charlie Chaplin or Nick Charles, as I recall, although my memory is a little fuzzy).

We arrived on Wednesday afternoon, following a rather harrowing drive through one of the heaviest downpours either of us have experienced. Our hotel was located in the historic downtown area [you can pretty much tack “historic” onto any Charleston-related noun and be OK] which doesn’t have the most driver-friendly layout in the world. But thanks to our geographically astute disembodied GPS guide, we made every turn correctly and arrived in pretty good shape. We were immediately greeted by Sam, the bell captain, who, upon learning our names, called us by them every time he saw us for the duration of our stay. I assume he did this for all the hotel guests, and while the hotel consists of only 50 rooms, that’s still an impressive performance.

The hotel? It was the French Quarter Inn, and it reeked of elegance. Here’s a quick photographic tour; you know the drill – click on the little pictures to see the big ones.

The hotel is only a couple of blocks from the historic Charleston Harbor, and the historic Battery (dontcha call it “Battery Park,” unless you’re a Yankee and don’t know any better) is a stroll of a mile or so past many historic fountains, historic mansions, and historic other things. 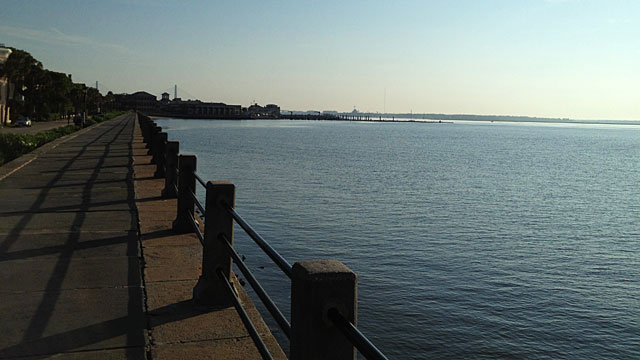 A rare moment without sweating, wheezing runners, while strolling along Charleston Harbor 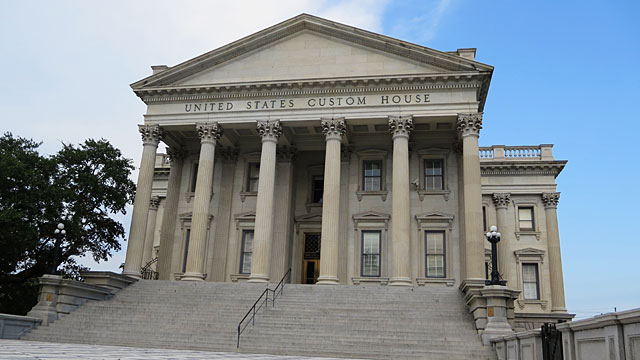 The US Custom House is rife with pediments, entablatures, dentiled cornices, and balustrades. Why, it even sports an architrave. 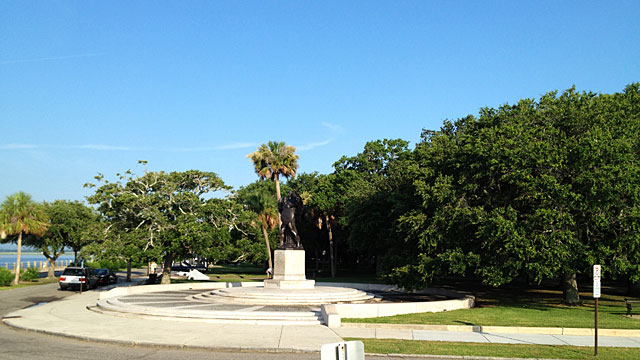 The Battery has many statues of historic figures looking solemn or stoic. The more important ones managed both looks. 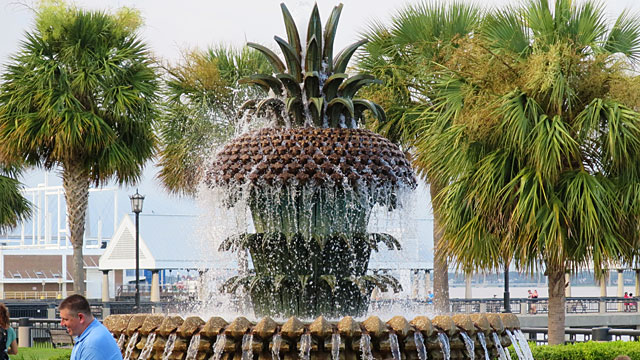 There were many historic fountains, generally filled with urchins. The human youthful kind, not the spiny sea creature kind. Did you know that the pineapple is the Old South’s version of a welcome mat? 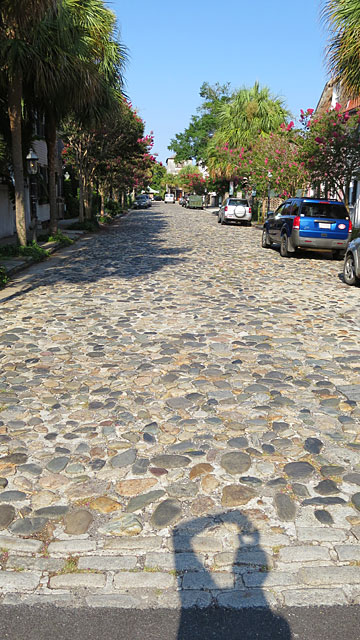 These are some serious cobblestones. Also, I was apparently
adjusting the handle on my head when this photo was taken
. 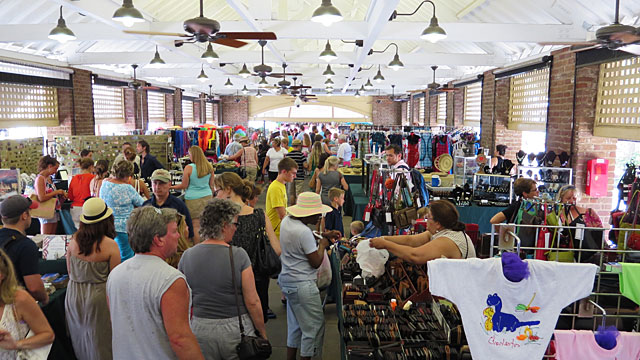 Our hotel was just a block from the historic Charleston City Market, which resembled a series of brick doublewides filled wall-to-wall with sweaty people. We bought stuff. 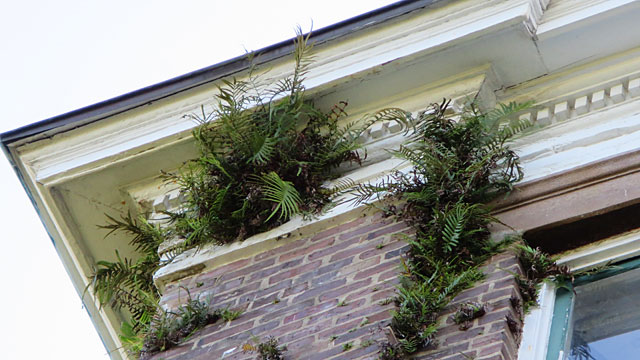 I’ve seen ivy-covered homes before, but I’ve never seen ferns growing near the roofline of a three-story mansion.
You’d have to be awfully good with a weedeater to take care of that. 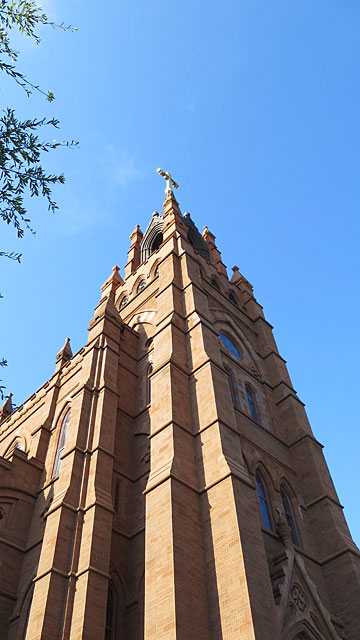 Charleston has many historic and/or old buildings, like The Cathedral of
St. John the Baptist. Many photographers suffer from chronic neck cricks
.

I know I’ve been a bit irreverant with my commentary (ed. – ya think?), but the old downtown area of Charleston really is made for walking, and the beauty of the city is undeniable. It’s full of architectural wonders adjacent to high end shopping and enough wonderful restaurants to rival any major metropolitan area.

We were about a mile from the South Carolina Aquarium, so we strolled down one morning and spent several interesting hours dodging the approximately eight million eight-year-olds who had descended like seagulls on the carcass of an exploded Great White Shark. Actually, watching and hearing the kids’ reactions to some of the attractions was part of the fun…especially the poor kid who sat behind us in the 4D National Geographic Sea Monsters theatrical showing, and midway through the mildly scary film started blubbering and pleading for “someone PLEASE take me out of here! Please take me out!!” I suspect he had nightmares filled with marine dinosaurs for weeks, poor little guy. 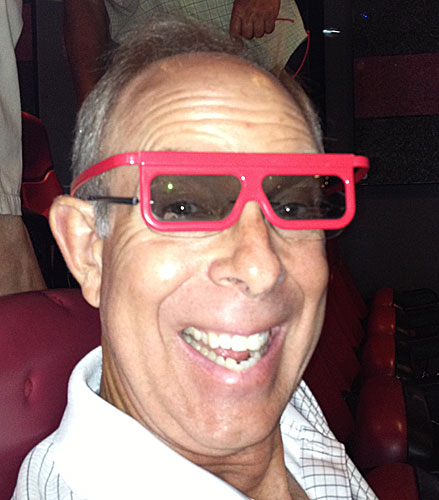 I’m pretty sure the kid was frightened by what was on the screen, and not by what was in the next row.

Hands-on exhibits are apparently a big deal now at aquariums, and this one let kids stroke stingrays – I couldn’t help thinking, “Crikey!” and wondering what’s next? Let’s put a brown recluse spider down your sock and see what happens! – and fondle sea urchins. I stepped on a sea urchin once in Jamaica, and the only future encounter I want to have with one will be with me wielding a 5-pound sledge and a blowtorch.

We try to visit aquariums wherever we go and Charleston’s ranks right up there on the Fun Scale. It’s actually a combination aquarium and zoo, with small exhibits of birds, reptiles, and mammals, along with showcasing the typical watery denizens…including a two-story 385,000 gallon Ocean Gallery complete with miked scuba divers who narrate and take questions from the audience about the swirling sealife that surrounds them. Very impressive. Here are a few other scenes from the aquarium. 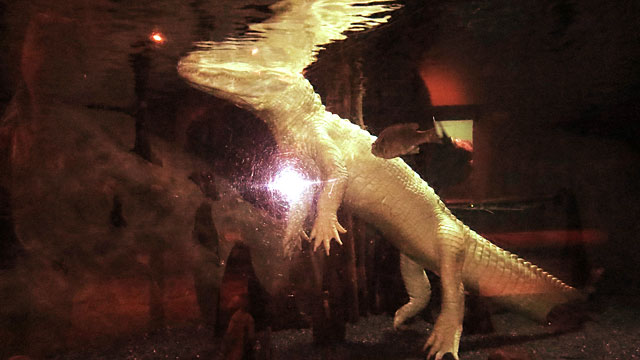 They claimed this albino gator was alive, but we watched it for approximately 14 hours and never saw it move.
It was only later that we learned we’d been looking at a poster for the gator exhibit. 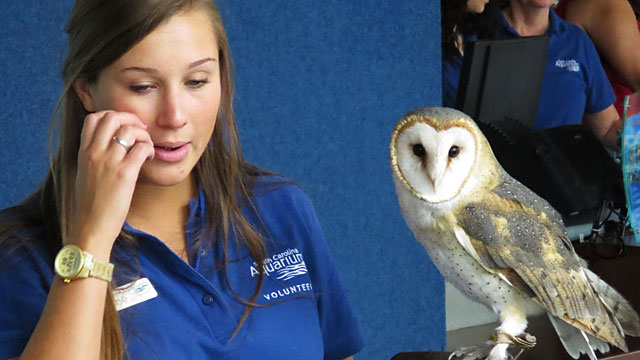 Did you know that some owls really aren’t all that wise? 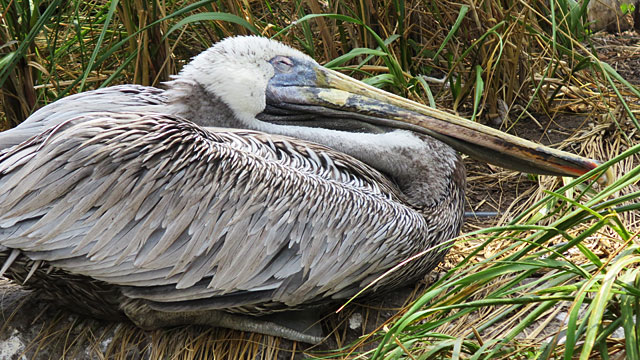 What do pelicans dream about?

One of the exhibits was entitled Madagascar Journey, featuring the habitats and inhabitants of the island. It included a large lemur exhibit (well, the lemurs were pretty much regular size) with a tunnel that kids could crawl through and then pop up into a plexiglass dome in the middle of the action. Of course, if you know lemurs, you know that their primary action is sleeping, but I’m sure that between naps they were entertained by the kids.

On the way into the exhibit, we noticed a huge crowd pressed up against a small glassed-in enclosure. There were too many people to tell what it was, but everyone was rapt in their attention to whatever that enclosure contained. By the time we left, the crowd had thinned and we understood what had them excited. It was feeding time in the python cage, and the main course starred a little white rat. I tell you this up front so that you can scroll past the following pop-up photos if you so choose. (Weenie.)

Our last day in Charleston was actually spent in the water in Mount Pleasant, which is located just across the Arthur Ravenel Jr. Bridge. South Carolinians seem to be proud of their bridges, and I can see why. 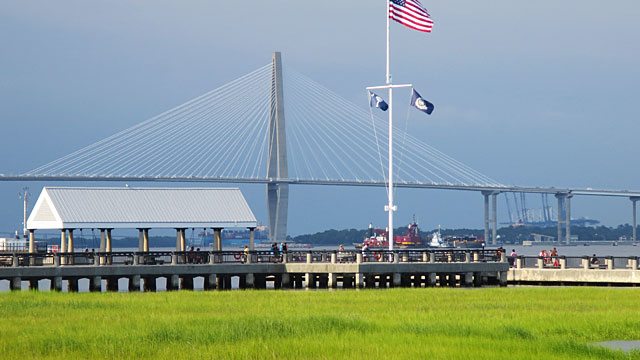 This bridge actually has a great bike/walking path along its entire span, and there were scores of people taking advantage of it.

We rented a couple of paddleboards at Nature Adventures Outfitters, where you launch directly onto Shem Creek, a quiet waterway that’s practically teeming with dolphins. A couple of them surfaced close enough that we could hear them exhale and see the spray from their blowholes. 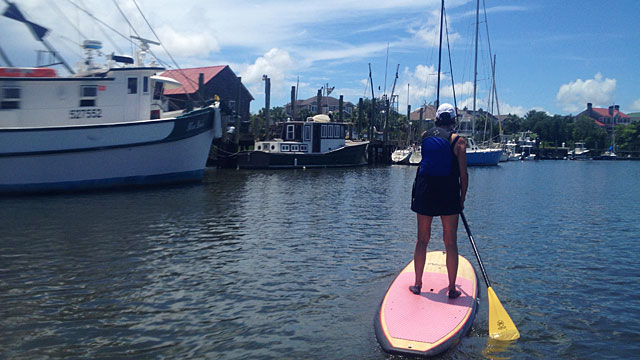 Debbie keeps an eye out for dolphins on Shem Creek.

Shem Creek opens onto Charleston Harbor, and if we looked closely, we could see the general area of our hotel in the distance. Paddleboarding in open water is a bit more challenging than in the calm of a sheltered creek, but the only trouble we experienced was when a jerk in a speedboat pulled up right behind me and gunned the engine, trying to knock me off the board with the resulting wake. (Didn’t work.) 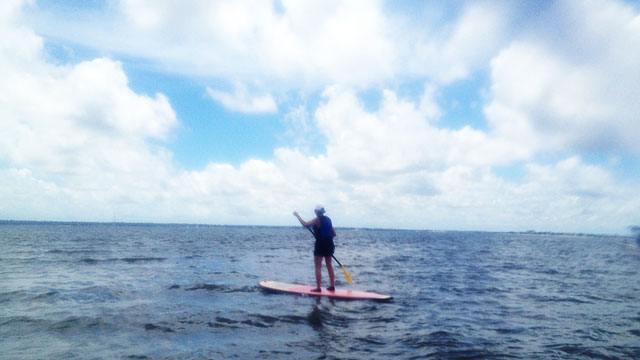 The Gilligan’s Island theme song kept running through my head.

We headed into a freshening breeze (that’s sailor talk, of course), and eventually got close enough to the Crab Bank Seabird Sanctuary to realize that the noise and the smell were sufficient to convince us we didn’t need to get any closer. In any event, there’s a bigtime fine associated with going ashore on the 22-acre sandpit island, which hosts an amazing variety of birdlife.

At the same time we were heading into the Harbor, a huge container ship was coming in. The ship was the MSC Heidi, a 1,089′ 108,000 ton deadweight container vessel registered in Panama. I figured it was a couple of miles away from us, but we turned around and let the boat’s wake carry us back toward land. The Heidi ended up docking close enough that we could see it from our hotel window, and I would have loved to see the gigantic container cranes unload it, but I never saw it happen. 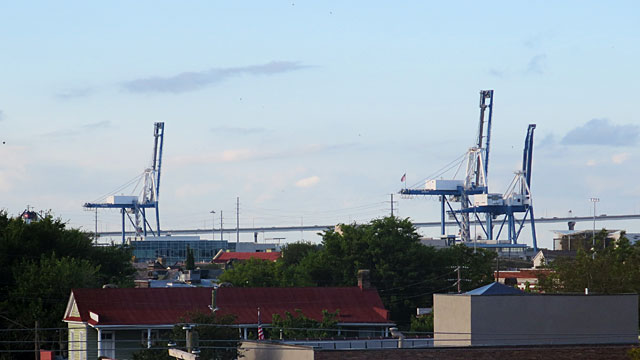 It’s difficult to imagine just how honkin’ big these cranes are. 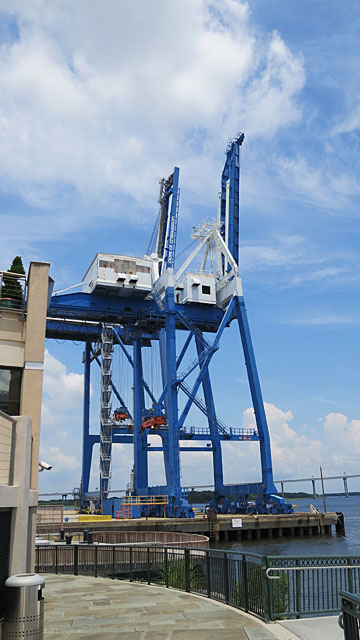 They reminded me of something out of Star Wars or War of the Worlds.

No Charleston trip report would be complete without talking about the food. Oh my. Each restaurant tried to outdo its competition in trumpeting its fresh, locally-sourced seafood and produce, and every meal was memorable. We ate dinner at three different restaurants, each one with a very different approach:

The complimentary breakfasts at the French Quarter Inn were up to the standards you’d expect from a highly-acclaimed hotel. No sign of DIY waffles or little boxs of Raisin Bran. Instead, they offered DIY mimosas and fresh berry-and-yogurt parfaits, individual breakfast quiches, chocolate-filled croissants (Tristan provided their pastries, and those we could recognize – and appreciate), and much, much more.

Charleston turned out to be a great place to visit and we’ll make it a part of any future trips to South Carolina.