My pal and former Midlander Bear Mills has published a new novel entitled The Ecuadorian Deception (available via Amazon.com in Kindle and paperback formats). 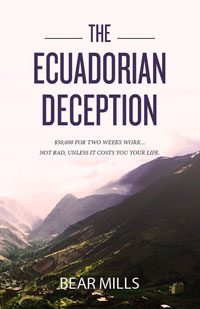 I finished reading it over the Christmas holiday and I recommend it to anyone who enjoys suspense novels seasoned with a healthy heap of [obscure] history.

I’m not a huge fan of the suspense/mystery genre and I can count the number of historical novels I’ve read on the fingers of one hand, but I stayed up well past my usual bedtime to finish this book, and my wife will attest to the fact that I never forego sleep for reading.

There’s not much I can tell you about the book’s plot without spoiling it. As you might surmise, most of the action takes place in Ecuador. The main character is a freelance website developer who has been lured to South America by an offer from a mysterious would-be employer. The offer is short on details, but lucrative enough to cause him to ignore some warning flags. (Take it from me, a $50K project will get any freelancer’s attention.) And, sure enough, he gets his mule in an ant bed in pretty short order. The plot is thick with nefarious characters and ancient Incan treasure.

The book is rich with the kind of details – cultural, geographical, and historical – that accompanies writing that’s not only well-researched, but personally experienced by the author. Indeed, Bear has spent time in Ecuador, in the exact locations where the action takes place. And as a former Texas Teacher of the Year, he understands the importance of accuracy in details.

The Ecuadorian Deception is also notable for what it doesn’t have. I daresay that you’d have to go back to the days of Agatha Christie to find a mystery novel that contains no profanity, no lurid sex scenes, and no graphic violence…and yet still manages to maintain a high level of suspense and excitement.

While you won’t find this on a book jacket, Bear is an evangelical Christian, and he embeds his values into his plot and writing style. Here’s what he has to say about how his faith affected his approach to writing this novel.

I love mysteries, but many of them are laced from cover to cover with vulgarities. The F word must be the perfect word because it’s a noun, verb, adjective, adverb, invective, preposition, and exclamation. I wanted to write a thoroughly entertaining novel that was free from cursing, but was gritty and even a little scary. If the novel is a success, maybe others will get on the profanity-free train with me.

I wanted to show how faith played itself out in the real world, a world where tragedies happen and bad people do bad things to good people. Author Craig Groeschel, a pastor up in Oklahoma, has written that when bad things happen, we need to stop saying, “God, why me?” and start saying, “God, what now? What do you want me to do? How do you want me to respond that will glorify you?” That’s what I wanted to play out in the book.

[As you might guess, I’m all in favor of this trend. If you feel the same way, I can recommend a couple of other authors whose faith informs their novels. John Bush’s Knox’s Irregulars boldly integrates Reformist theology into a hard science fiction shell, while Jared Wilson, who is a pastor in real life, has crafted a gripping tale of the supernatural entitled Otherworld.]

Bear doesn’t have the luxury of being a full-time writer; he has a day job to pay the bills. But he’s working on two sequels to The Ecuadorian Deception. Again, in his words:

The sequel, The Ecuadorian Assassin, is about halfway done on first write through. My goal is to have it out by January of 2015. It is much more political in nature, dealing with the tense relationships between the US and Ecuador, especially since Ecuador has been courting Iran, Venezuela, and Cuba as prime political allies, but needs US tourism and expatriate relocation to pay the bills. Like all good sequels, it brings back many of the characters from the first book, with [main characters] George and Hugh at the center of things. The third book in the series is projected for release in 2016.

This is a great first effort and I look forward to more from Bear.