During a recent stay at Horseshoe Bay we made a day trip to Fredericksburg, primarily to eat lunch at the Peach Tree Restaurant, but also to browse through the approximately 800 stores crammed into the three-block downtown shopping area. We didn’t anticipate that we would leave far more cultured than we arrived…not that that would be a steep hill to climb.

For the record, an overcast 35° mid-week day in early January is the best time to visit F’burg if crowd avoidance is your goal. The Java Ranch Espresso Bar and Café was doing a brisk coffee business, but most of the other shops were barren of customers.

Most of the clothing shops cater to women (shocking, I know), but I did manage to score some awesome ankle artwork at one store. My sock drawer is beginning to rival the Louvre, now that it houses socks displaying (l-r, below) Manet’s The Fifer, (2) Toulouse-Lautrec’s Moulin Rouge: La Goulue, and (3) Botticelli’s The Birth of Venus. 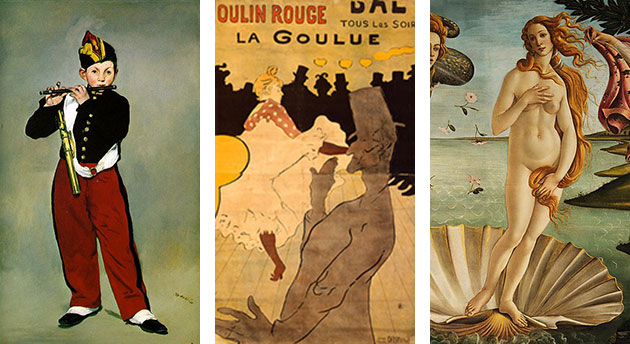 Perhaps you scoff at the idea of cultured footwear, but if you bothered to follow the links I’ve helpfully provided – we’re all about education here at the Gazette – you’d be able to quote the following fascinating facts that are guaranteed to make you the life of any party:

Our last stop at the end of the day was at the River Rustic Gallery. We arrived at precisely 5:00 p.m., not realizing that was the art gallery’s closing time. The woman coming out the door as we were going in was actually the manager who was about to lock up. We apologized, explaining that we were just browsing, and started to leave, but she insisted that we come in and look around, assuring us that she had nothing better to do.

This is a relatively new gallery in F’burg, and while it features work from a variety of artists, its focus is on the rock art of Carlos Moseley. And by “rock art” I mean that rocks are literally both his canvas and palette. (If you haven’t been to Fredericksburg in a few years, you might remember that he had his own gallery next to the Old German Bakery and Restaurant.)

One piece in particular stood out, a “painting” entitled Two Stepping. See if you can figure out why it caught our eyes: 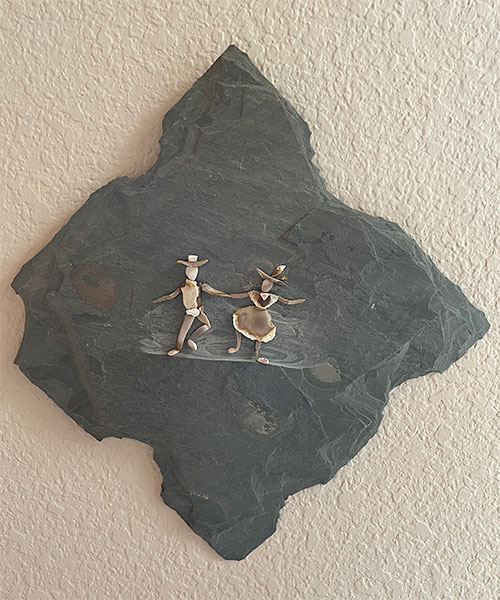 One of our favorite themes in art features fish, and the gallery had a couple of different pieces sculptured from stainless steel from an artist named Bear McLaughlin. Bear is also known as Tammy (yep, she’s a she), and hails from Colorado. Based on the little I can find about her on the web – this article is the most insightful I could find – most of her work tends toward a grand scale, but this piece of wall art, entitled Big Fish, is an exception: 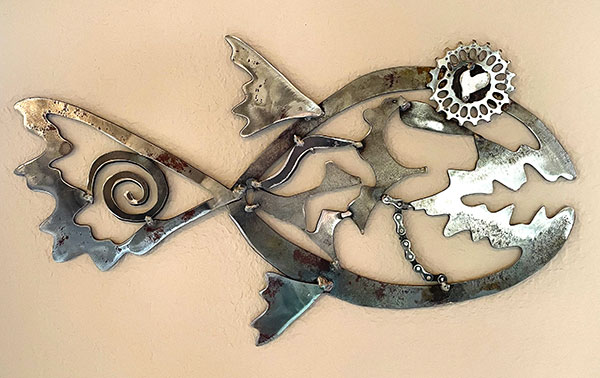 Incidentally, I hope we in some small way compensated the kind woman for keeping the gallery open for us as both of these pieces now adorn a wall in our Horseshoe Bay home.

But the preceding examples of fine art were far from the only cosmopolitan culture we acquired during the day in Fredericksburg. I leave you with a view of a wonderful little piece of kinetic sculpture, title unknown. We didn’t buy it, but the next time we’re in the market for a puking chicken, this will be at the top of our list.