So, the good news is that the tumor is benign. The bad news is that my right arm will perpetually hang limply by my side like a giant knackwurst. But, I could theoretically still win the Super Bowl.

Some of the above is true.

The pain in my shoulder began last October or November. I think. Maybe it was even before that. The point is, it didn’t start with a specific something (probably stupid) that I did; it just got gradually worse. At some point, the pain became bad enough that I awoke several times every night trying to find a comfortable position. I finally had to admit that my self-healing superpower had finally failed me (curse you, Time!) and made an appointment with a specialist.

Well, I couldn’t get in to see the actual specialist for another month, but I could see his P.A. almost immediately, and since P.A.’s do all the heavy lifting, medically speaking, I did that. She was quite thorough and thoughtful, and I came away with a set of x-rays and a wonderful shot of cortisone (which runs a close second to morphine in my book as far as Good Things That Work Almost Immediately). The diagnosis: Shoulder Impingement Syndrome, which I later learned is just fancy talk for tendonitis, or close enough to be synonymous. (If any medical professionals are reading this, feel free to avert your eyes.)

Ideally, an MRI would have been helpful in nailing down the diagnosis, but my insurance wouldn’t spring for it (if any insurance professionals are reading this, feel free to stab yourself in the eyes). But the diagnosis was non-worrisome, so no harm done.

Then the phone call to my office, a few hours later. The P.A. said something along the lines of “I can’t believe I forgot to mention this but you have a tumor in your shoulder. It’s probably benign, but we should check it out just to be sure.”

The upside was that surely now the insurance company would cover an MRI. And the Easter bunny will leave winning lottery tickets under the pillows of everyone who voted for Obama. Nope; the insurance company insisted that I still needed 3-6 months of physical therapy and THEN they would consider covering the MRI (I suppose they’re betting that I might die before that and then it’s my life insurance company that’s on the hook).

Somehow, the doctor’s office convinced the insurance company that an MRI was a legitimate need, and for that I’m grateful. And so I got to spend an uncomfortable half hour inside a joint of surface casing while extras from The Hobbit banged around with two-pound sledges, whereby was miraculously produced a Polaroid which showed that, by golly, there was a tumor in the arm bone.

The specialist’s office made an appointment for me to consult with him, but they somehow forgot to tell me about it and so it was almost a month after the MRI before I could get an interpretation. In the meantime, while dancing with my wife I began to experience such pain that I couldn’t raise my arm and we had to leave early, which normally occurs only in instances of severe death. The next day, I couldn’t lift a coffee cup with my arm extended, and I began to fear that some scary corner had been turned.

A couple of days later though, the pain had substantially subsided…but a new phenomenon had surfaced. It was like my bicep had slid down toward my elbow. You know how some women complain about the deleterious effects of gravity on their chestal regions? I can relate, after a fashion. Also, flexing that muscle was both painful and unproductive. I felt like it was just on the edge of a perpetual cramp.

I also think I lost the tiniest bit of muscle tone, not enough to notice, probably. Well, see for yourself: 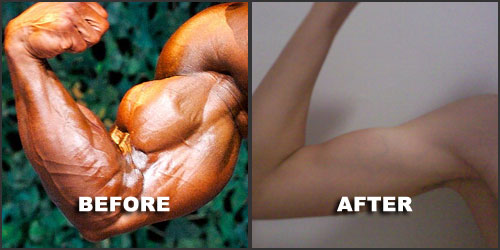 MLB did some online medical research and her definitive diagnosis was a bicep tendon tear. All my symptoms supported that diagnosis, but I wanted to hear it from a real doctor.

Earlier this week, my appointment rolled around. The doctor came into the examining room, pulled up my x-rays and MRI, and began questioning me about my shoulder. I answered all his questions and then told him that there was one new complicating factor.  I pulled up my sleeve, and he instantly confirmed our cyber-diagnosis: I’ve had a complete tear in the long head of the tendon that attaches my bicep to my shoulder. Interestingly enough, because of the mysterious way the human body is put together, the initial pain in my shoulder likely contributed to the tendon tear, but once the tear occurred, it relieved the pain in my shoulder.

“What about the tumor?” you ask. Good question. Turns  out that it’s called an endochondroma, a cartilage tumor that occurs inside a bone. The doctor said I may have had it for years. They’re almost always benign, and rarely cause any symptoms. But in my case, it’s a complicating factor.

A torn biceps tendon can be surgically reattached, with generally good results (i.e. complete recovery of arm strength), but the technique requires drilling into the bone to provide an attachment point. However, since there’s a tumor inside that bone, the doctor was very hesitant to recommend drilling into it and potentially releasing those cells – which are now benign but which apparently have a tendency to get drunk and do stupid things once freed from their bony prison. He said that even without the surgery, I could expect to recover up to 90% of the strength (the short head of the tendon is what allows most of the strength of the bicep, and it’s extremely rare that it will tear), and the biggest downside would be cosmetic…a Popeye-style muscle that, frankly, looks pretty weird. Fortunately, I realized long ago that I had no cause for vanity, so that’s not an issue for me.

Oh, and the Super Bowl thing? The doc pointed out that the year John Elway won the Super Bowl, he had the exact same injury to his throwing arm. While I suspect his medical attendants were a bit more focused than mine, that still provided more reassurance than you might think that this is something I can cope with.

In the end, I’m feeling blessed that it wasn’t something more problematic. More importantly, I get to keep dancing with my wife. It doesn’t get much better than that.