Alert Gazette readers may recall my report on the Great Ice Storm of 2015, in which I chronicled the apparent destruction of the beautiful desert willow in our back yard. That event was heartbreaking, and it even made the cover (with accompanying article) [PDF] of the newsletter for the Texas chapter of the International Society of Arboriculture. That was a dubious recognition, to be sure, and at the time I thought it might be an obituary.

Six months later, though, the outlook is brighter, thanks to a tree’s stubborn persistence (and a little bit of elbow grease on my part). I’m happy to report that we may have the equivalent of a phoenix rising from its ashes in the form of our back yard willow.

Let’s trace the major stops in this journey of rebirth, shall we?

It’s New Year’s Eve 2014 in Midland, Texas, and we’re starting to see a bit of winter in the form of a light coating of ice. We weren’t particularly concerned at this point; the tree was actually kind of pretty. 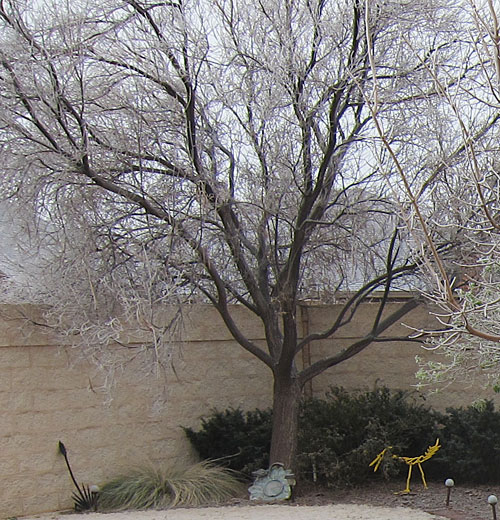 However, disaster struck two days later, when a stronger ice storm followed that initial event. At 9:45 a.m. the tree was starting to show the burden of the accumulating ice. 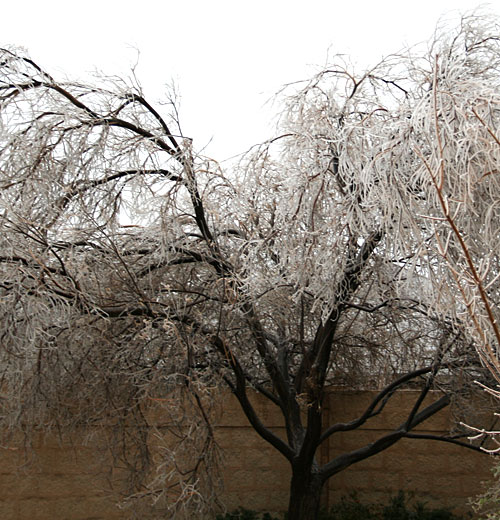 Over the course of the next hour, the thickening layers of ice began to break major limbs on the tree, as you can see in this photo taken at 11:00 a.m. 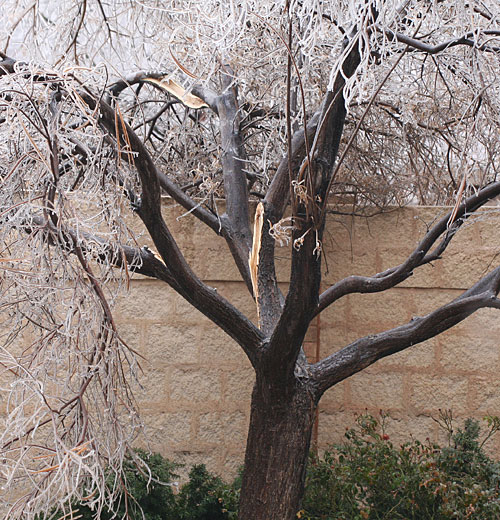 An hour later, the tree was stressed beyond its limits and the trunk split down to below ground level. This picture was taken at 12:30 p.m. 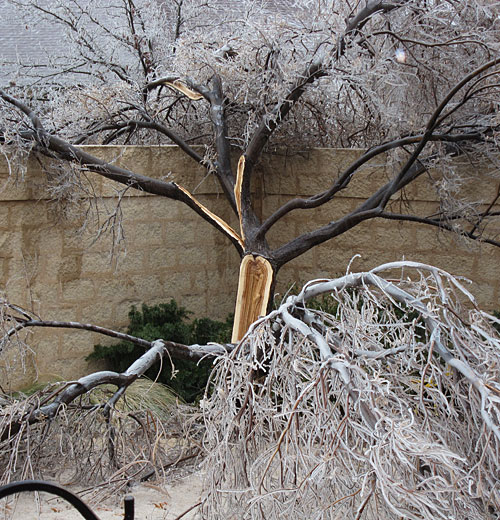 I knew the broken limbs couldn’t be salvaged, so I immediately took them off with a bow saw. Here’s what the tree looked like by 1:00 p.m. that same day. 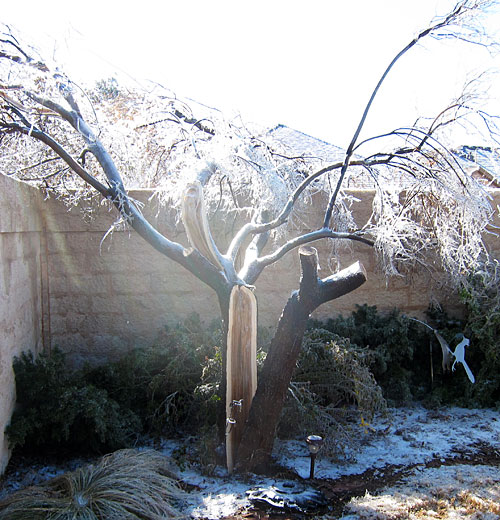 At this point, all I could think about was how we were going to get rid of the carcass, and what might go in its place. It’s worth noting that some have estimated that as many as 40% of the trees in Midland suffered damage from this ice storm, so we were not alone.

However, a couple of weeks later I began to wonder if there was some way to at least make the tree look better, whether we decided to keep it or not. I used a ratcheting tiedown to pull the tree trunk back together (sort of), drilled a hole through both halves, and bolted a threaded metal rod with big washers on each side to hold it in place. (When I grow up, I now want to be an orthopedic surgeon.) I had no illusions that this was a cure, but at least the sight of the tree didn’t make us want to cry. Here’s how it looked on January 16th. 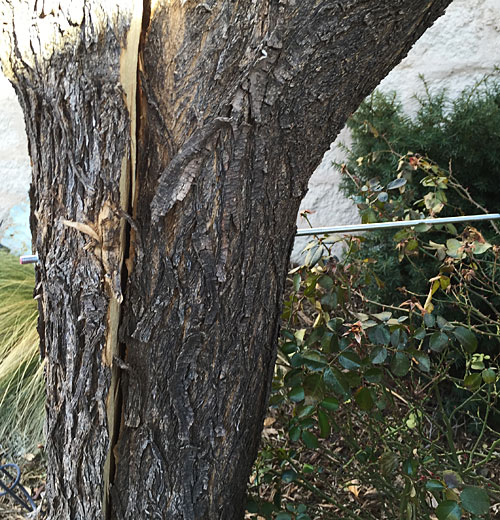 Fast forward a few months. Spring rolls around and in typical desert survival fashion, the tree seems to not realize it’s been mortally wounded, as you can see from this photo from April 29th. 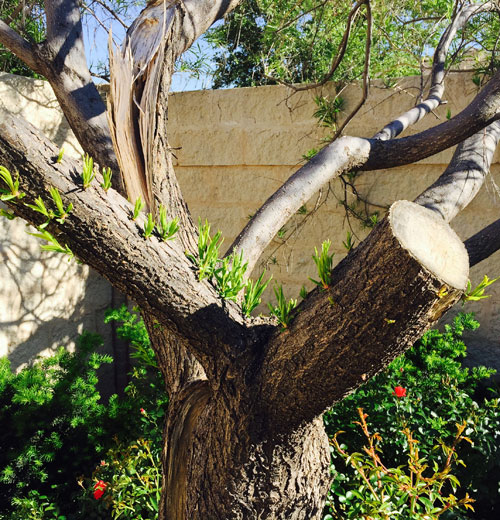 Cute, huh? But, seriously, nothing that hints at something we can work with. However, I’m having trouble working up the energy to do much about it, other than remove some of the remaining limbs that were hanging over the fence into the alley.

May comes around, as it inevitably does, and we get rainfall bordering on record amounts, and the tree gets a growth spurt that would make any adolescent boy proud. By June 5th, the tree begins to vaguely resemble Wilson, the volleyball that kept Tom Hanks company in the movie Castaway. 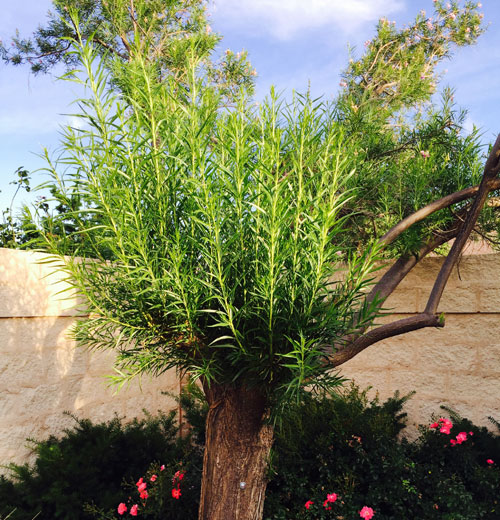 The tree is now putting on new growth so quickly that you can almost see it in real time. In just over two weeks, it looks like a shrub on steroids, as this picture from June 21st illustrates. 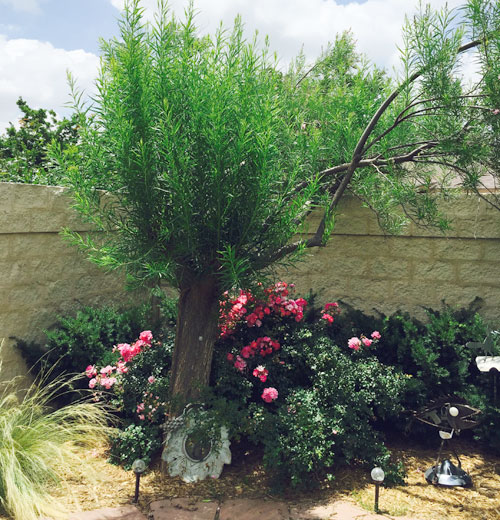 At this point, we decide we should just roll with it and see how things play out. There are still some wayward limbs that don’t fit in with the new aesthetic… 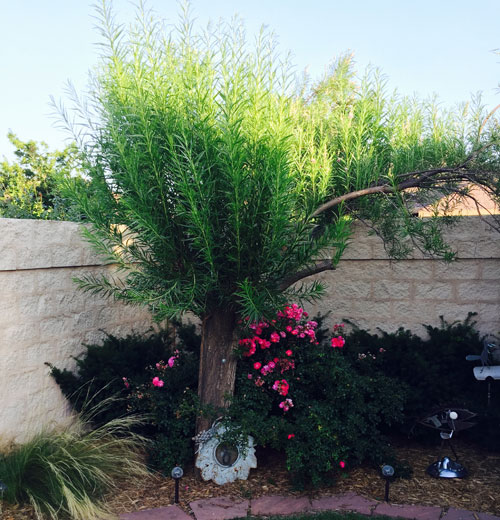 …but the trusty (and only somewhat rusty) bow saw makes short work of them. The result – for now anyway – is the reborn tree shown below that we’ll allow to develop the remainder of this year, and then do some additional shaping in the off-season. The moral of the story? Never give up on Mother Nature. Life is resilient, if given the chance. 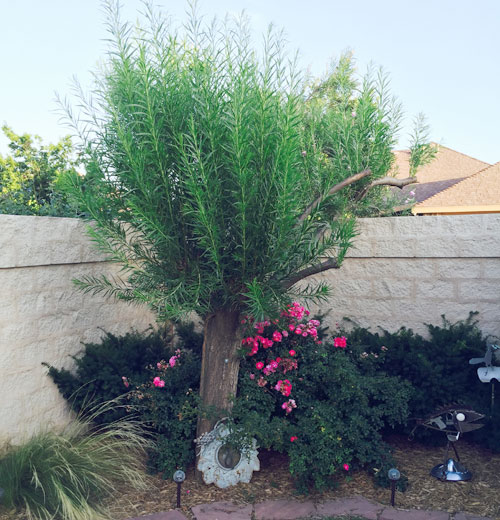 Note: I’m not a professional arborist, and I haven’t consulted one, which might be a mistake. If you have any suggestions based on actual experience to help us mold this tree into a masterpiece, feel free to share them.