Update (2022): I’m leaving this post up purely as a quirky episode in the life of this blog. The app in question no longer exists, nor does the company that created it, having discovered that there’s no business reason to continue to make a product that no one wants. Good thing I don’t operate this blog on such a flimsy premise. 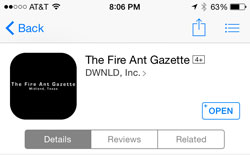 Proving there’s no content too worthless to warrant such treatment, the Fire Ant Gazette now has its own app [link no longer active].

Lest you think I’ve suddenly acquired ambition and skill, let me assure you that I had nothing to do with it. A company called DWNLD specializes in creating turnkey apps from existing websites, and their apparent business model is to do this on an unsolicited basis, and then to notify the content owner of its existence. Why they chose the Gazette for this treatment is a mystery, but “desperation” comes to mind.

Not only did DWNLD (not sure why they chose to yell their name) create the app, but they did the heavy lifting to get it added to Apple’s App Store so that anyone with inadequate media consumption standards can download and install it for free (sorry, Android and Windows users…this is an iOS-only joint).

Regardless of the reason, I confess that it seems pretty cool that this blog has its own mobile app. (OK, to be honest, I find it hilariously ironic that this Content Free™ site should have yet another way of delivery.)

The app isn’t perfect, even apart from its questionable choice of content. For one thing, it’s ad-supported, which is how DWNLD makes its money (I get nothing from those ads). So far, the ads have been non-obtrusive and inoffensive, floating at the bottom of the window, although every now and then, a dismissible full-page ad appears.

Also, the translation from my Movable Type blog layout to the app’s format is quirky. Some odd line breaks appear at random, and it appears not to recognize some rather basic HTML formatting (like unordered lists). It also doesn’t recognize custom style sheets. Navigation through the site is non-intuitive and so far I’ve been unable to determine whether I can make the app display more than a dozen or so articles (which some visitors will feel is a mercy). Based on the sketchy documentation, it appears the conversion is optimized for WordPress sites, so outlier formats get a more cavalier treatment.

Some of the links in the articles that the app picks up lead back to the actual Gazette website, in a fashion similar to the way Facebook opens website links. This tells me that DWNLD hasn’t converted the entire blog, and it’s a bit jarring to jump from the mobile-friendly layout into the not-so-friendly website. On the other hand, that does then allow one to access the complete navigation options for the site.

DWNLD provides a few customization options for app owners via a dashboard which is accessible either via a separate mobile app or via desktop browser. I’m still exploring those options, which appear to be limited to layout selection, fonts, and colors. There’s an option to upload a logo, but I haven’t mastered it because it’s not appearing anywhere in the app. Theoretically, any updates to options are automatically published to the App Store. 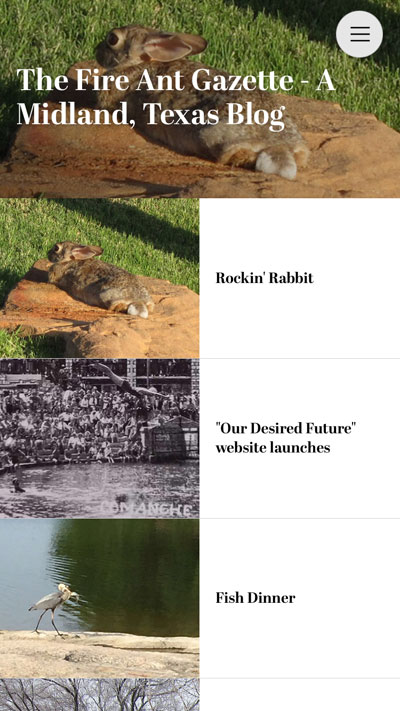 On the plus side, the app does a good job of displaying photos and embedded videos, and it pulls photo captions from the ALT tag, thereby reinforcing the importance of that meta data. It seems to recognize and handle jQuery scripts, such as photo slideshows, although not perfectly. The content itself is displayed in a pleasing manner, and is of course optimized for mobile viewing, something I haven’t taken the time to make the Gazette’s website do. But, really, that’s the whole point of the app: it’s not intended to be a replacement for a desktop-accessible website.

Do I recommend this app? I guess my answer falls into the realm of “sure, why not?” It has some obvious flaws, but also some advantages for mobile device visitors. If I was at all concerned about website traffic, I might worry about cannibalization, but I’m not and I don’t. The app does lose the serendipity of stumbling across content via search engine, and that’s a shame. But the geeky part of me is having a bit of fun figuring out how the whole thing works. And, as I said at the top, it’s kinda cool to have a Fire Ant app. So if this is your cup of tea…feel free to drink deeply! 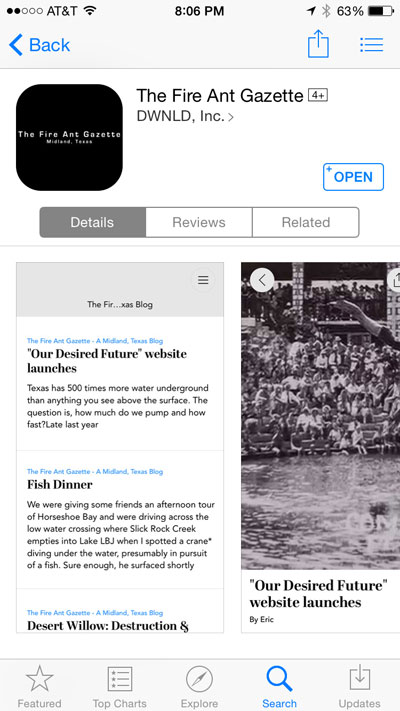