Final Update (2022): I’m leaving this post up purely as a quirky episode in the life of this blog. The app in question no longer exists, nor does the company that created it, having discovered that there’s no business reason to continue to make a product that no one wants. Good thing I don’t operate this blog on such a flimsy premise.

Update (June 9, 2016): I’ve been informed by the developer that unless I provide a credit card and start paying $30 PER MONTH, on July 8th they will delete the app described below. Since the app sucks, I’m happily letting it expire. Sometimes even a free app isn’t worth the money.

Update (July 27, 2015): The following post details some issues with the new app that caused me to withdraw my recommendation for its use. I brought those to the developer’s attention a few days ago, and just received a reply. They say they are working on some of the styling issues and investigating why one article is not displaying in its entirety. More important, they have turned off the feature that caused external links to appear as links to my own articles, which I felt was misleading and inappropriate. Given this response, I withdraw my withdrawal of my recommendation. Or something. Does that make sense?

A couple of days ago, I gave a halfhearted recommendation to a new Fire Ant Gazette iOS app. I was willing to live with the weaknesses of the app – primarily the poor translation of the formatting of the blog – in exchange for the admittedly selfish and subjective “cool factor.”

However, having lived with the app a while longer, I’ve uncovered a couple of additional issues that have caused me to change my mind.

The first problem is the app’s inexplicable tendency to leave out entire sentences. This was demonstrated in rather ironic fashion when the first sentence of the post linked above was omitted from the app version. This is ironic because that sentence contained the link to the app download page.

The second issue is more egregious, because it tries to pass off promotional material from the app developer, DWNLD, as something I’ve posted. Take a look at this screenshot from the app: 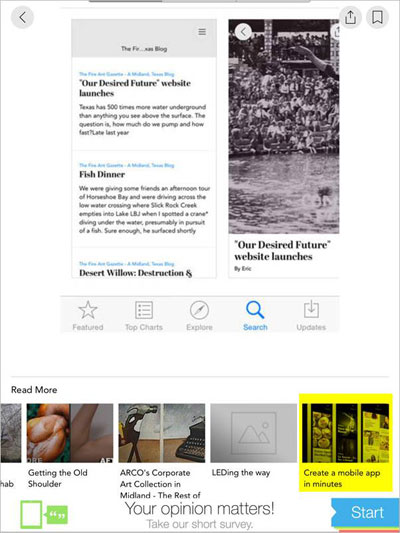 The highlighted icon is an ad link.

The portion highlighted in yellow is actually a link to DWNLD’s website, but it’s formatted and placed in the “Read More” section where everything else is a link to additional Gazette articles. I think this is misleading and I don’t appreciate the implication that I’m somehow endorsing or recommending DWNLD’s services.

I initially thought that this is a marketing ploy for DWNLD, but I now realize that almost every post has a similar link (or links) in the “Read More” section which lead to external, third party websites linked in the specific article. Again, this is misleading, as it appears that they are links to more Gazette articles. It’s also superfluous, because I already provided embedded links in the article; there’s no need to randomly recreate them in the “Read More” section.

In effect, DWNLD is coopting my content, and deciding what to emphasize. I don’t appreciate the editorial intervention.

I emailed DWNLD with my concerns about both of these issues, but have not received a response. Where that leaves things is that, for now anyway, I no longer recommend downloading this app. And if I can’t get either an acceptable explanation or solution, I’m going to request that the app be removed from the App Store.

I have enough trouble managing the Gazette writer without also having to manage a third party “editor.”