Skip to content
We arrived at the church just before 9:00 on Saturday morning, and were issued hair nets and disposable plastic aprons. We were then seated in a row of folding metal chairs, waiting to be ushered into…well, we weren’t sure. This was our first time to volunteer for a Numana “food assembly” project.
We’d never heard of Numana before we joined Fannin Terrace Baptist Church (FTBC). Numana is a non-profit hunger relief organization formed in 2008. During its relatively short lifetime, 180,000 volunteers have packaged more than 32 million meals which have then been distributed to hungry people in thirteen countries. On this Saturday, FTBC was about to add 200 volunteers and 60,000 meals to those numbers. 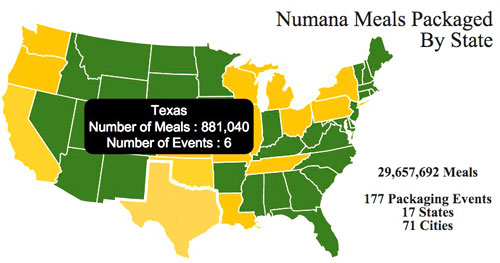 We added to this number on Saturday
The meals are simple, but nutritious. From Numana’s website:
Our meals consist of rice, soy protein, freeze-dried pinto beans and a blend of vitamins and minerals targeted to help the immune system of malnourished people.  These ingredients are measured into bags, weighed, sealed, boxed, and prepared for shipment at our events.

The cost of each life-sustaining meal is only 30 cents.  This includes all of the ingredients, packaging, administration, and international shipping of the container.

After a short wait, we were ushered into the church activities building where the supplies and equipment for the food packaging were laid out. We were put in teams of ten, given a two-minute orientation, and the meal assembly began.
Numana provides an amazingly organized framework for its projects. Henry Ford would be proud of the assembly line approach employed to package the meals. The tasks are broken into manageable pieces that allow people of all ages and abilities to participate, and each team quickly becomes a well-oiled machine because of the clearly-defined and simple roles each member plays. Here’s how ours worked, as an example:
Other volunteers circulated continuously throughout the building making sure that each of us had plenty of supplies. Someone kept count and kids rang a big gong each time another 10,000 meals were loaded.
I mentioned that all ages can be involved in the assembly. At our table, the #2 and #3 roles were filled by great-grandparents; Debbie and I filled #4 and #1 respectively. A couple of pre-teen girls did the weighing, spelled by an octogenarian. And over the course of 2 1/2 hours, our team assembled more than thirty boxes, or the equivalent of 4,500 meals (each bag feeds four people).
I’d be lying if I said it wasn’t mind-numbing and, eventually, uncomfortable work. We stopped only to remove jackets and sweaters, or to refill our bins, and the repetition of each task made each of us grateful that we never had to work on true assembly lines to make a living. It’s difficult to imagine doing something like that eight-to-twelve hours a day, six or seven days a week. Toward the end of our “shift” we were doing silly things like pouring ingredients into the funnel before the bag was ready, or missing the funnel completely.
But we worked until we ran out of the meal components that Numana had provided, and our fatigue was greatly tempered by the understanding that we were helping to make a difference in someone’s life. Despite the tired feet, and aching wrists, arms, and shoulders, everyone I visited with the next day said they’d be doing it again next year.
And so will I.