My tenure as a boy scout was pretty short (even counting the preposterous time I spent as a Sea Scout in landlocked Fort Stockton), but the “be prepared” mindset stuck with me. I’m blessed/cursed with an imagination that places me in the most disastrous alternatives of any given scenario, and the fact that one of those alternatives hasn’t yet occurred only means that the time of its arrival is closer than ever.

Granted, some of this is paranoia, but it’s also common sense. Take jumper cables, for example. I’ve put a set in both of our cars, because you never know when you might encounter a dead battery (either yours or someone else’s). Of course, the problem with jumper cables is that you need another car in order for them to be effective. This is not a problem if you’re stranded in a populated area and you don’t mind calling on the mercies of kindhearted (you hope) strangers, but you don’t always get to choose where your car battery gives out. 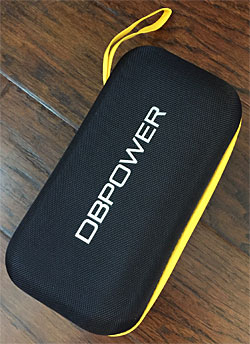 The unit comes in a nice zippered carrying case.

The simple solution is to also carry a portable power source, one strong enough to start a car. Fortunately, advances in battery technology have given us that capability in a small, easy-to-use package…like the DBPOWER 600 amp jump starter, which I purchased after reading a review on this site. (Note: At the time of this writing, the unit is on sale for Prime members for half price at Amazon.com; just click on the preceding link.)

The lithium-ion battery that powers the device is strong enough to start a 6.5 liter gas or a 5.2 liter diesel engine. No, that won’t start your Bugatti Veyron‘s V16 mill, but it will handle the largest engine you can get on a Ford F-150. That is impressive for a device that weights just over a pound and fits comfortably in the palm of my hand.

The DBPOWER 600 also serves as a power source or charger for home electronics, including USB-powered devices, and it has a plethora of adapters – none of which are Apple-compatible, by the way – for that purpose. It has a built-in flashlight (because batteries never die during the day) with strobe and SOS modes. And, inexplicably, it has an integrated compass…for which even my overactive imagination has thus far failed to identify a valid use.

OTOH, the compass does imply other non-car-related uses. While the carrying case is somewhat bulky, the unit itself would easily fit into a backpack for a hike or camping trip, and provide plenty of power to recharge a camera, tablet, or phone. 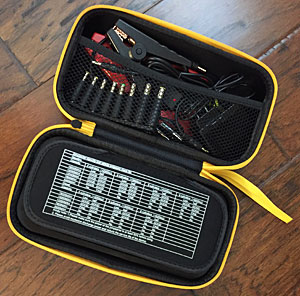 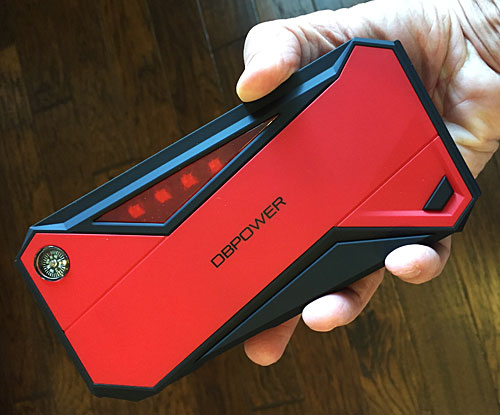 The unit itself is compact and easy to handle.

The manufacturer claims that the battery needs recharging only every four months, assuming that it hasn’t been used. That’s a fairly impressive standby time. It also purports to be able to jump start 30 cars before requiring a recharge. However, I’m of the opinion that if you’re jumping 30 cars at a time, you’re either incredibly helpful, or you’re engaged in activities of questionable legality. Alternatively, if you’re jump-starting your own car 30 times in succession, just go buy a dang battery, OK?

The device can be recharged either via your car’s 12-volt DC outlet or a 120-volt AC plug. It does, of course, come with adapters for both.

The controls are clearly labeled and easy to use.

All of this is theoretical, of course, so I decided to put it to the test on my own vehicle, a Honda Ridgeline pickup with a 3.5 liter 6-cylinder engine. Not having a dead battery (there’s never a mechanical malfunction around when you need one), I disconnected the battery leads, sacrificing my clock and radio settings for your edification. I figured this would be a true test of the device, because even when a battery doesn’t have enough power to start an engine, it may still be providing some residual current that’s additive to whatever the jump starter is providing. (I’m not a mechanic or an electrician, so I could be wrong about that.)

In any event, I powered up the jump starter, attached its clamps to the battery cables, and – voila! – the truck started immediately. I turned off the engine, disconnected the device, and then repeated the process. Again, the engine fired up without hesitation. And after two starts, the power level on the jump starter dropped from 99% to 98%. The 30-start-per-charge claim may actually be conservative based on this admittedly limited test.

By the way, if you’ve been intimidated in the past by jumper cables – knowing which to clamp to what – this device is drop-dead simple to use. You can only connect the clamps to the device one way…the correct way. Then, the red clamp goes on the positive battery terminal; the black goes on the negative. If you get them switched, the unit has circuitry to keep it from damaging your car’s electronics, and that’s A Very Good Thing. 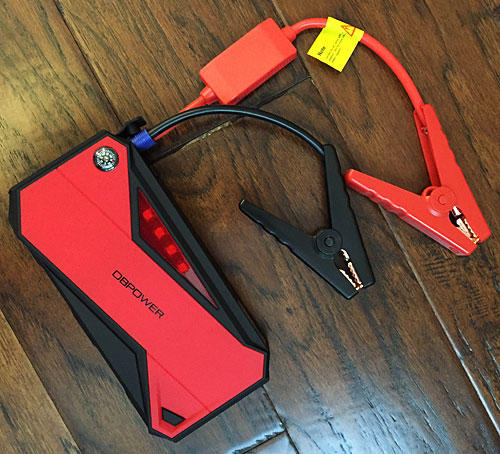 You can bet it will be a constant companion in my truck because, you know, you can never be too prepared. And, by the way, this would be a perfect gift for a student heading off to college for the first time.

Now, if I could only remember the code that’s required to access and restore my navigation and audio system settings…