Update [9/23/20]: Thanks to a reader’s comment on this post, I’ve been able to add a new chapter to the ARCO artwork saga. This time, it’s focused on corporate art from ARCO’s presence in the Chicago area. Read about it here.

Alert Gazette readers may recall that last year I wrote about ARCO’s corporate artwork collection in Midland, and my role in helping dispose of it after BP gutted us acquired the Company. That post served the dual purposes of documenting an interesting period in my career and also providing an enduring (to the extent that anything on the web endures) glimpse at the art via the rudimentary website I built to showcase it.

A couple of months after posting the article, I received an email from someone in Los Angeles who had stumbled across it, and discovered that she’d purchased a copy of one of the works in the collection. Small world, huh?

I’ve been blogging a long time, and I’m no longer surprised at that sort of serendipitous encounter; Mr. Google has a way of working magic like that. At least, I thought I was immune to surprise. But, I received an email a week or so ago, and I have a new appreciation for the power of the web. Here’s how it started:

Wow, just found your fascinating Blog (The Fire Ant Gazette) and had to contact you. I worked directly for Herbert Bayer and Curator Leila Mehle in the Los Angeles office (then Arco Plaza) in downtown LA back in the late 70’s.

So it was with great interest that I found and read your Blog and toured your Virtual Gallery! Bravo for creating this!

The composer of that email is David Halver, and that link that I put on his name will lead you to his IMDb profile. Go ahead and hop over and read about Mr. Halver; I’ll wait right here.

David’s email went into a great deal of detail about his work with ARCO’s art collection, including some great anecdotes about the acclaimed Bauhaus artist Bayer and ARCO’s legendary founder and chairman, R.O. (Bob) Anderson, and he has followed up with several additional missives. David was kind enough to grant me permission to share his letters, and I want to do that mainly to add some color and context the documentation of a piece of American corporate history that probably isn’t well known.

Rather than copying and pasting David’s email in its entirety, I’m taking the liberty of excerpting it and adding my own observations where possible. However, these excerpts are unedited.

I had the pleasure of meeting and working with [Herbert] Bayer on numerous occasions in Los Angeles as well as at his home outside Santa Barbara. It was Bayer’s close friendship with CEO Anderson that got “Bob” interested in collecting; and as Bayer told it, Bob would often go on shopping sprees…hitting contemporary galleries in nearly every city he had business in; buying on impulse anything that he liked (with a then unheard of Platinum American Express card) and had them shipped to his ranch in Roswell, or his homes in NYC or LA or the huge penthouse suites overlooking the marina in Marina Del Rey, CA.

As he soon tired of seeing them, he quickly replaced them and they all ended up in the offices in LA.  In the meantime, he had commissioned Hebert to select “important” pieces that were hung in the executive’s offices, conference rooms, lobbies and waiting rooms. You mentioned 15,000 pieces…by the time Arco acquired Anaconda and built the Anaconda Tower (near the Brown Palace in Denver) it was closer to 30,000…thus the donation by the Bayer Estate to the Denver Art Museum.

On the cataloging system used for the collection…

David was able to shed some light on the numbering system employed to keep track of the artwork.

In the process of working and trying to document the quickly growing collection, Mehle and I developed an inventory system of assigning an ID code (on a small aluminum tag) to the frames or pedestals of all artworks in LA offices; where part of the code ID’d the Artist, a “letter” code indicated the medium, and then a group of numbers indicated which specific piece; thus B001 was Bayer, SG stood for serigraph, and as he had several 100s in the collection, there were four (4) spaces for an ID number after that. As I recall, a code similar to L004.PT.0003 would be for a Lichtenstein original Painting and the third one in the collection. These ID numbers were included in the slide library for reference.

Notice the casual reference to Lichtenstein. Original paintings by the pop artist sell for more than $40,000 nowadays. The Midland office wasn’t fortunate enough to land a Lichtenstein.

I wasn’t alone in my efforts to document the collection via photographs.

I too had the honor to photograph the collection and built a massive slide library housed in the 515 offices (the North Tower). As the collection grew, and I had previous Art Gallery experience (installing and packing) in LA, I became the chief “installer” for the newly acquired pieces that were sent to Denver for the Anaconda Collection.

In subsequent emails, David expressed an intent to locate the slides and digitize them. I hope he’s successful in doing so. 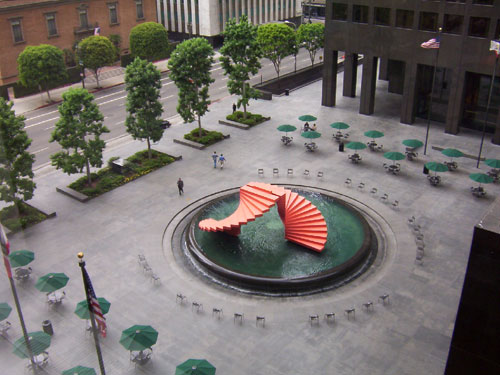 Herbert Bayer’s Double Ascension.
According to David, “Bob [Anderson] loved the original title, Stairway to Nowhere, but he thought the Board of Directors wouldn’t approve!)

One evening I was changing a framed print in one of the “hidden” xerox work stations (also used as the secretary’s lunch area) behind one of the many extraordinarily crafted wood paneled walls…and a gentleman came in to use one of the many xerox machines. While it poured out dozens of collated copies, he asked me if I could help him get rid of that “awful painting” in his office.

He led me to his office and his polished chrome “name-plate” by the side of his door (the walls were covered with a dark beige wool) ID’d him as the VP of Arco’s Chemical Division. The previous curator (prior to Mehle) had hung a rather dated and not very appealing framed print above the couch and chairs that his desk faced, and a small abstract watercolor over the built-in credenza behind his desk…not at all fitting for a man in his position.

He asked about getting a Currier & Ives print or something that related to the outdoors “…anything would be better than that horrendous thing!”

As I had hand-carried the new print for the xerox room and was taking the old print by hand, I couldn’t do anything about it at the moment, but promised him that I’d speak with the Curator the next day. The next night I was installing t
he pieces she had selected and he walked in (it was late as I recall, well after 9PM) and at first he got pissed… “What the hell is that? This is worse! What is that supposed to be?”

It was an extraordinary abstract multi-layered oil painting that had an extraordinary glaze covering it that gave it a brilliant glow. I had been prepared by Mehle in the event that this would happen. “The Curator thought that as you are the head of the Chemical Division that you might enjoy this. It’s called “Cold Fusion of Diverse Elements”; the Artist was inspired by photographs taken by an electron microscope.”

He stared at it for a while, then noticed an extraordinary B&W Ansel Adams surrounded by a wide cold white matte and framed in an elegant thin welded chrome frame over the credenza. “Now that…I like. But this other one, well, I’ll have to think it over. Thanks.”

Less than a week later, he sent a Thank You note to Mehle and months later, while I was doing something on the 50th floor, his door was open and I heard him telling someone… “The artist was inspired seeing a chemical reaction in a microscope. I love it!” I had to keep from laughing out loud.

A very similar thing happened with an extraordinary painting (actually, four side-by-side canvases) called “Into Plutonian Depths” … I did a Google image search and all that comes up is that it was the title of a pulp fiction sci-fi novel back in 1950… sadly no images of the painting. Anyway, the images were extraordinary and lined up side by side (each was around 40″ square) it was like looking out the portholes of a space ship at an Alien Landscape. It was on the same executive floor where the VPs of geology had their offices… and was immediately disliked. But once the Curator had a small plaque installed with the title and a brief explanation that it was in fact supposed to be “…the view from the bridge of a Mining Vessel that had just landed on another world to do geological exploration..” Needless to say, it was a big hit.

His accounts ring true, in my experience. The artwork didn’t always elicit positive responses from employees, and the closer to oilpatch you got, the less openminded people were about some of the more avant garde or impressionistic works. (And lest you think I’m immune, I never did understand this one. Or this one.) But if you are able to explain the context or make the piece relevant to something in the viewer’s experience, you’re more likely to get acceptance, if not outright enthusiasm.

David has shared a great deal more about life in general around ARCO’s Los Angeles offices, including how the buildings were featured in the 2005 movie, Fun With Dick and Jane, for which he served as location liaison. I’m most appreciative of his willingness to take the time to record his experiences with my longtime employer’s art collection, and for his kind permission to share those experiences with you. And if he’s successful in locating that slide collection, I’ll do my best to talk him into sharing a few of the more important works.

The original version of this post incorrectly referred to an office covered with “a dark beige wood,” when in actuality the walls were covered in wool. On behalf of hard-working sheep everywhere, I apologize for this misstatement.

The original version of this post implied that ARCO had original Roy Lichtenstein paintings in its collection, when in fact it had “only” hand-signed/hand-pulled lithographs and serigraphs. I regret ARCO’s cheapness.