Have you ever found yourself in a situation where, if the details were only slightly different, the outcome would border on disastrous? Perhaps you drove through an intersection and when you looked in your rearview mirror, you saw a car run a red light and t-bone another vehicle. Or perhaps it was something as simple as coming back into the house from the garage before a weekend trip because you forgot your car keys, and finding that you’d left the cooktop on.

I’ve experienced these “happy coincidences” on a number of occasions through the years. For example, after a 20 mile ride through the Texas Hill Country, our bike chain inexplicably* fell apart…two blocks from the B&B where we stayed. Then there was the time our bicycle’s rear wheel self-destructed while we were plodding along on a flat road at about ten mph, making it an annoyance; the weekend before we had barreled down a hill at three times that speed, and if it had happened then, it had the potential to be fatal. And I’m sure that many of us have the shared experience of finding that our car battery has died in the garage, rather than in the middle of nowhere.

I wouldn’t try to argue with those who would claim that these things are simply the luck of the draw, although my belief is that there is some Divine intervention at work. Because sometimes, those “coincidences” are just too unlikely to have any other explanation. We experienced that earlier today.

I took my truck to the dealership on Friday for regular scheduled service, a part of which involved rotating the tires. I picked it up Friday afternoon, and drove it around town on various errands for at least fifty miles through noon today. I didn’t notice anything out of the ordinary during that time.

As we returned home after lunch today, I turned down the alley leading to our garage, and noticed a shiny object lying in the middle of the alley, one house down from ours. I pointed it out to MLB, who hadn’t noticed it, and she retrieved it after we parked. She brought it to me, and remarked that she thought it was part of a tool. It looked really familiar…I identified it as something similar to the security lug nuts on each wheel of the truck. In my post chile-relleno-and-enchilada stupor, I decided that perhaps it had rolled out the alley from the garage of the neighbors behind us, and I decided to return it to them. 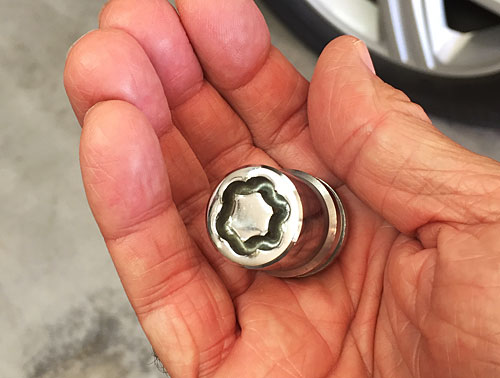 As I walked past the truck on the way out of the garage, my mind suddenly clicked…this didn’t just look like one of the security nuts…this was identical to them. Oh, surely not. I walked around the truck and when I came to the rear wheel on the passenger’s side, my suspicion was confirmed. This was my lug nut. 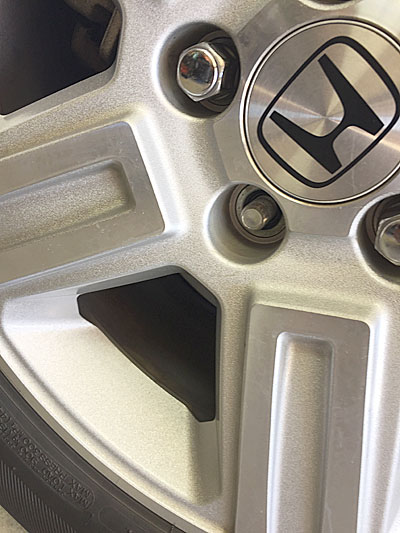 The mechanic at the dealership had obviously neglected to tighten the nut sufficiently on Friday and it eventually worked its way off the wheel**. But the “coincidences” are fairly obvious, aren’t they?

I immediately remounted the lug nut, and checked all the others for tightness. The other three security nuts were very slightly loose – I could budge them perhaps 1/32nd of a turn with the wrench – while the non-security nuts were all perfectly torqued down (obviously down with an air wrench).

So, as it turned out, this situation resulted simply in a blog post (if you think that’s a disaster in and of itself, well, keep that to yourself), rather than something much more serious. Feel free to consider this a happy coincidence and us as incredibly lucky. Personally, I’m casting my vote for an overworked guardian angel dispatched by a loving God.

*Inexplicable, except for the fact that I later found I had mounted the chain incorrectly. Go me.

**I have some experience with insufficiently tightened lug nuts. That’s another story for another day; suffice it to say that seeing one of your car’s wheels roll down the road ahead of you isn’t something you easily forget.