The first rule of Fight Club is: you do not talk about Fight Club.
–Fight Club, in apparent violation of its own rule

Unlike with Fight Club (and very much like CrossFit fanatics/Vegan dieters/Gluten-free adherents) the first rule of bow tie wearers is: You talk about it.

I’ve learned the truth of this only lately. MLB gave me several bow ties for Christmas (see below), and every time I wear one, it becomes a topic of conversation with other men who also like to wear them. It’s like a bond; you might say it’s the tie that binds (if you were really desperate for a metaphor).

I’m embarrassed by how long it took me to tie these three. I blame the knit shirt.

Among bow tie wearers, the topics inevitably include (in order of typical progression):

That last item seems to be particularly relevant, given the struggles to master the arcane art that most of us seem to have experienced in the beginning. But we shall speak no further of that.

The conversation will then evolve (or devolve, depending on whether you’re a non-bow-tie-er trapped on the periphery) into a detailed discussion of techniques, tips, favorite ties, and amusing anecdotes (again, the degree of amusement will vary considerably amongst members of the group).

I’ve also found that each of us has particular eccentricities when it comes to our bow tying. My friend Sam, for example, must stand in front of a mirror while tying his, which isn’t particularly unusual. The eccentric part is that he can’t actually look in the mirror during the process. I have no idea how that works.

I, on the other hand, cannot don a bow tie without looking in the mirror, even though the mirror image makes my brain hurt. I used this video to master the technique, and it’s the equivalent of looking in a mirror (the instructor is African American, nattily dressed, goateed, and quite skilled…but other than that, we could be identical twins), but it too made my brain hurt.

If the conversation does include those who don’t wear bow ties, they tend to fall into one of two camps: (1) men who are skeptical of everything related to bow ties, and (b) women who are intrigued by them. (Note to guys who are thinking “chick magnet”: This should not imply that they will be smitten by the wearer; women are just impressed by items of clothing that are challenging to put on.)

Regardless of the occasion, the dexterity with which the deed was done, or the conversational drift, any guy with a bow tie will tell you that at the end of the night, this is what makes it all worthwhile: 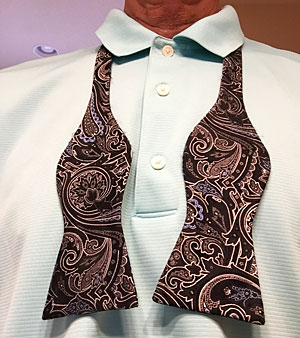 No, I won’t talk about my bow tie; I’ll let it do the talking, and it says “yeah, boi, he tied it himself!”