Travel back in time with me, if you will, to the year 1996, and contemplate the state of technology two decades ago.

In 1996, just 20 million American adults had access to the Internet, about as many as subscribe to satellite radio today. The dot-com boom had already begun on Wall Street–Netscape went public in 1995–but what’s striking about the old Web is how unsure everyone seemed to be about what the new medium was for.
…
In 1996, Americans with Internet access spent fewer than 30 minutes a month surfing the Web…

Less than 10% of the U.S. population had internet access  but some of us were already trying to answer the implied question: how do you use it?

One rather obvious answer was to figure out who the likely audience might be, and then try to identify uses that might appeal to that audience. (Those folks would be known today as early adopters, a term that was actually coined in 1962 but which wasn’t in widespread usage in 1996.) And, of course, the predictable answer for who likely fell into that demographic was college students.

And so some of us who were involved in on-campus college recruiting for our employer, ARCO Permian, had the brilliant idea of creating a website that would (1) explain what our company was and what it had to offer, via articulate and persuasive propaganda commentary, while (b) demonstrating our remarkable technical savvy and overall coolness.

The only flaw in the plan was that 10% number mentioned above. Even if college students had more ready access to the internet, a web-based approach would exclude a significant majority of them. The solution was simple: a WOAD, which was our acronym for “Website On A Disk.” Impressive, right? OK, I just made that up, but it IS a cool acronym, with a kind of Celtic warrior vibe*.

Sadly, we elected to go with the more pedestrian “Portable Web Site” and it looked like this: 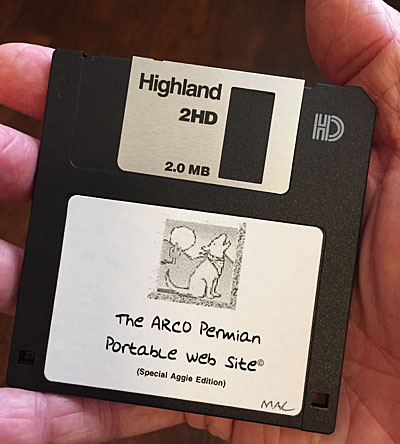 You remember floppy disks, with their two megabyte capacities (in HD format, that is) and magnephobia (no, it’s not on the quasi-official phobia list, but it should be) tendencies. A floppy seemed to be the ideal medium for handing out to students who may or may not have had an internet connection.

Given the capacity limitations, the trick was to design a website that would fit on a disk. No problem, the actual site consisted of only four pages, and it totaled less than 250kb. And for some unknown reason, we had a link to a text-only version that consumed a massive 12kb.

We also created a unique splash page tailored to each university we were recruiting from. Cutting edge stuff, I tell you. And, finally, we included a read_me.txt file on each disk providing detailed instructions on how, exactly, to open the website via browser (along with assurances that we had scanned the diskette “for viruses using Norton © Anti-Virus For Windows©, V. 3.0; even then I was a Mac user, but I resisted the urge to add that Apple folks needn’t worry about such things).

I don’t know if we ever actually hired anyone because of this tactic; I don’t even recall getting any feedback about it. But it was a fun project to work on, and was one of the first of many, many websites I enjoyed building for years thereafter. 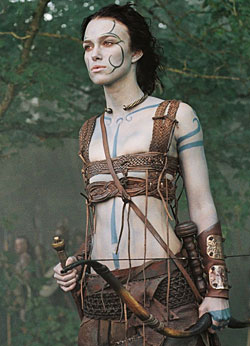 *In the 2004 movie King Arthur, the fierce tribe of Picts was referred to as “Woads,” presumably because they made themselves look fierce by painting themselves with dye from the woad plant, and also because “Picts” sounds less than fierce. Some people with apparently nothing better to do dispute that as an historical misconception.

Personally, I prefer to remember the movie for Winona Rider’s Kiera Knightley’s (oops!) Woad-ish costume, which would have easily won an Oscar for The Most Obviously Uncomfortable Costuming by a Major Actor or Actress in a Leading, Non-Musical Role (and I really do hope the Academy is considering the addition of such an award).