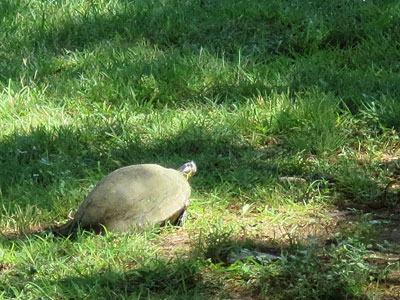 MLB and I were walking to the mailbox this morning when we spotted a big turtle in the shade of a tree about 25 feet from the street (and about that same distance from the creek that I presume is its home).

It wasn’t moving, which was odd, so we walked over to investigate. It withdrew partway into its shell, but made no attempt to get back to the water.

We’re not turtle experts, but the way the back half of the turtle was positioned in a shallow muddy depression seemed to indicate some nesting behavior. 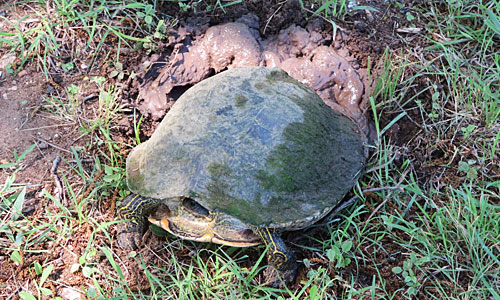 We watched it for a couple of minutes, and not observing anything of apparent consequence, we continued our stroll to the mailbox and then back home.
After about an hour, we decided to check on la tortuga — which we tentatively identified as a red-eared slider —  to see if we could make any more sense out of its behavior. I took a video camera just in case there was anything worth recording, and we were rewarded with this:
In case you’re wondering, I did indeed feel a [admittedly illogical] twinge of privacy-violating guilt in videoing at such close quarters.
If you watched carefully, you saw two eggs being deposited into the muddy hole that passes for a turtle nest. According to the Wikipedia article linked above, this species will lay 2-30 eggs at one time (which is quite a span). The eggs take between two and four months to hatch, and the youngsters will not enter the water until almost three weeks after hatching. That would seem to be when they are most vulnerable to predators.
We debated putting up some kind of cage around the nest to prevent any disturbance but ultimately decided to let nature take its course. We’re not lacking for turtles in the creek, and I’m not really interested in monitoring a nest until next fall to make sure that any hatchlings can get out of whatever cage we might build to keep predators from getting in.
In addition, when we returned for one last check, the turtle was gone and so was the “nest.” Well, not gone gone, but good luck figuring out where it is. That mama turtle is a camouflage master. 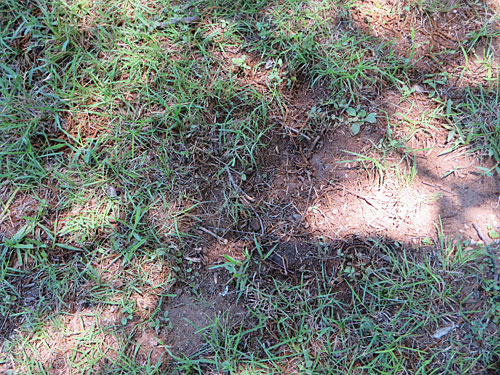 Can you spot the nest?
As I’ve often observed on these pages, the world of nature never ceases to astonish and amaze.