Alert Gazette readers will recall our encounter with a cottonmouth (aka water moccasin) last fall. Then, a couple of months ago we discovered a four-foot-long blotched water snake in our courtyard. The latter encounter taught me that distinguishing between the poisonous cottonmouth and the non-venomous water snake wasn’t as easy as I had initially assumed.

If you google “cottonmouth vs water snake,” you’ll see that I’m not the only one who needs some help with this subject. There are many articles and videos that attempt to teach you how to correctly distinguish these species, something that could literally be a life-and-death skill. Unfortunately, in the real world, snakes don’t carry ID cards, and making an absolute identification is hit or miss.

Case in point: a few days ago MLB and I were walking on the trail that encircles our neighborhood, and which roughly parallels Pecan Creek for about half its length. Something in the creek caught my eye and I scurried over to investigate. I’ll save you a few thousand words, and substitute the following video instead.

According to “the experts,” there are several factors to consider when trying to decide if the snake you’re confronting will deliver a potentially fatal bite or just a very painful one (yeah, they pretty much all bite). But I think there are drawbacks to each of those factors.

So, while I lean toward identifying “our” snake as a cottonmouth, I wouldn’t bet the farm on it. In any event, we’re stepping more cautiously when we’re out in the yard, even though the likelihood of one coming that far from the creek is pretty small. I’d hate for either of us to make a positive identification of a cottonmouth in the worst possible fashion. 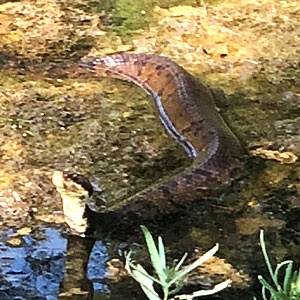