The golf cart/pedestrian path next to the low water crossing over Slick Rock Creek, just south of Highway 2147, hasn’t had water running over it since the October floods. Still, much of it stays wet thanks to the splashes from cars driving through the creek. Over time, if those puddles don’t dry out, moss and algae begin to form on the concrete.

I have an Apple Watch Series 4 (apparently we’re not supposed to use “Series 4” as an adjective), and it has a couple of health-related features that are potentially useful.

Well, one of them has been immediately useful. Ever since my little heart-related episode, I’ve occasionally used the ECG and irregular heartbeat notification feature of the watch if I feel anything out of the ordinary in my heartbeat. Fortunately, nothing has been amiss, according to the watch, so I’m obviously a hypochondriac.

We rode our tandem bike across that path a week ago, and felt the front wheel skid slightly — just for an instant — as we went through a puddle in which a mass of leaves had accumulated. But we made it across without any further incident, and I made a mental note to avoid that puddle if it was still there the next time. 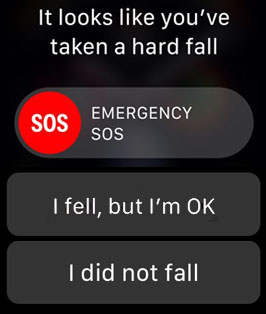 The second feature has been less helpful. The fall detection capability built into the Series 4 is designed to, well, detect when the wearer has suffered a fall. This feature is automatically turned on if the wearer is 65 years or older (the watch owner is asked to input age when the watch is initially activated). This is a commonsense approach, since older folks are more apt to (1) fall and (2) suffer injury from such a mishap. The detection feature can be manually disabled, but I’ve elected not to do that, for reasons that aren’t germane at this point.

However, what I’ve experienced is that this feature is prone to false positives — detecting what it thinks is a fall when in fact nothing of the sort has happened. I now take my watch off before using the leaf blower, because it will invariably confuse the vibration with whatever movement its algorithm uses to identify a fall. When that happens, the watch vibrates and displays the screen shown above. Also, on one occasion I got the same message while vacuuming the floors in our house (see, housework is dangerous!).

This behavior is annoying, but it is potentially serious. If you don’t tap on one of the options shown above within sixty seconds, Apple automatically calls 9-1-1. Again, this is a commonsense and valuable action…provided that you’ve actually fallen and need assistance. But it could be very embarrassing if you’re using a leaf blower (or vacuum cleaner, or hammer, etc.) and don’t feel the vibration that signals activation of the fall detection process.

Last weekend, we got about an inch of badly-needed rainfall. Things had dried up nicely by Tuesday, when we headed out on the bike for a midday ride. We were riding the same route as the previous week, and we discussed what we would do when we got to that low water crossing. The plan was to simply avoid the collection of leaves, assuming it hadn’t been washed away by the rain.

It was still in place, so I steered around it and we continued pedaling across the concrete walkway. A couple of seconds later, we were lying on our sides, still astride the now horizontal bicycle. As it turned out, the entire length of the passage was now slick with moss or mud.

I was still clicked into the pedals and it took me a while to get extricated so we could stand up and assess whatever damage we and the bike had taken. But I immediately felt the familiar vibration on my left wrist. We quickly determined that we were not significantly injured, and so — for the first time — I was able to click the “I fell, but I’m OK” option.

Fortunately, emergency responders are not prone to judge harshly such lapses in technology, assuming they aren’t associated with repeat offenders. This article deals mostly with false positives from the ECG feature of the watch, but the attitude toward the fall detection feature is similar: it’s better to show up when you’re not needed than to not find out you’re needed until it’s too late.

We didn’t come away completely unscathed. MLB lost a rather large patch of skin on her palm, and I twisted my knee and wrist and had some minor abrasions on the back of my hand. (No, we don’t wear gloves when we ride. That would have prevented the hand injuries.) The bike wasn’t damaged, but my handlebars were knocked out of alignment a bit. All in all, it could have been much worse.

Well, actually, it was worse, as the whole mishap was witnessed by a elderly Latina walking a tiny dog. She had paused to let us go over the walkway ahead of her so she had a closeup view of the fiasco. I’m sure she was shaking her head about the crazy gringos and their weird bicycle. The dog just looked bored.