That was fun! I had forgotten how enjoyable it is to write about a variety of topics, thereby demonstrating that my shallow and uninformed opinions run not only deep but also extremely wide. So, let’s do it again, shall we, as the topics of the day are compelling.

Before we get started on the subjects you really came here for, let’s talk about Myles Garrett. By now, almost everyone has seen or heard about what he did last night during the Cleveland Browns/Pittsburg Steelers football game. Here’s a visual reminder:

Is this assault and battery…or justifiable retaliation?

Count me as one of the many who are faulting Garrett for something that appears to be an egregious act of violence. But there are some counterarguments regarding what happened on the field just prior to this that might – might – lend some understanding, if not exoneration, to Garrett’s actions. It will be interesting to see what a full investigation reveals (and I’m sure the NFL wants to do exactly that, considering that this involves one of the most gifted athletes in the league).

I’m a big fan of TV ads, mainly because they’re usually more interesting than the shows they interrupt. The ad for Liberty Mutual Insurance featuring the tongue-tied actor cracks me up, as does the “Stay in your lane, bro…” only-OK tattoo artist pitching AT&T’s…something.

Most local ads, however, fall short in terms of both production and entertainment value. I suspect it’s because they don’t have the budgetary luxury of being subtle and hoping you can figure out what they’re peddling or why you should give them money. But there’s one local company that seems to recognize the value of creative ads, and that’s Austin-based Radiant Plumbing and Air Conditioning. If you’re not in the Austin TV market, you’re missing out on the following gem:

Seriously, isn’t this an example of what we wish all local TV ads could be? The ad is just cheesy enough to let you know it’s all in good fun, but the production values are first rate. It’s an ad worth watching multiple times just to pick up on all the details you might miss the first time.

Alert Gazette readers will recall my promise not to write a 50,000 word novel during this year’s National Novel Writing Month or NaNoWriMo (which, as of today’s date, would mean there are 25,000 words that have escaped a fate worse than death at the fingers of my keyboard…aaaaannnd that’s the worst word picture I’ve painted in a long time, and that’s saying something), thereby extending my streak to twenty years of not doing this.

However, I am toying with the idea of possibly pretending to participate in NaNoGenMo, because it’s more my speed cup of tea jam style (?). The National Novel Generation Month has a similar premise to NaNoWriMo except that instead of dedicating valuable synapse circuitry to stringing 50,000 words together, you get a machine to do it for you.

This is a great idea; it’s about time machines started pulling their weight. Although I’m pretty sure there are some authors who grokked to this approach years ago (I’m looking at you, Little Stevie King).

The chief challenge of letting a machine write your stuff for you is finding just the write right device to suit your style. In my case, I’m thinking that a Craftsman gasoline-powered leaf blower would do the trick.

Me: What are you watching?

Say, did you see the story about the cows who were found on an island four miles from where they were supposed to be? It appears that they were caught up by Hurricane Dorian back in September and somehow ended up on an island on North Carolina’s Outer Bank.

According to the headline, the cows swam to their new grazing grounds, even though – as the writer puts it – swimming that far is “outside their general range of expertise.” I tend to agree with this assessment, given my own extensive bovine expertise, having seen a number of cows alongside the road over the years. I think the more likely explanation is also more intriguing. 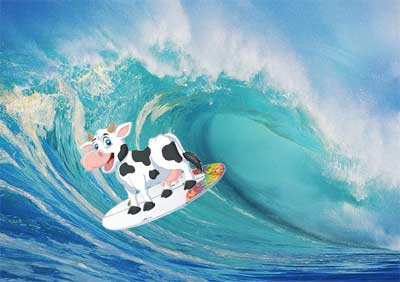 In closing (I’ll bet you thought we’d never get here), we had one of those cold, crisp, clear mornings that make our eastern exposure a joy to view. The combination of bright sunshine, 32º temperature, and 93% humidity created a peaceful scene that I never tire of seeing. Hope your day is just as peaceful. 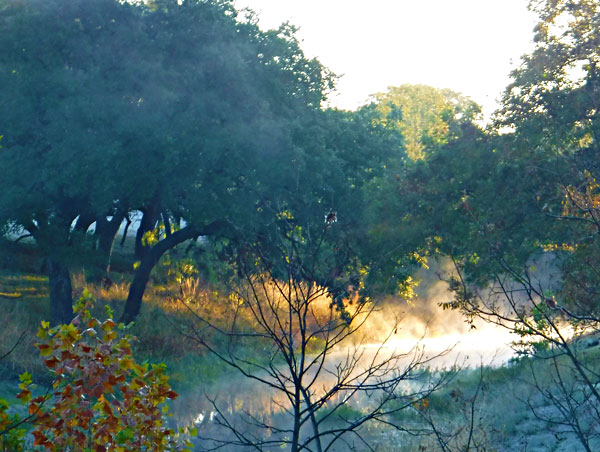