I was on our deck before breakfast yesterday and noticed an anole on the railing. This is not an unusual occurrence; we’re practically overrun with them. But there was something different about this one. I got closer and immediately recognized what was going on: the lizard was in the process of molting, and had pieces of shed skin clinging to its head.

All reptiles go through a similar process as they grow. Snakes shed their entire skins at one time. Turtles and alligators shed their plates and scales, respectively, one at a time. Lizards molt their skin a section or piece at a time.

They’re a little lethargic when they’re molting and I was able to get within a few inches of this one before it tired of my company and jumped off the deck into the liriope below. I thought no more about it (other than regretting that I didn’t have a camera with me) and went inside for breakfast.

Later, about midway through breakfast, something on the deck caught my eye. I couldn’t tell for sure, but it looked like a lizard was eating something. This time, I did have my phone handy. 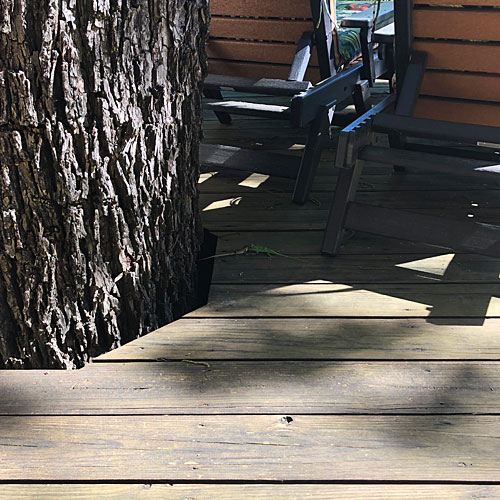 It was hard to make out exactly what was going on from a distance.

I got a little closer, and the situation was clarified. Two anoles — one brown and one green — were fighting, and one had gained a definite advantage. 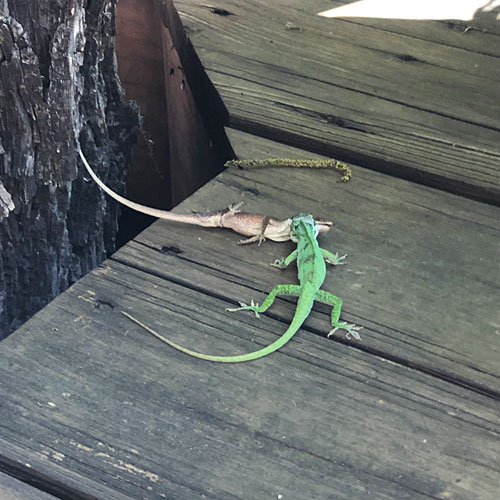 The green anole had the brown one gripped by the throat.

Green or Carolina anoles (Anolis carolinensis) and brown or Bahaman anoles (Anolis sagrei) are separate species. The former is native to the US; the latter is not, but has gained a fairly wide foothold in the States over the years. And, apparently, they don’t get along well with each other. But, it’s not really a racial thing…male anoles are quite territorial and they will aggressively defend their domain against every perceived interloper. In this case, El Verde apparently got the jump on El Café. 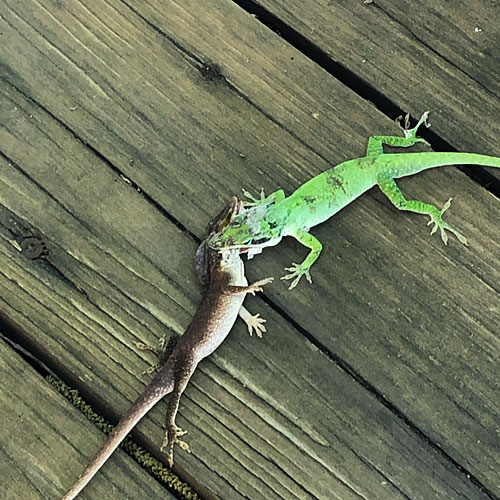 The green one looked familiar.

Since anoles can change color, one might wonder if these are both of the same species. The greenies can turn a shade of brown, but the brown ones never turn green…only different shades of brown. I also suspect (it’s just a guess, however) that during stressful times like this, their “natural” colors persist. Whether that’s true or not, if you look closely at the back of the neck of the brown one, you’ll see the dorsal flap which is an indication that this is indeed a different species from the green one.

From this vantage point, I could see that El Café was still breathing, albeit very slowly. El Verde acknowledged my presence by dragging his adversary a few inches, but he was loathe to release him. 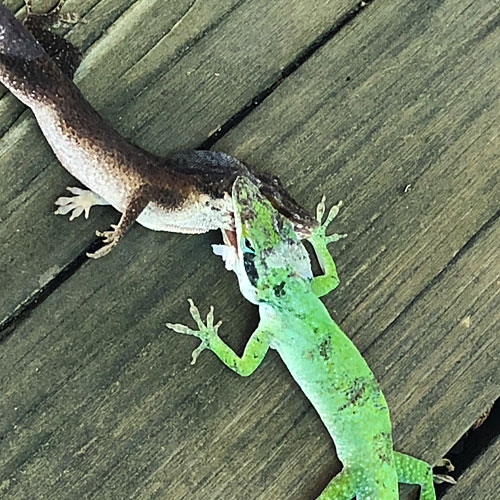 El Verde was molting…note the loose skin patches on his head.

The green anole was the same one I saw earlier on the deck railing. His territoriality trumped his lethargy as he assertively defended his borders (one wonders how they might be laid out).

Now, I have no great issues with the life-and-death realities of nature, but I kinda like the idea of having two competing species hanging around the premises. Since the brown one was still alive, I took matters into my own index finger and gently flicked the tail of El Verde. He relaxed his Jaws of Death, and to my surprise, both lizards sprang away, in opposite directions of course. El Café showed no apparent residual deleterious effects, living, I suppose, to fight another day.

I imagine them smack-talking to each other across the deck, perhaps in voices reminiscent of Inigo Montoya: until we meet again, mi amigo, enjoy your life, as it will be shorter than you wish.