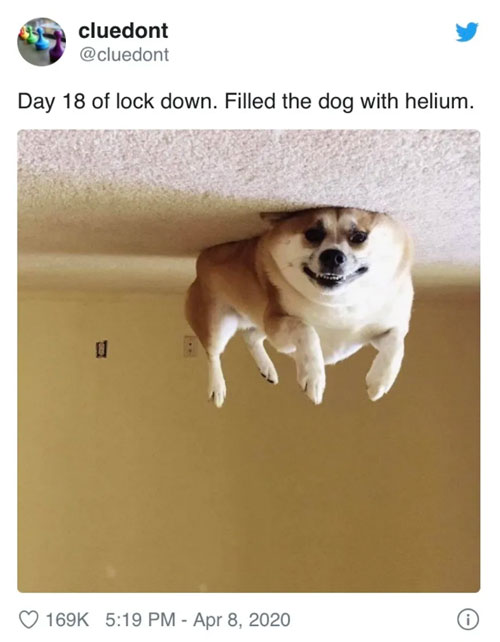 I was going to do a long post about how I’m pretty sure I had COVID-19 in the first week of February, as I suffered many of the symptoms that the CDC are now putting forth, but tested negative for both strains of the flu, but I figured that would be boring and possibly inaccurate. But I see that I’ve done it anyway. Sorry.

But I’m pretty sure I had it. See also: ihadititis

So, I’m in the midst of a couple of fancy DIY projects, where being in the midst of is a euphemism for I’m try to figure out what I’ve done wrong and how to fix it. (Alert Gazette readers will be surprised not in the least at this situation.)

First is a bicycle-related challenge. A couple of weeks ago, Debbie and I were riding our recumbent tandem through the lovely, wildflower-filled landscape of Horseshoe Bay when to our mortified surprise, we lost most of our braking power on the steepest section of downhill on the route.

This is NEVER A GOOD THING, but especially where a sharp turn at the bottom of the hill is at play. Fortunately, we were able to scrape off enough speed through a combination of what little braking power the bike still had plus my emulation of that well-known prehistoric vehicular stopping technique you’re no doubt familiar with [insert “braking bad” joke here] to make the corner and eventually return home safely, albeit with elevated heart rates.

After we got home, I determined that we were the victim of a combination of cable stretch (To learn more than you ever wanted about this phenomenon, click here. Or just trust me when I say it’s a real thing.) and pad wear on the bike’s disk brakes. I normally don’t work on life-and-death componentry like handgun safeties, hospital ventilators, and bicycle brakes, but our local bike shop (which isn’t all that local, being 30 miles away but I like their work) is temporarily shut down because of you-know-what. If we want to ride safely in the foreseeable future, I’ll have to fix this myself.

I ordered a fourth-hand tool — it’s formally called a cable stretcher but that sounds boring — and tightened the cables. That fixed the back brake, but the front one is still not grabbing like it should, and I think the solution is to replace the pads. According to the “experts” on YouTube, this is a piece of cake that any third grader could do with one hand full of gummy worms, but, wouldn’t you know it, we’ve run completely out of third graders. So, it’s up to me (and YouTube). I ordered a set of pads today, and by this time next week, I’ll either report that our brakes are working well, or I’ve had to order new ultra-grip shoe soles.

The next project has no mortal implications, unless you consider television viewing a necessity for life like air, water, and Chex Mix. I’m attempting to repair a 4K LED TV.

It’s a 50″ Vizio flat screen that we inherited from Debbie’s dad. It’s been in the credenza in our bedroom where it primarily broadcasts the morning and evening news. It’s not as though we’re running low on TVs here at Casa Fire Ant; we’ve had as many as eight (including the back patio and garage). But Debbie did some research and found that Vizio televisions are actually pretty easy to service. There are four main circuit boards with inscrutable scary names that control the main functions of the device: the Power Supply, the Main Board, the LED Driver, and the T-CON board. Each of these are readily available for purchase via multiple online sources, and they’re not all that expensive (certainly collectively much less than the $900 original purchase price for the TV).

Of course, there’s a catch. There always is. In this case, you have to diagnose the problem to know how to fix it. Unfortunately (for me), this requires a bit of expertise and — let’s just say it — luck, because some symptoms could arise from problems with more than one of the aforementioned circuit boards. So, we took a chance and picked the most likely board: the power supply, because the set wasn’t turning on. Debbie put in an order for one and when it arrived yesterday, I endeavored to install it.

It’s a fairly straightforward procedure, theoretically, in the sense that a brain transplant is a simple matter of cutting open the skull, removing the brain, and dropping a new one in.

The skull opening was the hard part. There are precisely 27 screws of varying sizes attaching the back of the TV to the frame. I managed to remove 26 of them without drama, and then I stripped the head of the 27th. Now, I have special tools for extracting screws with stripped heads — you’re not surprised, are you? — but they’re designed for much larger fasteners than the 1/16″ wide screw head I was dealing with. I won’t bore you with the details, but it took significantly more time (and tools, and vocabulary) to remove that last screw than the preceding twenty-six. But I was finally able to expose the mysterious inner workings.

The yellow borders show the circuit boards that can be replaced. Theoretically. And, no, I can’t tell you what any of them do. Sufficiently advanced technology ≈ magic and all that. 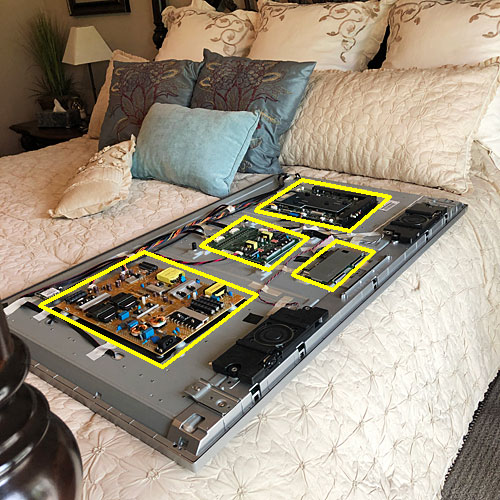 The biggest board shown in the photo is the power supply and it actually was very easy to replace. I did that and [carefully…very carefully] reattached the back cover of the TV. Did I mention there are 27 screws, one of which has been brutalized? I plugged the power cord into the wall, waited for it to reboot (what? you didn’t know your TV could reboot?) and — voila! —

My reaction was mild. This was no surprise; this was par for the course; this is my lot in life. I did eventually remove the back cover again (oh…here’s a shock…I managed to strip another screw head in the process, so at least the first disfigured member has a friend now) just to make sure I didn’t miss a connection. I didn’t. That would have been too easy.

At this point, I would normally give up, realizing I’m out of my depth, which is measured in millimeters at best. But after pricing the additional boards, I realized that there was still a chance of repairing it for a fraction of what a new one would cost, so I ordered the three remaining components. I’ll let you know how that works out, as if we don’t already know *wink, wink, sigh*.

In closing, you’re sure to appreciate the sheer artistry of the following image, which is a frame from a 28-minute video I made of the inside of my pocket during our walk this morning. I’m saving the actual video for the 96th days of lock down, when it’s sure to compete favorably with anything on TV…especially if your TV is a busted 50″ Vizio. 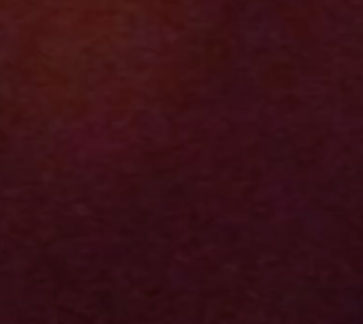