Alert Gazette readers will remember how I teased them with this preview of potential Independence Day bicycle decorations in preparation for our participation in the local (Horseshoe Bay) parade. The final modest result pictured below belies the hour or so of toil in the sauna-like confines of a garage in the middle of a Texas summer. It also doesn’t capture the copious amounts of gaffer tape and nylon cable ties employed to ensure that decorations stayed comfortably (and safely) away from such operating mechanisms as brakes, chains, shifters, and wheels.

OTOH, it DOES show that we were appropriately patriotic (or, if you prefer, garish and gaudy), and ready to parade. 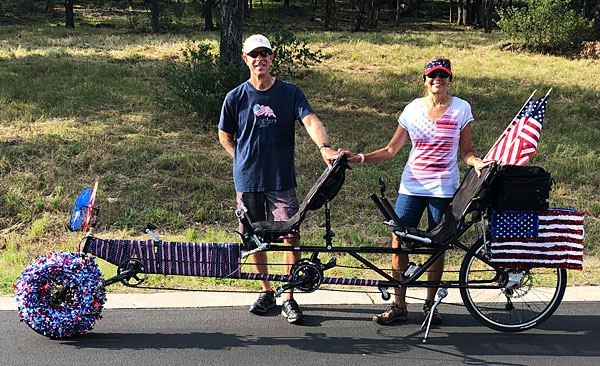 Photo courtesy of the very personable golf cart driver who had
the misfortune of following us in the parade.

This was our second year to ride in the HSB parade, and it was a lot of fun.  This year we were blessed with cool and cloudy conditions, unlike the Great Heatstroke Tour of 2018. The route is short — less than 1 1/2 miles — and lined with people of all ages from start to finish (plus a leashed pig wearing an Uncle Sam hat). There are scores of decorated golf carts, cars and truck both old and new, and the obligatory appearances of city dignitaries riding in convertibles and fire trucks. And, of course, one weird recumbent tandem bicycle.

With all due immodesty, I confess that our bike gets some of the most animated reactions from onlookers, and especially the kids. The procession moves slowly enough to allow some interaction with the spectators, and it’s a blast to hear the comments. And one media photographer was apparently impressed. 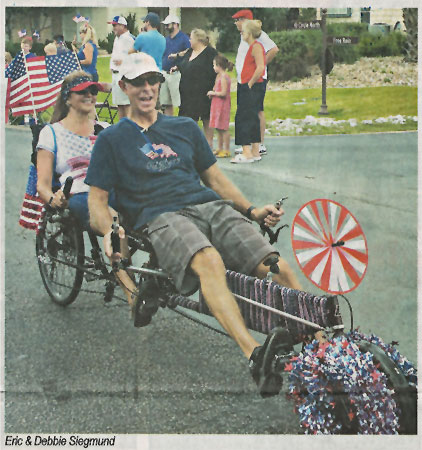 They even spelled our names correctly.

This photo appeared in the July 11 edition of the weekly Horseshoe Bay Beacon, and ours was the only non-dignitary-transporting vehicle that made the paper. Granted, we appeared on page 9 (of a 12-page edition), but at least we were above the fold.

Disclaimer: I know, I know. Helmets. We do normally wear them. But our average speed in the parade was about 2 mph, and I doubt that we ever exceeded 4 mph, so give us a break this one time, how ’bout? Of course, at those speeds there is a distinct challenge of staying upright, so perhaps we were pushing the boundary. But that’s how we roll. [Heh]

I had originally intended to use our new celebrity status as a soapbox to address some bicycle/motor vehicle interaction etiquette issues, but I think I’ll save that for another day. The main takeaway would simply be: please don’t run over us, even when we’re not so obviously patriotic. Thanks very much!

Oh, yeah; I almost forgot. Thanks to the post-holiday sale at Hobby Lobby, next year’s decorating scheme will be even more awesome. Stay tuned.