This is the second in a possibly endless series of posts about the fascinating details of nature in our figurative Texas Hill Country back yard. Part 1 is here.

I hope your weather has been as nice as ours over the past few days. Cool mornings and warm afternoons mean that we get to spend a lot of time outdoors, and there’s been a lot of interesting flora and fauna to observe (and photograph). With your permission, here’s what we’ve observed.

The turtles that inhabit the creek behind our house are a skittish lot, and tend to dive out of sight at the slightest provocation. So it was a rare pleasure to stand at the back fence and watch this one. This is about as mellow as you’ll ever see a turtle get (I’m pretty sure it wasn’t dead). 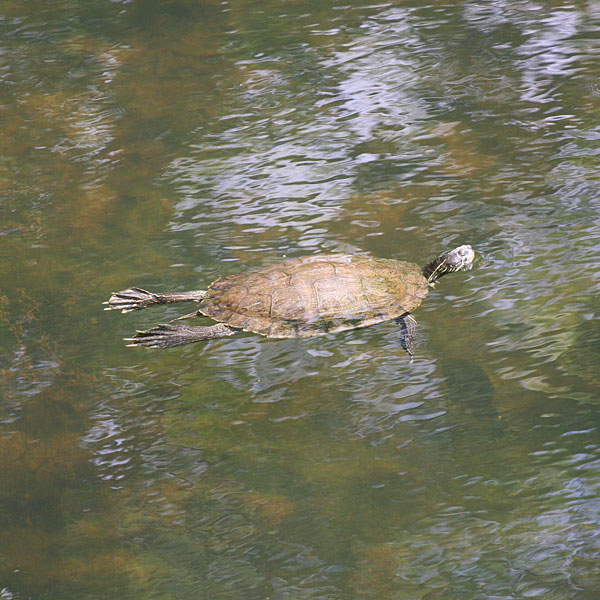 Find someone who loves you like this turtle loves floating in a creek.

The stream that runs behind our house is called Pecan Creek, and a couple hundred yards downstream from our place another, smaller creek joins it. I don’t know if it has an official name but on Google Maps it’s called Dry Branch. Anyway, it runs through a golf course fairway on its way to Pecan Creek, and a small dam creates a small pond on either side of a bridge. Debbie and I run and walk across this bridge on a regular basis and we’ve been monitoring the activities of a family of Egyptian geese that have taken up residence in these ponds.

When we first noticed them, there was a pair of adults, and two downy goslings sticking close to mom. The next time we passed by, several days later, we were saddened to see only one baby…and the third time, only the adults were out and about. We assumed the worst. But, last Friday we walked across the bridge and were delighted to see that one of the goslings had survived and was growing rapidly. I’m unsure of the goose family dynamic once the progeny mature. For all I know, they go away for a while and they returned to live in their parents’ basement and play video games. But it’s cool to see them hanging out now. 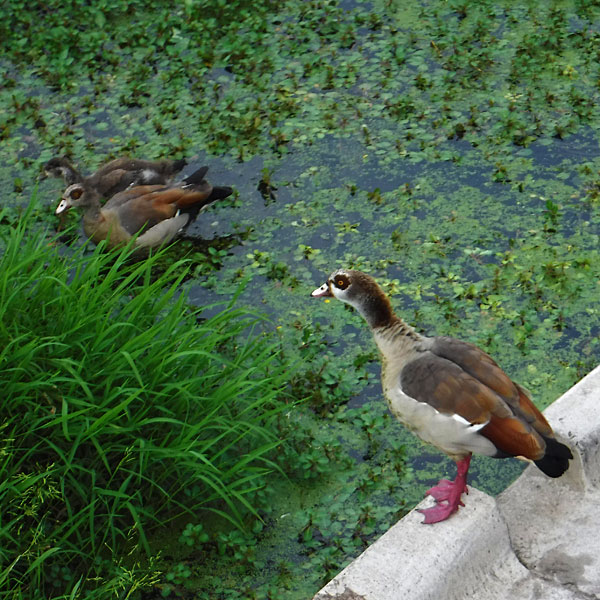 Speaking of birds — and downy hatchlings and nestlings in particular — remember the hawks nesting in the tree next to our house? The wind finally died down enough for me to launch my little drone in an attempt to check on the nest.

Now, you need to understand a few things about this process. While I control most of the flight functions via a set of joysticks on a controller connected wirelessly to the drone, I monitor the video/photo stream via my iPhone. The small size of the phone screen plus the fact that I’m usually flying in bright sunlight means that I can’t really make out the details of what the drone is videoing or photographing. So, my technique is to shoot everything everywhere and hope that I get something worth looking at. Sometimes, I get lucky. 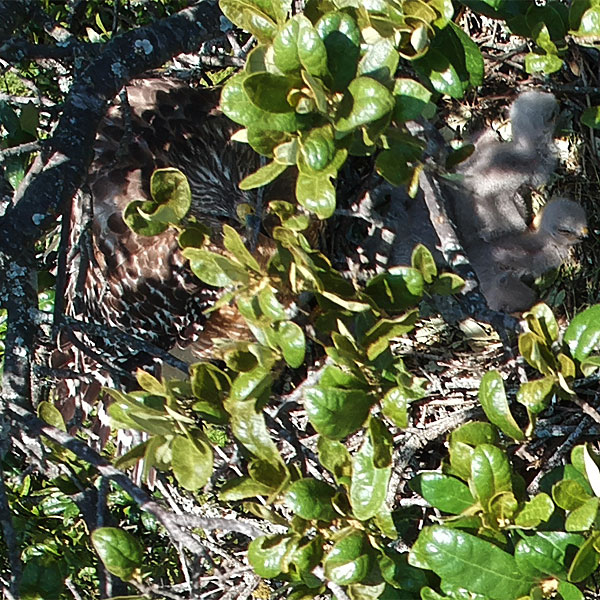 The female hawk is at the upper left, mostly obscured by the tree’s foliage. 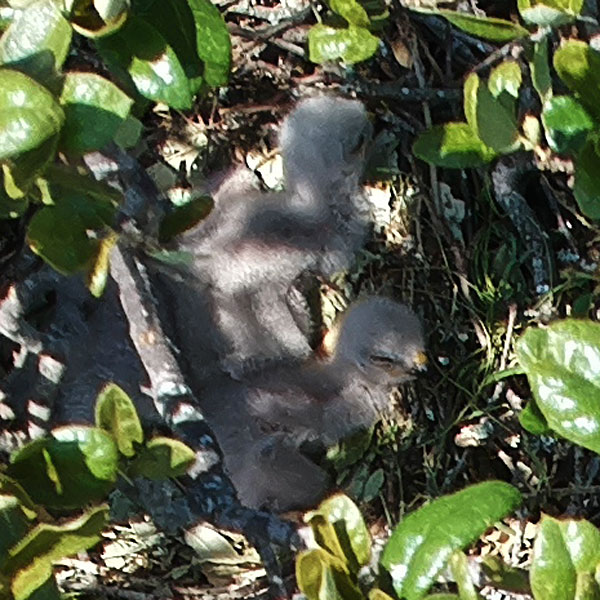 Here’s a closer look at the nestlings.

I’m no expert, but the baby hawks surely can’t be more than a few days old.

Let’s shift gears from the avian world to the domain of the reptiles. It’s not such a great leap if you believe the scientists in Jurassic Park: birds evolved from dinosaurs, and lizards are nothing but tiny dinos.

I’ve often featured anoles on these pages, so there’s nothing really new to report. I just liked these close-up photos. The first one you see is a male Carolina anole, and if you’ll drag the yellow line to the left, you’ll see a female of the same species (the zig-zag pattern on the back is the tell). 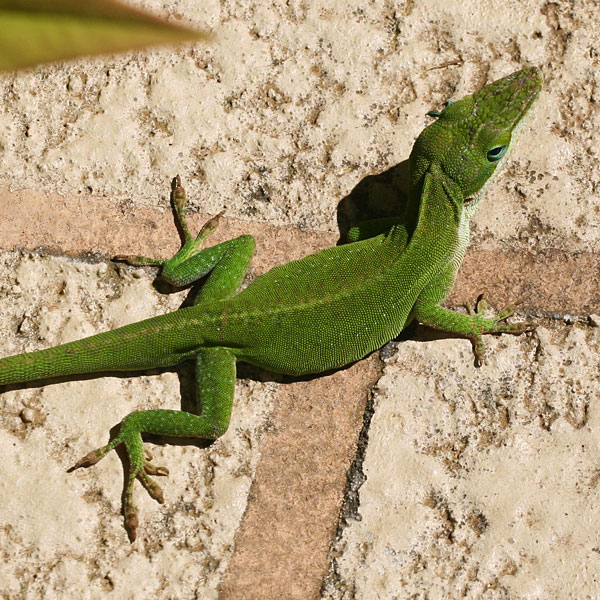 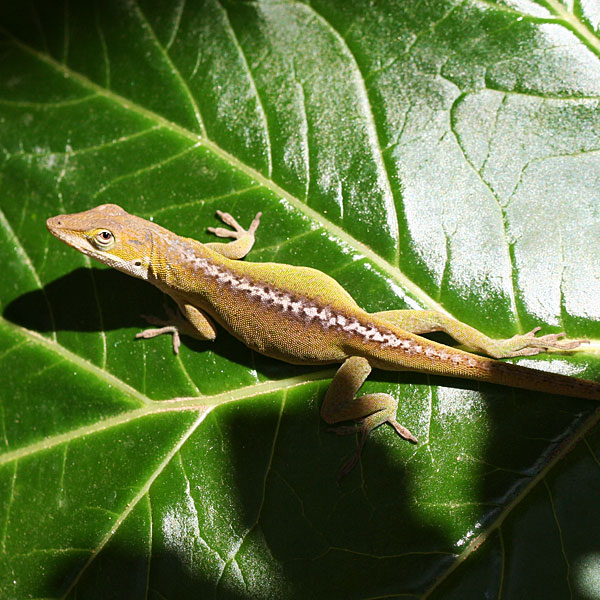 The female lizard was on an acanthus leaf in our courtyard. I later looked out the window and noticed that she had something in her mouth. 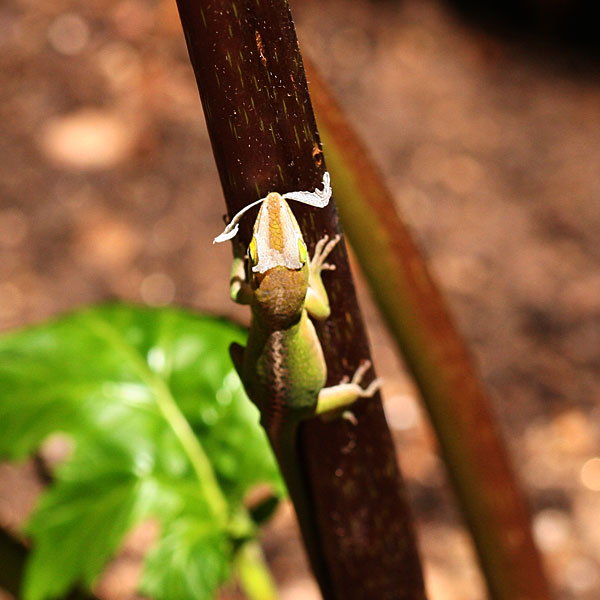 What the heck is she holding in her mouth? Wait…what? Eww…

Alert Gazette readers will recall that I recently wrote about the anole’s molting process. What I didn’t report on is the tendency of the lizards to eat their own shed skin, which is apparently nutritious, in a gross reptilian fashion. If you look closely at the preceding photo, you can see that she is molting the skin on her head (face?), and the piece she has in her mouth could be the skin that circled her eyes. I’m just guessing here, and she didn’t actually end up eating whatever it is, but it makes an interesting, if somewhat unsettling, possibility.

In closing, and as long as we’re in the reptile kingdom, here’s a photo of a Texas spiny lizard that was sunning itself on our deck. The coloration on this one is a little unusual, as they normally have very distinct dark bands down their back. 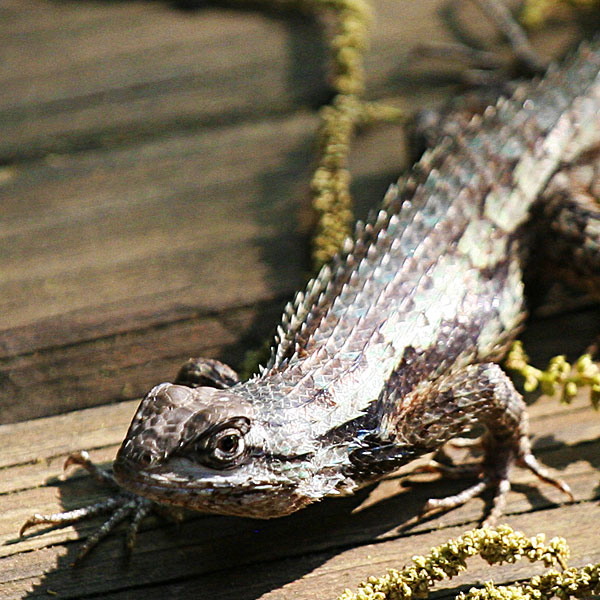 Perhaps we’re not that far removed from Jurassic Park after all.

That’s it for this this edition of Neighborhood Nature. Check back tomorrow as we focus on the insect world, with a couple of floral photos thrown in for variety.