You know how when you’re sitting in your recliner watching Netflix and eating roasted, lightly salted mixed nuts, and you drop one and it lodges between the cushion and the arm of the chair, and you know — you just know — that if you reach down to retrieve it, the outcome will not be retrieval at all, but the result will be that the nut will simply drop lower into the figurative bowels of the chair, and will be unreachable by human appendages without a ridiculous amount of effort, such as getting out of the chair and removing the cushion? That, my friends, is a perfect picture of inevitability.

So it is with running shoes nowadays. You search the world over* for the perfect running shoes to complement your perfect running style and perfect feet and toes, and when you find them, you think to yourself “I should buy about fifty pairs of these shoes so I’ll always have them.” But, of course, you don’t, and…inevitably…when you return to order a replacement pair, they’ve been “upgraded” into a completely unrecognizable configuration, with the only remaining common characteristic being the name and a hole where you stick your foot, plus a new version number, as if you’re purchasing software for your tootsies.

I’ve experienced this phenomenon countless times over my running “career.” I’m a New Balance guy and have been for decades. I started out in the Eighties with Adidas but soon found that the stability and cushioning that NB is known for better suited my joints. I’ve stuck with them even though nowadays I wear rigid orthotics that minimize if not downright negate those benefits as they accrue to a specific brand of shoe.

Also, I started buying so-called trail shoes about a dozen years ago, after we moved into a new neighborhood on the edge of town in Midland, and I ran on the surrounding unpaved ranch and oilfield roads. I’ve stayed with that style even though nowadays I rarely run anywhere but on paved roads and trails. They seem to have more durable soles and I like the traction on wet, hilly streets…something I never had to think about in Midland.

One might think that trail shoes probably aren’t as susceptible to the year-to-year model changes as “normal” running shoes which are lighter and more favored by serious runners. One would be mistaken in thinking that, at least where New Balance shoes are concerned. A NB shoe model has a life span of a gypsy moth. OK, I don’t know how long gypsy moths actually live, but I’ll bet it’s not very long.

The last pair of trail shoes I bought had the awkward and oxymoronic name of “Fresh Foam Hierro V4.” Hierro is Spanish for iron, which doesn’t seem to play well with the phrase Fresh Foam, which in turn evokes shaving cream. Regardless, it was a great shoe, with a built-in sock liner instead of a tongue. That feature added to its comfort, as well as providing an effective seal around the ankle to keep bits of gravel out of the shoe. The downside was that it took a while to get the shoe on and off, but nobody who was serious about triathlons would wear a trail shoe anyway so the extra transition time from bike to run wouldn’t be a factor. Uh, I’m getting into the weeds here, aren’t I?

Anyway, I wore the v4s for at least a year before I wore them out, and I fully intended to buy another identical pair. Well, guess what? Somewhere around the end of 2019 (aka, When Life Was Perfect In All Meaningful Ways Compared To 2020), New Balance murdered phased out the v4 and introduced the v5.

The new version has reverted to the traditional tongue in place of the sock liner, and the lacing system is kind of funky. (That’s a technical term of art in the running shoe design business. Probably.) But the most dramatic departure from the essentially traditional look of the v4 is the addition of a…a…an appendage, for lack of a better description, to the heel of the shoe.

Here’s a clever visual comparison of the v5 to the preceding generation (top): 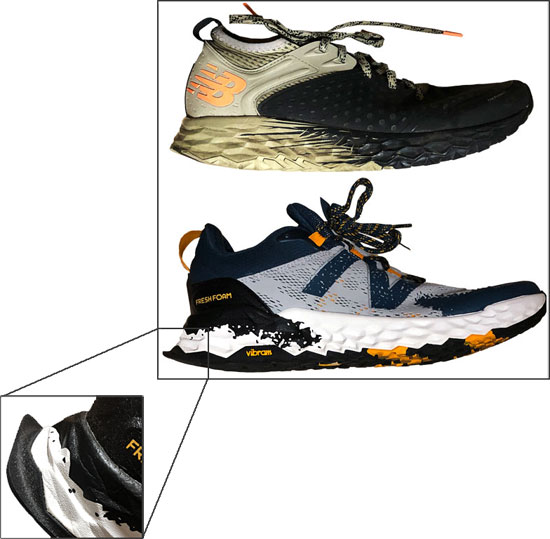 Someone at New Balance apparently thought it would be cool to add a spatula to the heel of the v5, and it’s even weirder looking in real life than in these photos. It’s purpose is unknown, to me anyway. One reviewer felt that it provided a copious crash pad, in particular when running downhill. Another reviewer lauded the look of the shoe, although his acknowledgement that most of the compliments he received came from children under the age of nine seems like a case of being damned with faint praise. And yet other reviewer — me — describes it as the product of an illicit relationship between an appendix and a clown shoe, with the defining characteristic being a hilariously useless bit of footwear anatomy.

Now, lest you think I’m a complete curmudgeon (I am, by the way), I’ve run in the shoes for a month or so and find them perfectly fine for my purposes and low standards for performance. The shoes are comfortable for my usual sub-five-miles-at-a-limping-snails-pace workouts, the Vibram™ soles are pleasingly grippy, and I have yet to step on my own heel, despite the gigantic trailing rudder.

That said, I’d be lying if I said I haven’t contemplated performing a rudderectomy on the shoes with a box cutter, but I’m fearful that the shoe elves at NB have somehow built in a failsafe mechanism that will cause them to collapse in a steaming, toxic heap of shoe slag if the appendage is fooled with.

The saving grace is that the disappearance of this disturbing design development is, well, inevitable.

*Fun fact: there are at least 50 albums with almost 30,000 lyrical phrases that include “search the world over.” We are living in the best of all possible worlds (thank you, Kris Kristofferson, for those additional lyrics) when such information is literally at our fingertips.