Editor’s note: The Editorial Board here at the Gazette has grudgingly come to accept that rudimentary animations in the form of gifs — pronounced with a soft “g” — must be tolerated, much as one tolerates the annoying-but-inescapable social behavior of toddlers and politicians. That said, the Board has put strict limits on the use of these crude illustrations in order to maintain the journalistic credibility of this publication. Sadly, the author of the following post has chosen to blatently disregard these limits. Please accept our apologies, and know that we condemn such insolence in the strongest of terms.

Hey, you guys…there’s really not very much interesting going on around here nowadays, so I’ve had to resort to manipulative creative approaches in order to transform the prosaic into the phenomenal.

For example, remember when I was telling you about how hot our courtyard gets during the day? Of course, you do. Well, just to reinforce that fascinating story, I’ve enlisted one of our resident plants — whose name I’ve forgotten — to reenact the deleterious effects of said heat. You can see the result via a mesmerizing time-lapse sequence, over to the right.

By the way, the creation of this gif took an embarrassingly large amount of time and effort; I trust you appreciate the lengths I go to in order to educate and entertain.

As long as we’re in the courtyard, at least mentally, I want to talk with you about what goes on out there in the middle of the night. Well, almost nothing, to be honest. But the little that is happening is a bit creepy.

I’ve got my trail camera set up to take a photo every five minutes, 24/7, whether anything moves or not (it’s also simultaneously configured to capture video if something does move). Each morning, I review the pictures from the previous day and night, an exercise that takes less time than you might expect given that nothing generally happens.

However, I have noticed that at some point in the wee hours of the morning, something emerges from beneath the flagstones, something tiny but whose eyes reflect the infrared flash of the camera and appear as tiny pinpricks of light in the darkness. Take a look at what I’m talking about:

These creatures appear like clockwork every night, and I’ve concluded that they’re tiny frogs. (They could also be spiders but I refuse to contemplate that possibility as it ratchets up the creepiness factor to unacceptable levels.)

(The preceding is presented as a public service to those readers with a abnormal perfectly understandable aversion of our neighbors of the serpentine persuasion. If you fall into this category please seek therapy click here to jump to some squirrel-related stuff.)

A few days ago, Debbie was in the back yard testing the sprinklers in one of our flowerbeds, which actually doesn’t have any flowers, but is filled with big liriopes. A movement caught her eye and she discovered a small snake threaded through the leaves of one of the plants, apparently enjoying the impromptu shower.

She texted me (I was in the house doing something important, like taking a nap) and I grabbed my DSLR with a macro lens and took a few photos. I couldn’t identify the species but she had an educated guess (which turned out to be correct, of course). We posted one of the photos to the Central Texas Snake ID Facebook Group, which has become one of our daily references, and the experts that administer that group identified it as a western coachwhip (Masticophis flagellum testaceus).

Coachwhips are nonvenomous, beneficial snakes that prey upon other lizards, amphibians, and varmints such as rats and mice. They will also eat other snakes…including venomous varieties such as rattlesnakes. In other words, they’re good neighbors.

Ours was only 18″ in length, but coachwhips can grow to be six feet or longer. As their common name implies, they are extremely fast snakes. They are shy and will flee when approached, but if cornered and/or handled, they won’t hesitate to bite. Again, they’re not venomous, but nobody wants a snake bite, right?

Following are a couple of the photos I took of the water-beaded coachwhip. 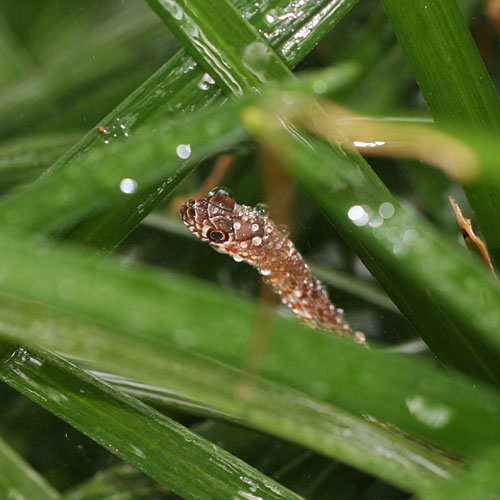 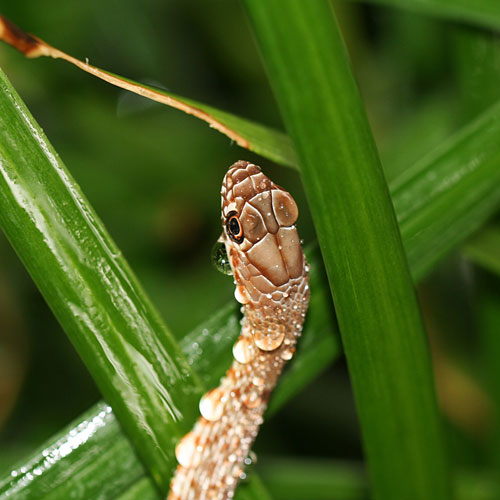 The little guy posed patiently for photos and admiring comments from onlookers, then disappeared under the plants after the water turned off. Debbie spotted it the next morning in almost the same location. We assume that it’s dining on the tiny frogs that inhabit the back yard (and, possibly, the front courtyard…as we’ve already discussed above).

Now, onto to last matter, and we welcome back those of you who chose to skip the preceding fascinating content.

We’ve got about eleventy billion squirrels in our neighborhood. As I’ve mentioned before, despite being surrounded by pecan trees, and living in a neighborhood named after pecans, we never get any because the squirrels harvest them all. But that’s not what I want to tell you about.

If you have squirrels around you, you’ve probably heard them on occasion chattering in the trees in a state of apparent alarm or anger. Sometimes their diatribes are directed at other squirrels (hey, you &#%^$^, that was MY pecan!) but they also seem to raise a general alarm when something threatening is nearby.

I was in our front yard when I heard this kind of commotion coming from an oak tree. The squirrel making the noise was fairly quivering with disapproval of…something. My first thought was that it had spotted a snake in the lawn, or even in a tree, as rat snakes are fairly common around here and they are amazing climbers. So, I walking into the grass beneath the tree where the squirrel was still expressing its displeasure, but I saw nothing.

I looked around, still seeing no threat, and was about to go back inside, chalking up the squirrel’s theatrics to inscrutable squirrel behavior, when I glanced up in a tree about 25′ away. Perched there in the
fork of two big limbs was a rather good-sized hawk, and the raptor was the obvious target of the squirrel’s alarm.

I found the tableau amusing, as the hawk had its back turned to the distraught squirrel, as if to say “I know you are but what am I” or something equally childish.

I created a short video to capture what I’m now referring to as the Early Squirrel Warning System. Be on the lookout; it’s coming to your neighborhood if it’s not already there.