Hey, y’all…is it hot where you live? This is the time of year where we resurrect General Sheridan’s quote about preferring to live in Hell and rent out Texas, which makes a lot of sense until you wonder just who, exactly, would be willing to rent Texas during August?

Alert Gazette readers will recall that a couple of months ago Debbie and I watched a Texas spiny lizard dig a nest in our front courtyard, lay eggs, and then cover the nest. Well, we’re at the front end of the normal range of time in which those eggs should be hatching, but I have to admit that I’m not too optimistic about the prospects for having tiny lizardlings frolicking about.

I set up a trail camera on a tripod and pointed it at where the nest is located, under the assumption that when (if?) the little guys dig their way out, the movement will result in the camera recording both videos and still photos of the action. The camera is set up to capture the date, time, and ambient temperature at the time images are captured, and as you can see below, we’re dealing with some rather extreme environmental variables: 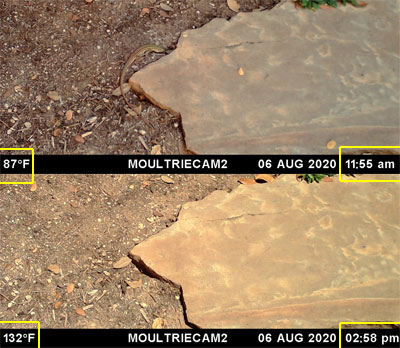 I realize that the camera’s readings are much hotter than the actual air temperature, but I also believe that the bare dirt is absorbing a significant amount of heat for a few hours each day. I doubt that the temperatures a few inches underground, where the eggs are resting, reach anywhere close to 130º+, but even twenty degrees cooler might still be too hot.

I did find this article about incubating lizard eggs and it confirms that desert-dwelling lizard eggs will hatch in higher temperatures, which seems obvious, but its reference to “92 [degrees] or higher” is not altogether reassuring.

As an aside, the article does describe the phenomenon whereby the sex of the hatchlings of some species varies with the temperatures in which they’re incubated. For a leopard gecko, a range of 80 to 86 degrees will result in mostly females, while temperatures between 86 and 92 gives mostly males. But it gets really interesting here: if incubated at 92 to 94 you will get females that have bad tempers and are infertile. These are called hot females. [You can insert your own joke here if you’re brave enough.]

So, I guess I’ll give things another week or so and see how they play out. I suppose bad-tempered lizard babies are better than none at all. I’m pretty sure I couldn’t tell the difference.

Speaking of Texas spiny lizards, take a look at this photo and raise your hand when you see it. 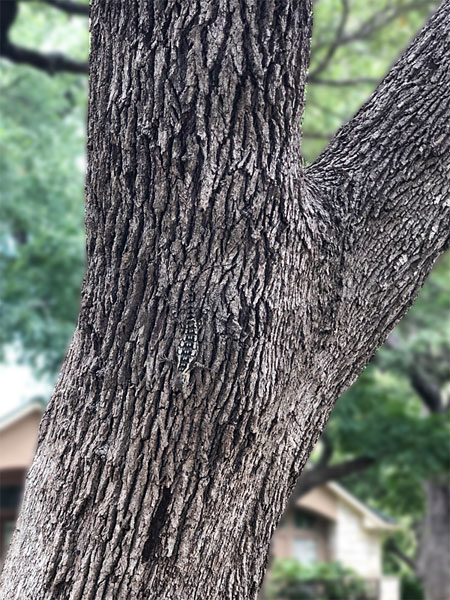 Those lizards are amazingly well-adapted to camouflage themselves on the rough bark of oak, pecan, and cedar elm trees. In fact, you could go so far to say that they are veritable masters of disguise, which is evident when this photo is enlarged. 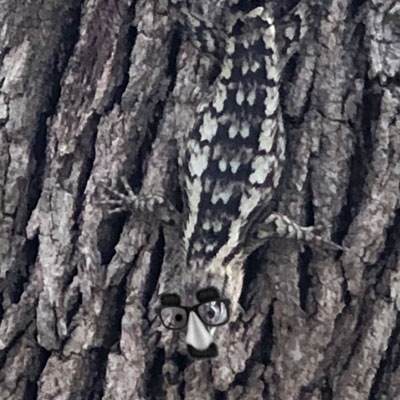