One late afternoon last week, Debbie was looking out a dining room window and spotted a strange sight in the courtyard. She called me over to have a look, and for the next couple of hours, we watched a fascinating process unfold.

Alert Gazette readers will recall the previous post in which I described, by word and by photograph, the behaviors of the three most common species of lizards around our house. I mentioned the Texas spiny lizard only in passing – I didn’t have a relevant photo to share – commenting only that it is skittish and secretive. So, we felt privileged to witness the scene taking place in the courtyard: a female of that species digging a nest, laying eggs, and then covering and leaving them to hatch.

Naturally, I took photos of the process. I must apologize in advance for the poor quality of most of them. Some were taken at a very odd angle through the window, and some are just the product of an old camera and an older photographer. But I think you’ll be able to discern all the subjects, and I hope you’ll share our wonder at seeing something that’s rarely witnessed by humans.

What first caught Debbie’s eye was the half-buried lizard busy excavating a hole. We initially thought she was perhaps digging for insects to eat, but the hole seemed too big for that. 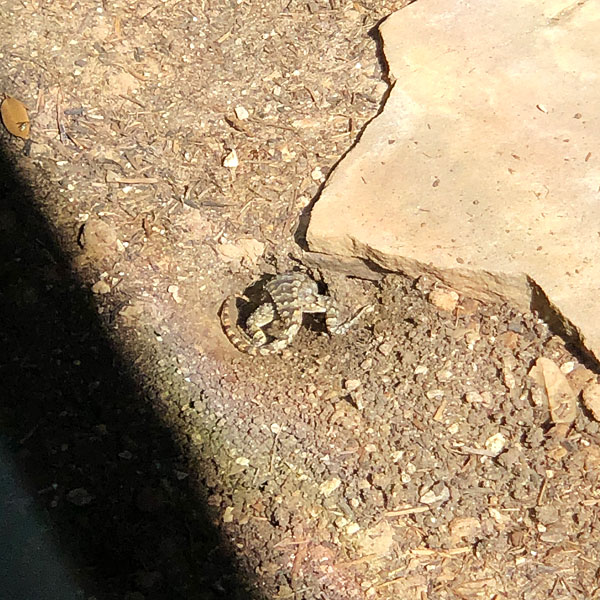 While I was trying to get photos, Debbie was busy finding out more about the nesting habits of the lizard. She found this very informative website which seemed to confirm that what we were watching was indeed a nest building exercise. (The photos are better, too…but more limited in scope than what follows.) That article describes the preferred site for a nest as being one with fairly dry, loose soil, good sun exposure, which also happens to be a perfect description of our courtyard in every respect. 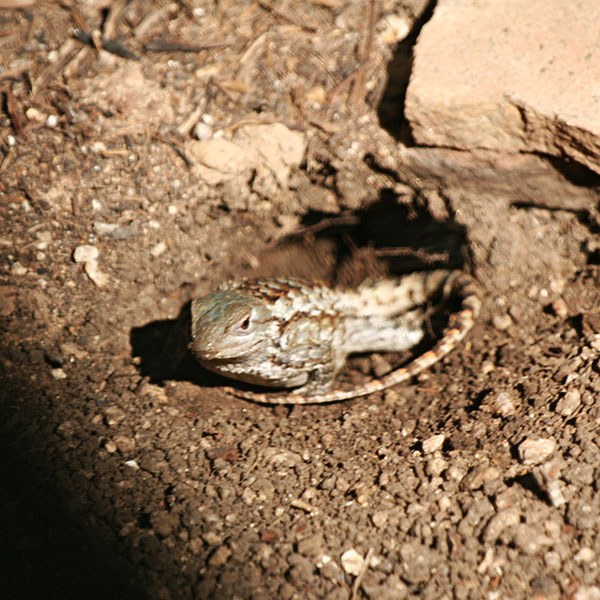 Once the hole was several inches deep, the female backed into it. At that point, sensing that things were about to get real, I crept out into the courtyard and tried to get some pictures without disturbing her. I was successful in the latter; the results of the former are fairly sad. 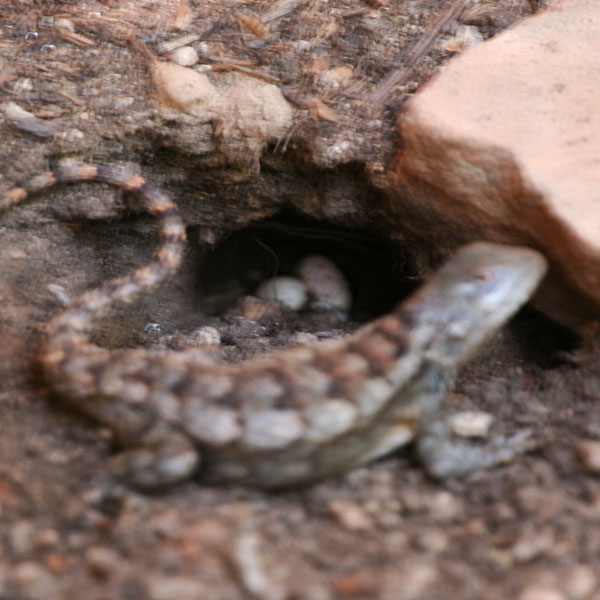 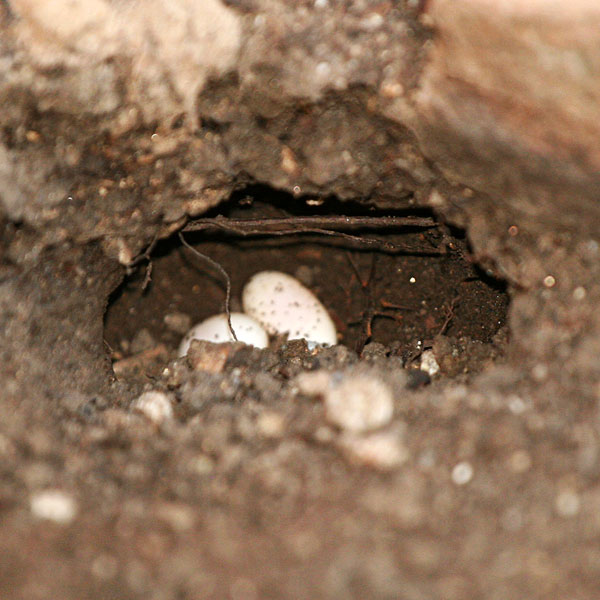 In the top photo, you can just make out a couple of eggs in the nest. That’s a far cry from the eight to 30 mentioned in the article, but perhaps the others were buried before I got the photo. Or maybe she’s just an underachiever. The bottom photo is a little clearer. They do resemble bird eggs, so perhaps that theory linking birds and dinosaurs in the evolutionary chain isn’t farfetched at all.

Once the eggs were deposited, the lizard got busy covering them…and I do mean busy! In fact, for the next hour she devoted herself to restoring the ground over the eggs to its original state. This behavior is common among reptiles, and I’ve documented it for turtles a couple of times previously. 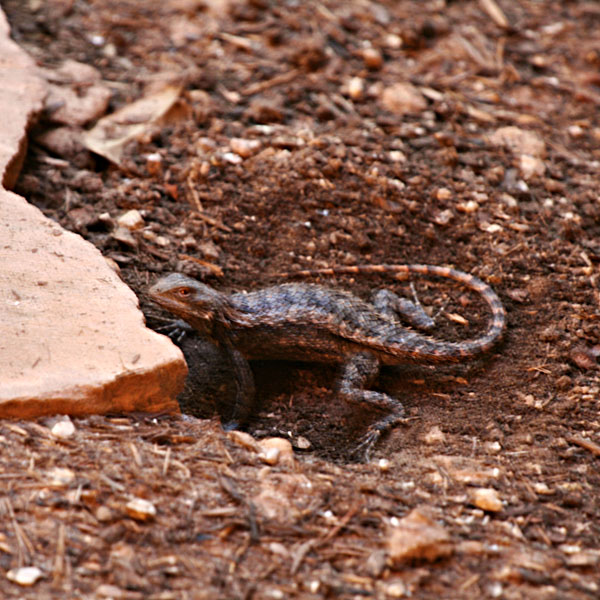 The nest hiding process went something like this. She would back partway into the hole, then use her front feet to send loose soil backwards. That loose soil was then flung into the hole by her back feet. She would periodically pause in these efforts to turn around and push the fill dirt with her snout to compact it. This sequence was repeated countless times until the nest was completely covered and undetectable to the casual observer.

Midway through the process, things took an unexpected and captivating turn, as a six-lined racerunner entered the scene. At first, it came within a few feet of the spiny lizard and then headed off, but then it turned around as if curious and actually made contact with the female. Here are a couple more photos of the encounter. Again, my apologies for the photography; these were taken through the dining room window with the camera at a very uncomfortable angle. 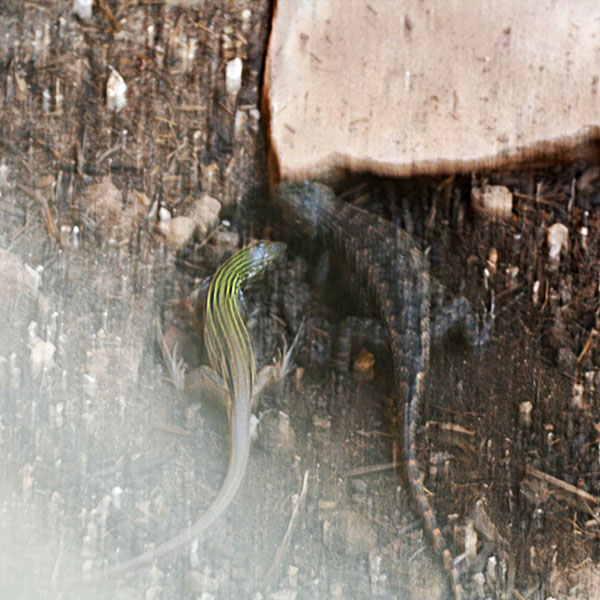 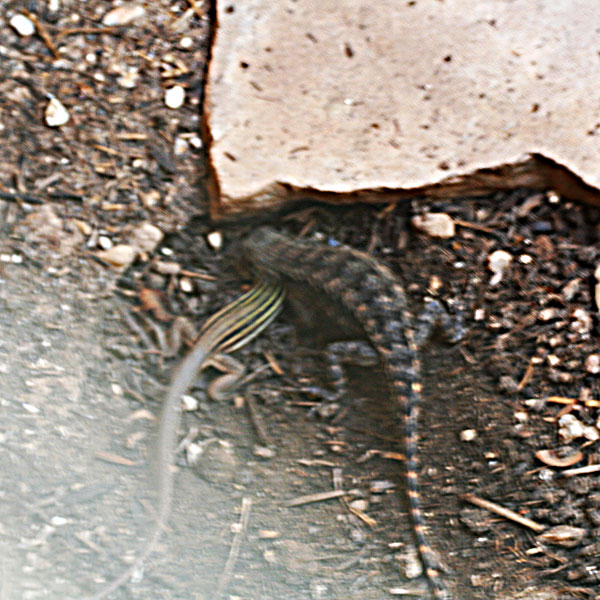 We feared that we were about to witness one or both of the following: an attempt by the racerunner to dig into the nest, and a fight to the death between the two lizard species. In reality, neither occurred. The racerunner really did just seem curious, and the spiny lizard, while cautious and protective, didn’t act belligerent toward the racerunner. After a bit of scrambling around, the racerunner disappeared under the flagstone, which presumably covered its lair.

After this brief encounter, the spiny lizard continued hiding the nest, and about two hours later, apparently satisfied with her efforts, disappeared. Her job was finished; she will not return to the nest (spiny lizards are typically arboreal; they blend in perfectly with tree bark), and if all goes well, the eggs will hatch within about 45 days.

Update (06/16/2020): After I posted this I realized that I had forgotten to mention a rather fascinating — and surprising — behavior on the part of the lizard. When she was about 3/4 finished with the coverup process, I went out into the courtyard to take some photos. I tried to move slowly and quietly so as not to disturb her, but she bolted away from the nest and out of sight on the porch. We figured that the camouflage effort was finished and would have to suffice.

But, much to our surprise, after I went back in the house, she returned to the nest and continued to scrape dirt and rocks back over the nest until it was finished. The primal urge to protect her eggs is strong and apparently irresistible, even though she’ll have nothing to do with them once that task is finished. Put another way…she takes pride in her work, but has a pretty narrow definition of the scope of that work.

Here’s how the nesting area looked following her camouflaging efforts. 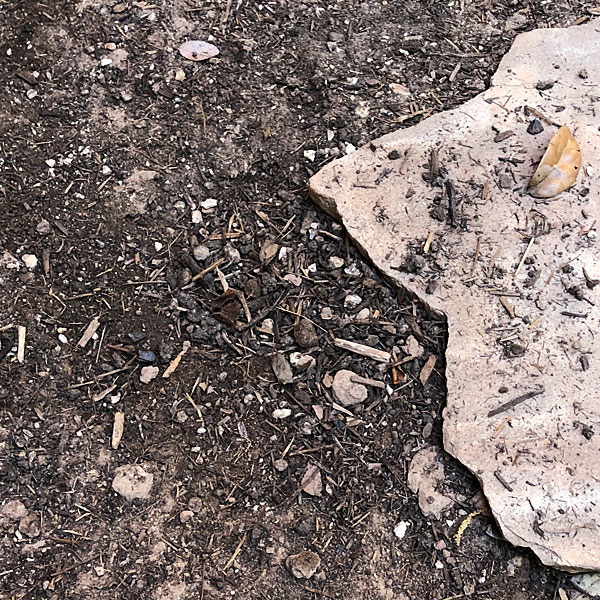 Debbie and I will, of course, monitor the situation over the next six weeks and, assuming nothing obviously untoward happens, I plan to place a GoPro camera on a tripod to take timelapse photos of what we hope will be the emergence of at least a couple of brand spanking new Texas spiny lizards.

Update: The eggs never hatched. They were either eaten, or they succumbed to the intense summer heat. Life is tough.