Imagine, if you will, a pair of drunken-yet-paradoxically-overcaffeinated zombies staggering along a tree-lined cart path on a golf course. That mental picture is not far from the reality of my and Debbie’s morning runs lately. You see, we are well into the Season of Dangling Worms here in the Texas Hill Country, and the act of walking, running, or sometimes even just standing under oak trees can result in becoming draped in obnoxious fashion by…well…dangling worms.

An inch worm inches (ha!) its way across our garage floor.

Our erratic jogging movements result from mostly futile attempts to avoid the caterpillars that hang from almost invisible strands attached to every single oak limb in existence. That’s almost not an exaggeration. And because the worms are tiny and their bungee cords invisible, we can’t always spot them until the last second.

Our clumsy avoidance technique yields mixed results. We’ve taken to doing a worm check on each other after our outdoors sessions. Debbie compares it to monkeys grooming each other, although I’m not sure we’re that elegant. Even so, yesterday I brought two caterpillars in with me on my shirt after our run, and Debbie later had a hitchhiker in her hair. Yes, it’s all fairly disgusting.

At this exact moment in time, we have at least three different varieties of caterpillars gracing us with their presence: oak leaf rollers (on the right, in the photo below), cankerworms (also known by the less odious name of inchworms), and a larger one (on the left), whose identity remains unknown to me. [Update: The one on the left is a forest tent caterpillar. We have a fair number of them, mostly crawling on the walls of our house, but it could be much worse.] 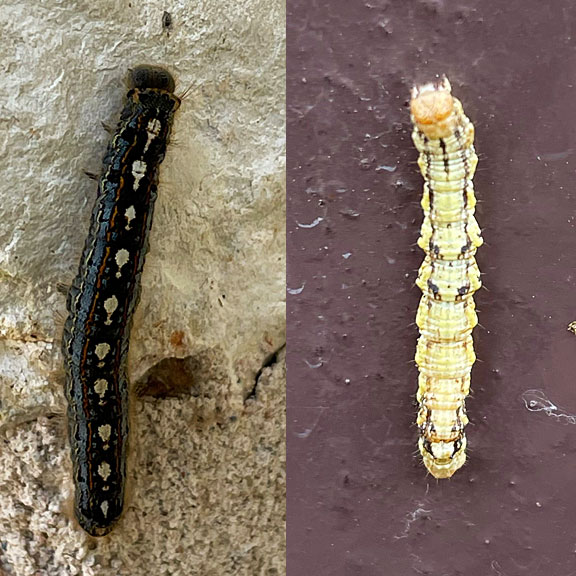 The scale in the photo is misleading. The specimen on the left is at least twice the size of the leaf roller.

If there’s any good news in this situation, it’s that the infestation is quite short-lived. We should be past all of this in a few more days, and it’s smooth sailing until *checks calendar* May, when the walnut caterpillar invasion begins.

In the meantime, if someone tries to tell you that these little dangling creatures pose no real threat to humans, let me assure you…the truth is much more complicated and dark: 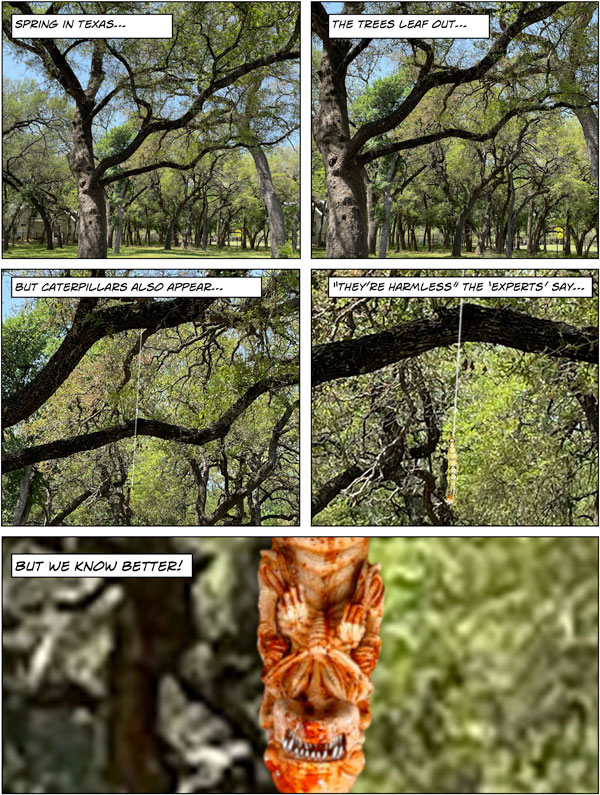