Warning (Nerd Alert): This post careens pretty far into the weeds on a rather obscure topic. Perhaps its saving grace is some pretty pictures.

My dad was a dedicated collector of…everything. He had copious quantities of stamps (we’re talking thousands) and coins (a hernia-inducing amount, to be exact). He, along with my mom, “invested” in enough Norman Rockwell commemorative plates to equip a state dinner at the White House. I recently found a stash of date nails (which I never realized was a thing) in one of his storage rooms.

I’ve [re]discovered all of these things and more while cleaning up the old homestead in preparation for selling it. The value is mostly sentimental — although the coins are at least worth their face value — but there’s one collection that might actually be more valuable than I first though: glass insulators.

If you’re new to the world of glass insulators, here’s a quick primer. Shortly after the invention of the telegraph and telephone, in the mid-19th century, insulators were developed to serve two purposes. One was to provide a method of attaching the transmission lines to poles, and the other was to prevent the loss of the electrical current that carried the actual transmission, hence the term “insulator.” Some of these devices were made of porcelain, but glass turned out to be less expensive and for 50 years or so, beginning in the late 19th century, glass insulators were manufactured by the hundreds of millions. Nowadays, while insulators are still used — primarily on high voltage electric transmission lines — they’re generally made from ceramic or polymer materials. [Source]

I have no idea where Dad acquired them, but he had lined up almost 200 insulators along the rafters of their carport, and they had remained there for decades, collecting dust and the occasional spider or wasp nest. They looked unimpressive, but some quick research revealed that if cleaned, they might be attractive to other collectors, or perhaps antique dealers or similar resellers.

So, I climbed a ladder and carefully boxed them up (a typical glass insulator weighs more than a pound so the four small moving boxes were over fifty pounds each) and stacked them in the bed of our truck for transporting 300 miles back to our house.

I then set up an assembly line of sorts to clean them. I’m sure you won’t be surprised to learn that there is a vast number of resources devoted to glass insulators, and this one provided the clearest options for safely cleaning them. I chose the acid method, and found some oxalic acid — sold as “wood bleach” at a local hardware store. I diluted a gallon of the acid with three gallons of water in a plastic five gallon Home Depot bucket. This was to be the method of removing decades of haze from the glass…or so I hoped.

But before dropping insulators into the acid, I used a garden hose to remove as much dust, dirt, and evidence of insect habitation as possible. Someone — my Dad or the previous owner — had numbered some of the insulators using plastic embossed label tape, and I had to use a knife to scrape those labels off. Once this preliminary step was complete, I carefully dropped about 20 of the insulators into the acid solution and let them soak for 24 hours.

At the end of that time, I transferred them to another five gallon bucket filled with clean water to rinse the insulators. I then fished them out one at a time and carefully dried each one with a microfiber towel. Insulators have a fair amount of nooks and crannies so this was a somewhat tedious process. However, the results were, in my opinion, stunning. I didn’t take any “before” photos, but here are some “after” photos. [If you pretend you have serious cataracts in both eyes, that should allow you to visualize (or not) the unclean specimens.] 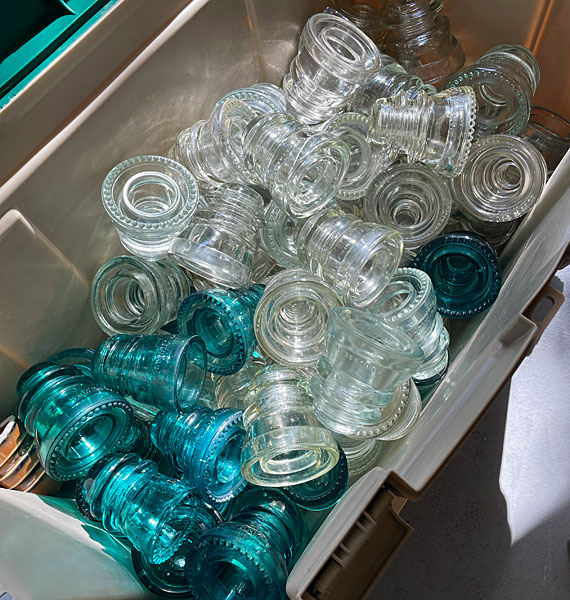 This is just a portion of the total number of insulators in the collection. 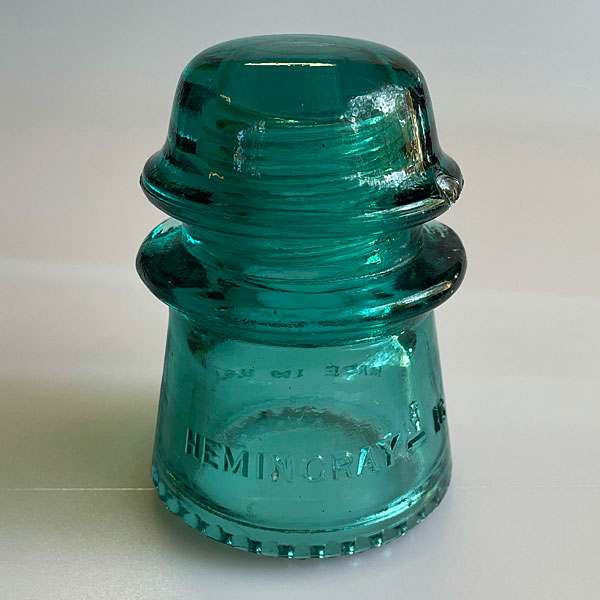 Hemingway was the most prolific manufacturer of glass insulators. It ceased operations back in the 1970s 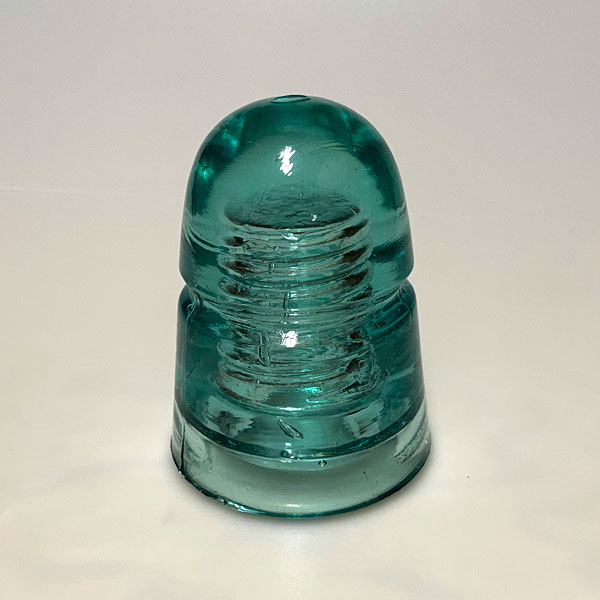 Some of the insulators were of a smaller variety. The internal threads identify these insulators as “pintype” or “pin” insulators. They were screwed onto metal or wooden inserts to hold them in place on poles (see below). 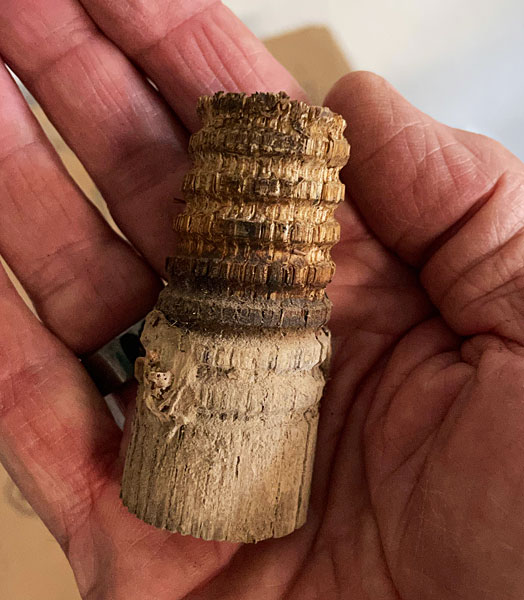 One of the insulators was still screwed onto this wooden pin, broken off the cross arm of a telephone pole. 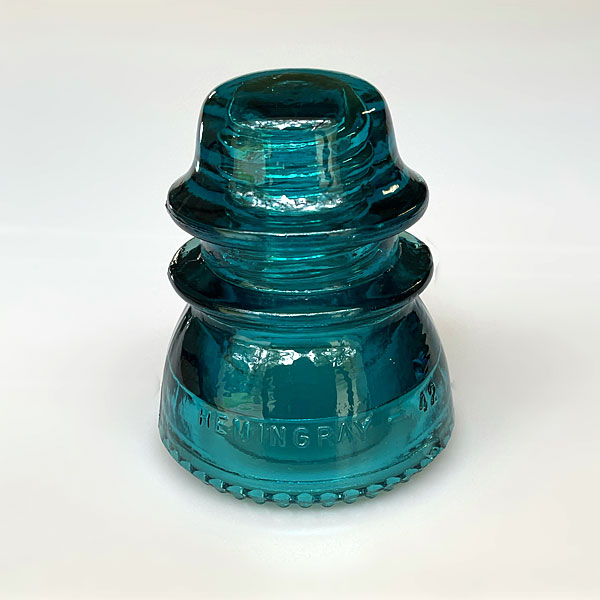 The blue color was unique; only one such example was in the collection. 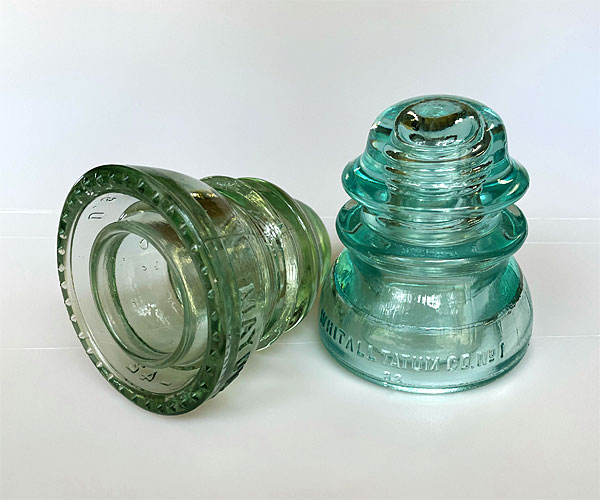 The internal rings are referred to as “petticoats” or “skirts.” Those “bumps” around the base of the insulator on the left are called “drip points,” and they are designed to draw moisture away from the insulator. 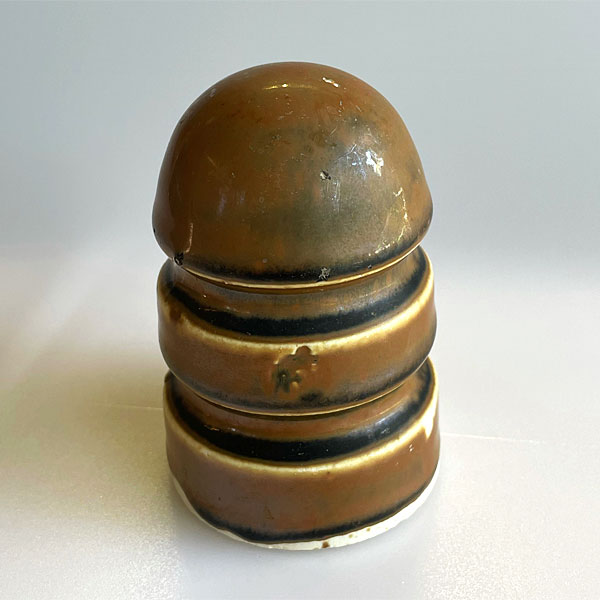 This is the sole example of a porcelain insulator in Dad’s collection. According to an expert that I consulted, this is “probably” a U-52 style insulator, worth perhaps $10.

I find this all very interesting from a historical perspective, but also because I never realized that the population of glass (and porcelain) collectors were so well organized. Indeed, the National Insulator Association is a 501(c)(3) “educational and scientific organization” with more than 1,700 members, mostly across North America.

There are also multiple price guides of varying quality designed to help you determine the value of an insulator. I purchased one such guide which can be accompanied (for an additional fee) by an online browser-based graphical user interface to make it easier to locate a specific design. The challenge is that there are literally thousands of variations to sort through — the price guide lists almost 80 different colors, for example — and it will take a keener eye than mine to definitively identify any given model.

Below is an excerpt from the above-referenced price guide showing the description of a single model of insulator. 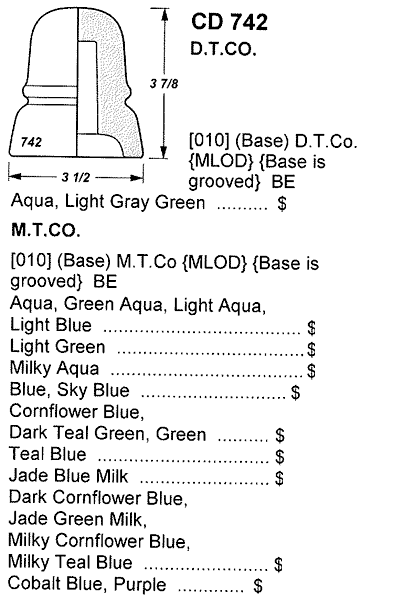 Feel free to enlighten me as to how to distinguish among the three listed shades of cornflower blue or the four shades of aqua. (I’ve obscured the prices to protect the investment of the publisher of the guide.)

What’s the bottom line for all of this time and effort? Well, aside from learning more than I ever thought I wanted to know about glass insulators, I hope to find a buyer (knowledgeable or otherwise; the latter might even be preferable if they have cash to burn!), and monetize the collection on behalf of my mom. I suspect that good quality, clean insulators probably retail for an average of $10 apiece in antique stores; creative hobbyists might also be willing to pony up at that level. (This also assumes that there are no really rare, really valuable collector-worthy specimens in the group, and I’m not sure I’ll go to the effort of trying to find out.) I would be happy clearing 50% of that average. So, if you know of anyone who might be interested, feel free to send ’em this way!