Boy, there’s a lot going on nowadays in the Wonderful World of Nature, so let’s just dive right in. (Notice how I worked in a reference to the Summer Olympics? Take that, interns!)

Our garage has been a focal point for a couple of observations. First, a yellow garden spider has set up shop on a shrub right outside one of the garage windows. I’ve watched it grow into a pretty big specimen. 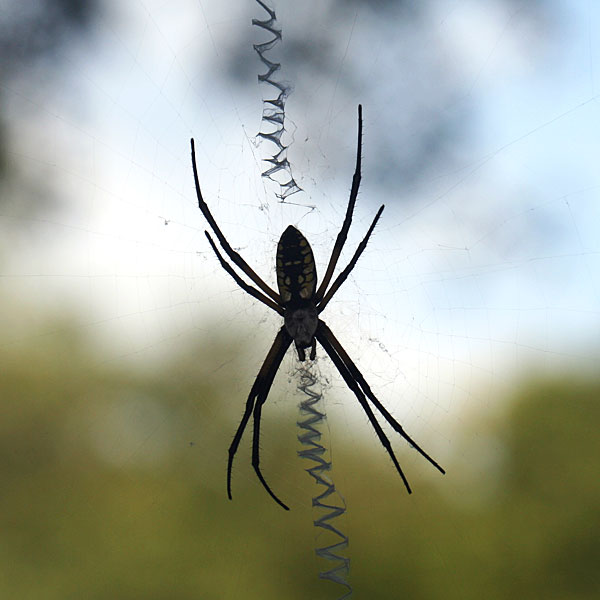 That thick zig-zag is the stabilimentum.

The spider itself is not my focus today (although it does creep me out a bit), but the topic of these spiders’ stabilimenta is pretty fascinating. It’s one of the mysteries of nature, in that we don’t really know for sure what its purpose is. Some think it’s to warn away birds who might inadvertently destroy the web by flying into it; others think it’s to attract prey, or simply to strengthen the web. I found this college student’s essay to be a great discussion of the alternatives.

Speaking of mysteries, I’ve recently noticed a virtual absence of insects inside the garage, and while this is a welcome development, I can’t help wondering what’s causing it. That mystery was solved a few days ago. 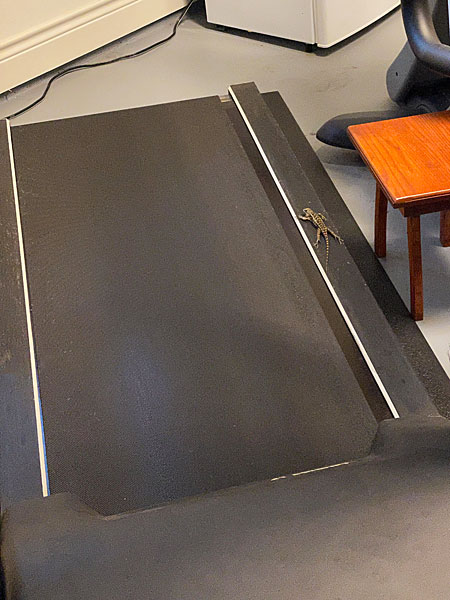 Even lizards need rest after a hard treadmill workout.

This is a Texas spiny lizard, and alert Gazette readers will recall that they have been the focus of a number of previous posts. 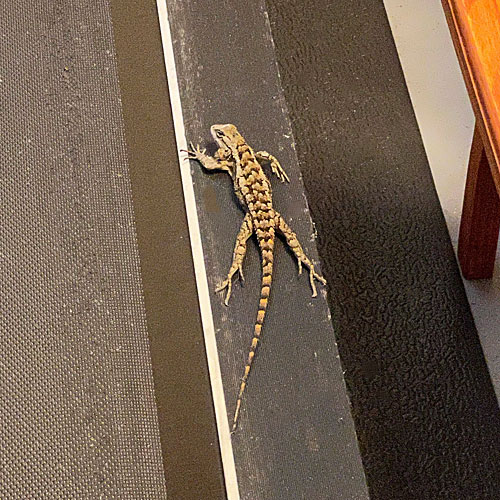 Better — and cheaper — than an exterminator

I’m pretty sure that this good-sized lizard is responsible for keeping the garage relatively bug-free. There are only two downsides. The first is when I forget that he’s around and turn on the light early in the morning just in time to spot him out of the corner of my eye running across the floor. And the second is…poop. I think you know what I mean.

Speaking of lizards — and mysteries — Debbie spotted a tiny one on our front porch wall. 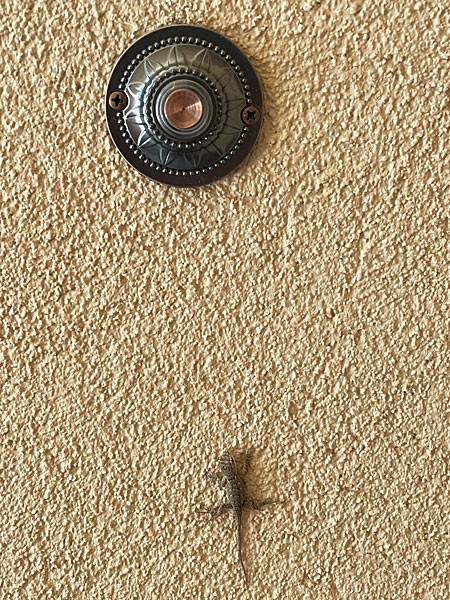 The doorbell is just over 2″ in diameter. 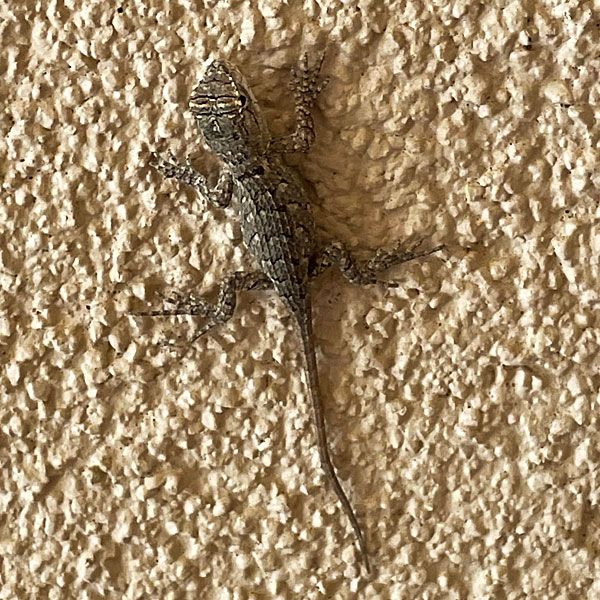 Regardless of species, it was pretty chill about getting photographed.

When I first looked from a distance, I thought it was a baby anole, but immediately dismissed this idea when I got closer. Then, I figured it was a juvenile Texas spiny lizard, but the scales on the head didn’t look right. I posted a photo on the Texas Reptile and Amphibian Identification Facebook page, and received several conflicting species suggestions, but the one from the most knowledgeable person was that this is a juvenile prairie lizard.

That’s highly interesting to me, because I’ve not seen one around here before. I’ve submitted this sighting to iNaturalist where I’m sure I’ll get a definitive answer.

Switching gears, let’s move on to the insect world, where once again Debbie called me over to see a grasshopper moving slowly up our sliding glass door. It was a perfect pose for a picture. 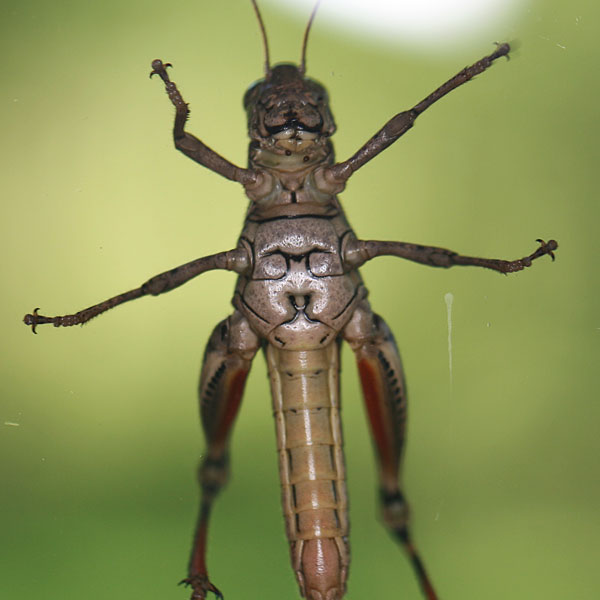 If you think there’s something vaguely familiar here, you’re not alone.

Now, we could go into a detailed discussion of the various parts of the typical grasshopper underbelly, but we all have better things to do. Still, if your curiosity remains (or appears) after your next margarita, you can visit this page, courtesy of the University of Wyoming, whose high jump team’s mascot is…OK, I’m just kidding. Probably. Who knows, really? Anyway, we’ll save the boring scientific and accurate stuff, because this is what I immediately saw: 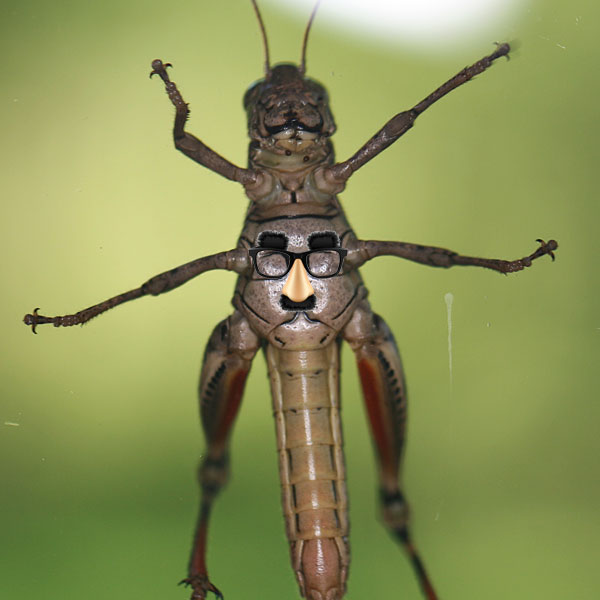 “I never forget a face, but in your case I’ll make an exception.” — GM

I thought about submitting this to iNaturalist but they’d probably cancel my account.

Oh, hey…we haven’t checked in on the local amphibian population yet, and this next one is a doozy (I’m pretty sure I heard Groucho Marx say that once.). And, again, we can thank Debbie for it: 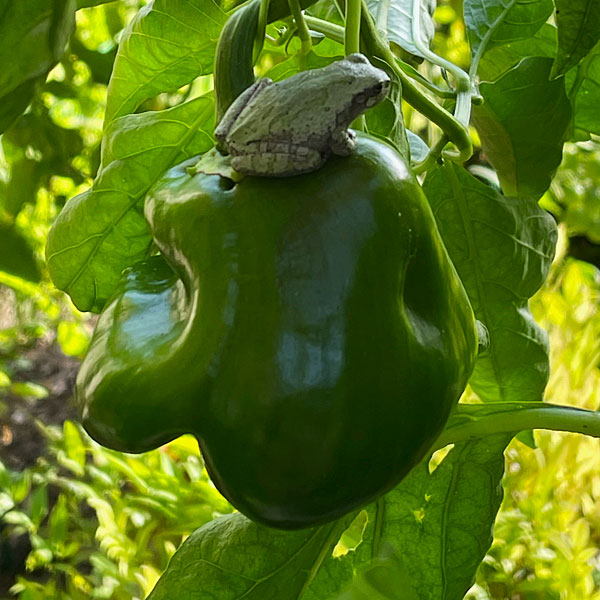 This is a gray tree frog who needs to take a remedial botany course because this bell pepper plant is not now and never will be a tree. I’m also going to think twice about eating any of our peppers now.

Last year, we routinely found tree frogs under our deck chaise lounger cushions every summer morning. But when they didn’t reappear this year, we feared that the Great Texas Snowpocalypse last February might have wiped them out. Fortunately, they’re apparently tougher than that, and they’re back under the cushions as well as on our produce.

Now, last but not least, we’ll wrap things up with some mammals, and I get the credit for this sighting (which, to be honest, is nothing special, considering that you can’t swing a rutabaga around here without hitting one of these guys): 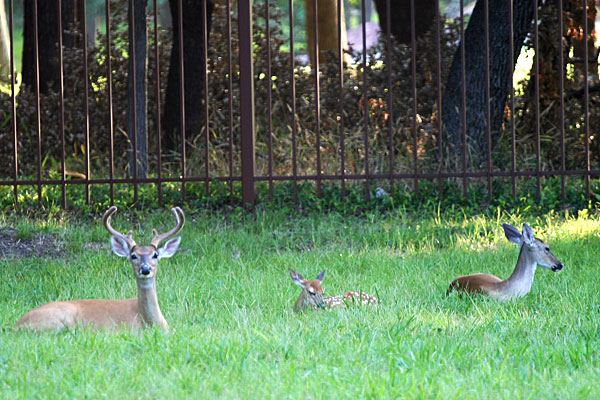 Olan Mills would be proud.

Every evening around 5:30 or 6:00, whitetail deer gather in the vacant lot next to our house to browse. It may be the same group, with a few variations, but there’s usually several does, one or two fawns, and a buck may or may not grace them with his presence.

If you look closely, you’ll see that the buck still has its velvet antlers. Here’s a good source of information about deer velvet (that’s not focused on its dubious uses in medicine). [This website also contains some photos and descriptions of the process of shedding the velvet and if you have a weak stomach, you might want to skip over that.]

Incidentally, browsing is different than grazing, and different species of herbivores will usually do one or the other, but not both. The distinction is important, because that’s why our local lawns are safe from deer. Anytime you see a deer apparently grazing in a lawn, it’s really looking for acorns or leafy weeds