Today marks the 19th anniversary of the Fire Ant Gazette. In the WWW (Wonderful World of Weddings), the 19th anniversary is represented by bronze — the metal, not the color — which apparently symbolizes strength and endurance, and I suppose that’s apropos for almost a fifth of a century of writing stuff for no apparent reason other than it’s what I like to do.

When I started the blog, in the patriotically angry aftermath of 9/11 — the start of the Golden Age of Blogging, may it rest in peace, I was game to take on all sorts of topics. I wrote about politics, local and otherwise; religion, mine or others; sociological and cultural phenomenon, controversial or — well, always controversial — and all without the self-realization that I didn’t know anything about any of that stuff. Thankfully, for myself and those of you kind and patient enough to bear with me, I finally figured that out and stopped. Well, mostly.

I recently ran across a tweet by Peter Sagal, the author, Runner’s World columnist, and NPR correspondent, in which he laid out his rules for doing Twitter. I’ve stolen borrowed them because they also apply to blogging, and represent more or less my evolution from an ignorant firebrand-ish writer to an ignorant, easier-to-get-along-with dude. I’ll let you judge how closely I’m now adhering to most of Sagal’s suggestions: 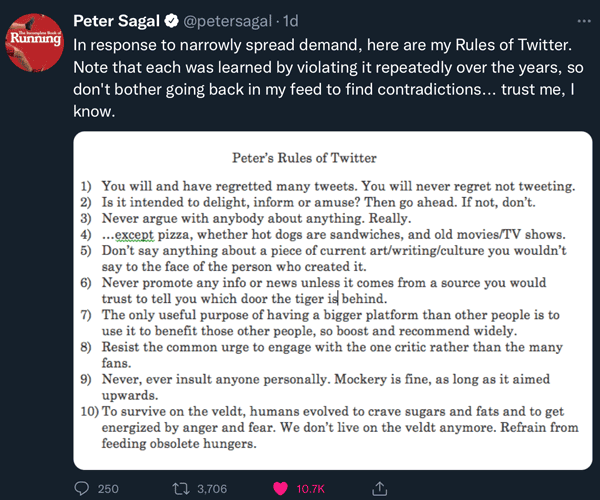 A couple of weeks ago, someone asked me how they would know when I posted something new on the Gazette. I was extremely flattered by the question, even as I secretly pitied their obviously skewed priorities, and I half-jokingly replied, “just visit the Gazette every day and you’ll know.” I really hope none of you are doing that because I don’t need any more pressure that I already put on myself, but, boy, do I appreciate all of you guys who do stop by periodically to do me the extreme favor of pretending to be interested in what I put on the Gazette.