That was the opening paragraph in an editorial in today’s Wall Street Journal. And I can’t make a convincing argument against that assertion. In less than a week, the political and economic dynamics of the world have been upended and certain nightmare scenarios are no longer as improbable as before.

May God have mercy on this broken world of ours.

I know that a lot of Gazette visitors come here by way of Facebook, so what follows has likely already been seen by you. I still feel compelled to post it here for the Historical Record.

I created and posted graphic the following to FB on 24 February 2022, the day the Russian invasion began in earnest. For some time prior to that I had been contemplating the indisputable fact that Vlad Putin was a world-class liar — a liar of Satanic proportions in fact, given that his lies would result in death and destruction on a horrific scale.

I guess I gave vent to some frustration by firing up Photoshop and creating this (Maybe I owe Satan an apology for putting him into such awful company): 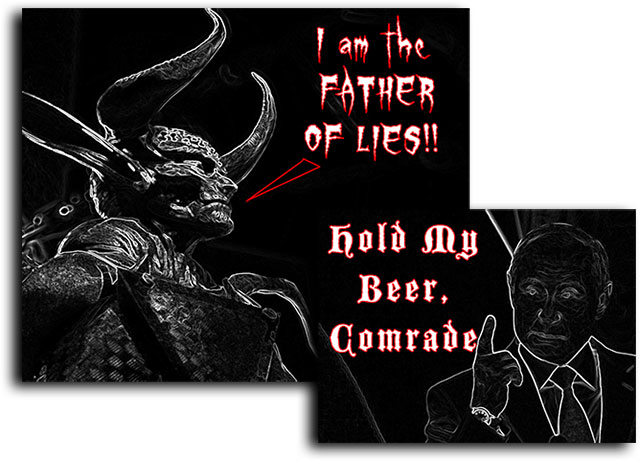 One really unfortunate effect of the invasion of Ukraine is the way it’s pitting some Americans against each other. I seriously doubt that there are very many of us who don’t sympathize with the Ukrainians and aren’t suffering some psychic damage from the situation.

That’s causing people to say some things that are guided more by emotion than logic (gee…does that really ever happen?). For example, this showed up on my Facebook feed today: 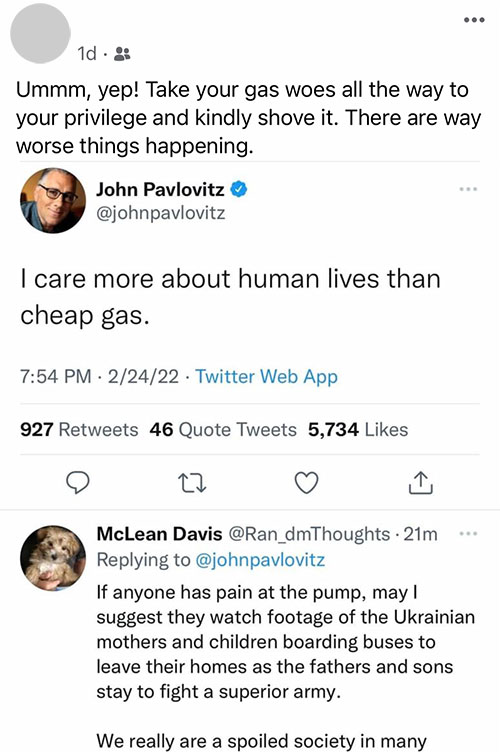 I know the person who posted this, and I’m sure that they are posting out of helpless emotion and sympathy, because I doubt that they believe that one can’t simultaneously care about two different things.

But their implication is that the plight of Ukraine somehow renders selfish and irrelevant that of, say, the retired couple living on Social Security who are facing a real choice between buying gasoline so they can drive to doctors’ appointments or buying food. Or the single mom who now needs to decide whether to buy gasoline to continue driving to work, or paying the rent. In other words, there are real and valid reasons for “caring about gas prices” that have nothing whatsoever to do with “privilege” (whatever that means–we’re not dealing with the increasing difficulty of keeping our pantries stocked with Russian caviar).

In any event, it seems to me that the last thing our country needs is something else to divide us. Surely we can muster enough empathy/sympathy to go around.