The patient is in critical condition, surrounded by medical professionals who are frantically working in uncharted territory.

The patient, just four years of age, has something in her bloodstream that is preventing it from clotting. The medical team knows what it is, but the patient’s unique characteristics are posing a challenge as to the right treatment.

She’s now going into respiratory failure, and the medical team makes the decision to put her on a ventilator.

But immediately thereafter, the patient goes into cardiac arrest, and the situation becomes even more dire. She is in Arizona, but a team of medical professionals and scientists as far away as Mexico and Argentina are being consulted to try to find a way to save her life.

The patient is a bird — a red-tailed hawk, to be precise — named Sonora. And she’s a snakebite victim. 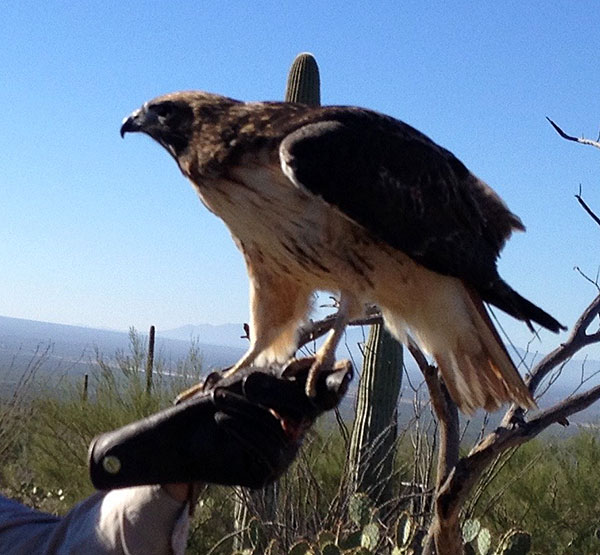 I recently learned about Sonora’s story via this blog post by Leslie Boyer, MD. Dr. Boyer is a board-certified pediatrician and a medical toxinologist…a research doctor. Most of us are probably more familiar with the term toxicology, which is defined as the study of the effects of toxins, poisons, and venoms on living creatures. Toxinology, on the other hand, is the study of the toxins themselves, in order to develop a better understanding of their biochemical composition, which in turn helps to know how to counteract their effects via antidotes and treatment protocols.

Dr. Boyer was a founding director of the VIPER Institute, which not only has one of the most descriptive acronyms ever (Venom Immunochemistry, Pharmacology and Emergency Response), but also did groundbreaking, internationally-recognized research and collaborative work to develop antivenom products. (Unfortunately, according to its website, VIPER is being disbanded later this year for undisclosed reasons.)

So, Dr. Boyer develops treatments for victims of venomous creatures. Those victims tend to be of the human persuasion, but sometimes they might be, you know, birds.

I’m not going to try to recap Sonora’s fascinating story — you really do need to read the whole thing for yourself — but I will tell you that it started when she tangled with a western diamondback rattlesnake. I found the account of how an international team of physicians and veterinarians were mobilized in a frantic attempt to save Sonora’s life through the use of techniques that were mostly untested on her species.

The story is a testament to the caring ingenuity of our species toward another, and the lessons learned might someday move our ability to heal people and pets just a bit further along.