A while back, several of my fellow bloggers were participating in a meme in which they posted geeky photos of themselves as youngsters. I didn’t participate because, well, I’ve always been handsome and sophisticated and thus had no such pictures.

This was reinforced by the photo shown below, which was unearthed by my wife yesterday as she cleaned out a dresser drawer. It was taken when I was in the third grade, attending Comanche Elementary School in Fort Stockton. The motley crew in the photo comprised the school’s Safety Patrol, the name given to the group of boys who were selected to serve as crossing guards on Rio Street, which ran in front of the school. 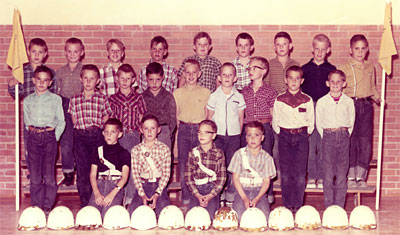 As you can tell, we were studs. We got wear those funky white helmet liners (most of which had obviously seen better days) and those awesome white Sam Browne belts (complete with Official Badges which we apparently did need), and four of each crew got to carry the Official Crossing Flags — yellow cloths affixed to white wooden poles (PVC pipe having not yet made its way to west Texas).

Rio Street had the distinction of being the only street in town that had a median, about a block long, and the school crossing went through the middle of that concrete divider. On school days, a team of five Safety Patrollers would solemnly parade out to the front of the school, four carrying the flags and one — which I recall was designated as Captain, the most coveted of all titles — carried nothing except the full weight of the authority of the Fort Stockton Independent School District. Two flag carriers would station themselves on the east side of Rio, and the other two would set up on the west side, with the captain in the middle, on the median.

Whenever civilian pedestrians would approach the crosswalk, the captain would assess oncoming vehicular traffic (most kids walked or rode their bikes to school, so there wasn’t much, ever) and determined the optimal point at which we could cause the most disruption to the drivers’ routines, and called out “Lower the Gates!” (I never understood why they were called “gates.” But, then, there were a lot of things about the third grade I didn’t understand.) Once the civilians were herded across like the helpless sheep we knew them to be, the call rang out, to, um, unlower the gates. Actually, I can’t remember that command. “Raise the gates”? “Lift the gates”?

This photo is somewhat interesting from a cultural perspective. Girls were not allowed on the Safety Patrol. Also, this is a representative sampling of the ethnic makeup of our school…but not of our town. In the year 2000, Fort Stockton’s population was almost 65% Latino. I don’t think the percentage was quite that high back in the 60s, but it was surely around the 50% mark, and yet the boys in this photo are all Anglo. That’s primarily because most Hispanics went to a different elementary school, one that was figuratively and literally “on the other side of the tracks.”

However, the photo is valuable to me because of the memories. Many of the boys in the picture were still in Fort Stockton and in my graduating class almost a decade later. I know the whereabouts of many of them today, even though I haven’t kept up with any of them.

Plus, the photo serves as a reminder of how handsome and sophisticated I’ve always been, even if it cost me a chance to participate in a blogger’s meme.