Abbye took her last breath today, bringing to an end a life that was harder than she deserved.

I wish I could say that she was the happiest dog I’ve ever known, but it’s a huge irony that she brought so many smiles to so many faces and yet I sensed that she rarely smiled herself. I suspect her early days, before we found her, were so traumatic that she never truly recovered, never really came to trust anyone. She never learned to play; she was afraid of toys (and blowing leaves, and raindrops, and so on); she remained suspicious of motives and often indifferent to human interaction. In many ways, she was more like a cat than a dog.

But she was also gentle, well-mannered, a quick learner, and occasionally as impressively stubborn as a mule. She consented to be fawned over and cared for, but she refused to let us believe that we owned her.

I mentioned the smiles she brought to others. I’ve never had nor seen a dog that elicited such joyful reactions from strangers, especially during her sighted, more active days when she’d walk at my heel through the neighborhood, and cars would slow to a crawl as they passed us, the drivers with big grins pointing her out to their kids in the back seats. I lost count of the number of times absolute strangers would stop their cars in the middle of the street, roll down their windows, and ask questions about her. After we moved to the new neighborhood, several people told me how much they missed seeing her on those morning walks, even if they’d never met her.

Abbye Fabulous (or Ab Fab, for short) was almost fourteen years old (we think), and we’re drawing comfort from the fact that she’s no longer suffering from the illnesses – physical and otherwise – that plagued her for much of her life. The little dog will be missed. 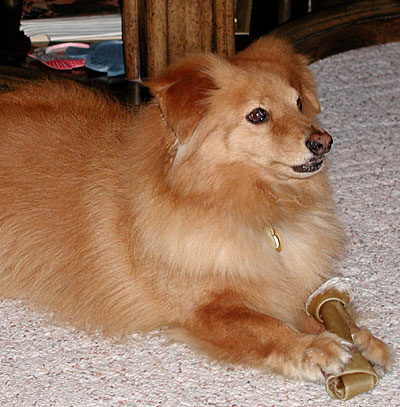