Note: What follows is an entirely accurate account. It’s not my fault if “accurate” equates to “boring.”

We went out for dinner tonight, not wanting to be the only people in Midland who didn’t do so. If there’s a restaurant in our fair city that’s not making money, it’s because the owners want a tax write-off. Anyway, we went to The King and I for [duh] Thai cuisine – and it occurs to me that there must be an ordinance that requires every city to have a Thai restaurant named “The King and I,” except for Memphis, Tennessee, which is required to have a fried chicken restaurant named “The King and Me.” But I digress. 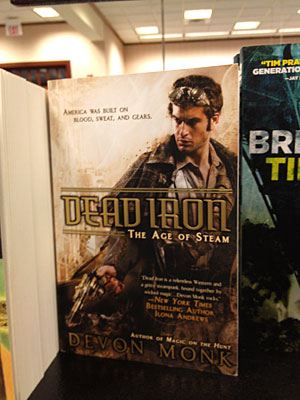 After dinner, we decided to head over to Barnes & Noble for coffee and dessert. Oh, and magazines. We split some kind of mixed berry cream cake thing, which was OK but not earth-shattering, and Debbie read some depressing articles in a Mother Jones while I learned how to supervise Millennials in a design firm.
We then spent a few minutes perusing the books…a novel concept, no pun intended. Anymore, I feel guilty buying an actual physical book, instead of downloading the digital version. Bookstore visits have become screening excursions, where we make lists of reading material we’ll later search out on the web. And, sorry Barnes, we really don’t download much from your website. I trust that our significant and regular investment in your café makes up for that slight.
That’s not to say that the shelves aren’t filled with interesting material. Take Dead Iron (OK, Barnes, at least I linked to your site), for example. This book is a genre mash-up of epic proportions: a steampunk Western werewolf novel. What’s not to like?
If you haven’t been to a Barnes & Noble recently, you might not know that there’s a whole section devoted to “Teen Paranormal Romance” novels. At least, I think they’re novels, and not how-to books. I’m pretty sure there are some werewolves in some of those books, too, but I’d be surprised if any zombies are involved. I think there’s an untapped market for teen zombie romance novels.
I did see one book that I was tempted to buy in treeware form: American Sniper: The Autobiography of the Most Lethal Sniper in U.S. Military History. It’s an account of a Navy SEAL named Chris Kyle. The book describes Kyle as a “native Texan,” I guess as opposed to a naturalized Texan. Just so happens that he was born in Odessa, which explains his proficiency with a firearm. His longest confirmed sniper kill was 2,100 yards, using a rifle firing a .338 Lapua Magnum round.
If you want to buy that particular ammo, be prepared for sticker shock. One dealer is selling a box for $111.33 – for 20 rounds. A $5/shot, it’s not a caliber for casual plinking at the range.
Uh, where was I? Oh, yeah, the bookstore. See, that’s the benefit of spending some time outside the café…it can stimulate a stream of consciousness that, if not exactly the embodiment of creativity, will be a serviceable proxy. I recommend it.