Scott Chaffin is one of my blogger heroes; The Fat Guy would be on my list of Blogs I’d Pick If Stranded On A Farm-to-Market Road Between Quitaque and Turkey (that’s in Texas, ya’ll). He writes with a deceptive country-boy self-deprecation that completely fails to obscure a wicked wit, sharp intellect, and laser-focused insight. He loves country music (the non-Nashville, Texas Outlaw kind) and is a cricket fan. I might also mention that he’s currently putting a whuppin’ on cancer.

Scott’s a besbol junkie, a mutated mix of Yogi Berra and George Will, and reading Scott’s insights on baseball is more fun than actually watching the game – there’s about the same amount of spitting going on, but a bit less scratching. And so it is that I found myself inspired by his ode to Yu Darvish after the Rangers pitcher handed the Yankees their heads a few nights ago. I was particularly inspired by his riff on the description taken from this article of the young, extremely-well-paid Japanese pitcher as a “bad-a** ninja.” 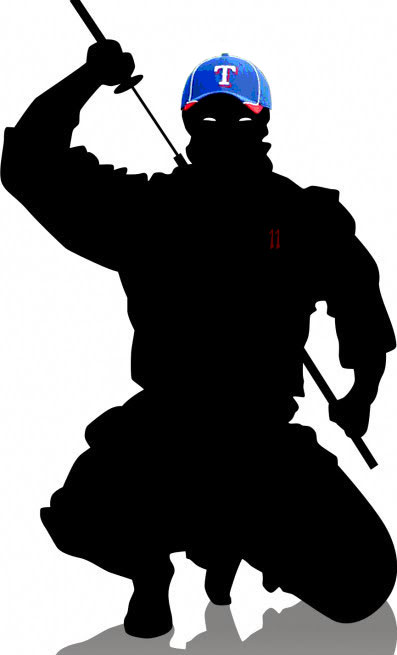 Image created via blatant ripoff and mashup of this, this, and this.
Once again, Photoshop trumps talent.