I don’t know why I waste my time reading Facebook comments (other than those left on my own posts; all of my friends are consistently intelligent and full of grace). The level of sheer stupidity and/or cluelessness is enough to make one weep for the future of our society. But, like a moth drawn to a nuclear reactor in full meltdown, I can’t seem to resist, and so I found myself scrolling through the comments on a question posed by one of our local TV stations, to wit:

The “Ride of Silence” will start at 7PM tonight, from the UTPB CEED Building at SH 191 & FM 1788. What do you think needs to be done to improve bicycle safety?

The “Ride of Silence” is a bicycle ride honoring the memory of cyclists who have been killed in Midland county. (One of those, George Hoffman, was a high school classmate in Fort Stockton.)

I hoped to see some constructive suggestions in the comments, perhaps along the lines of “motorists need to exercise more caution,” or “drivers need to stop texting while driving,” but instead I saw a string of complaints about having to share the road with those idiot bicycle riders. Meh. I’ve heard all that before, but then I saw this comment, and couldn’t help going into Mel Gibson Answering Machine mode: 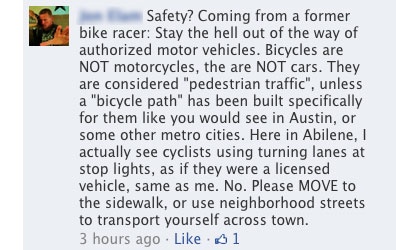 I’ve blurred the name of the, um, fellow who left this stupefyingly inaccurate comment, to spare him the embarrassment of being recognized as someone who can’t sit on a bicycle saddle because his head is in the way.

My response was simple and to the point (as well as utterly ineffective, I have no doubt): You don’t have a clue about Texas vehicle laws, do you? Misinformed people help make bicycling more dangerous than it needs to be.

I believe that. If a driver sets out with the mindset that all bicyclists who ride in the street or attempt to exercise the same rights as a motorist are lawbreakers, he or she will be angry, and that anger will affect their driving, perhaps unconsciously but still in a real and dangerous manner.

I’ve ridden more than 25,000 miles through the years on the streets and highways of Midland and Ector counties, and can count on the fingers of one hand the times I’ve felt threatened by drivers. In every case, I could sense a tangible, if inexplicable expression of anger on the part of the motorist who was intent on putting me in harm’s way, and I suspect they were driving under the same misconceptions held by the ignorant fool who posted the comment shown above.

I would have thought that by now we didn’t have to re-plow the Texas Bicycle Laws furrow, but there’s apparently a need for continuing education. For those who already know this, you can move along, but for anyone googling something like “idiot bicyclists who don’t know the laws of Texas” perhaps you’ll follow this link and learn something that will cause you to adjust your attitude. Based on what I see on Facebook, it’s a hope held in vain, but I must try.

And if you’re too lazy or disinterested to follow the link, I’ll simply sum up the relevant law: Texas bicyclists are considered vehicles (NOT pedestrians, Mr. Used To Be A Bike Racer In Abilene), and as such have the same responsibilities AND rights as motorists, unless specifically legislated otherwise.

If I seem a little exercised about this issue, please understand that for many of us, this is a matter of life and death.