MacWorld recently published 33 Expert Tips and Tricks for iOS 6, and there are a few worth passing along.

Note that even though the article’s title contains the word “expert,” if you can turn on your iPhone, you can implement each of these features. It’s not rocket surgery.

We were at a restaurant with friends last month and I was trying to take a panorama photo of the striking interior, and was having trouble because the starting point for the photo set the exposure for the whole picture. In this case, the left-to-right default for the panoramic movement had me starting at a really bright window and moving into the relatively darker interior, meaning that most of the resulting photo was too dim.

“Apple should give us some way to reverse the panorama to cope with settings like this,” I observed (although probably less eloquently than that, around a mouth full of seafood). Well, as it turns out, Apple did that and I’m just now finding out that all it takes is a tap on the panorama line, which will reverse it so that you move the phone from right to left, as the following photo illustrates. 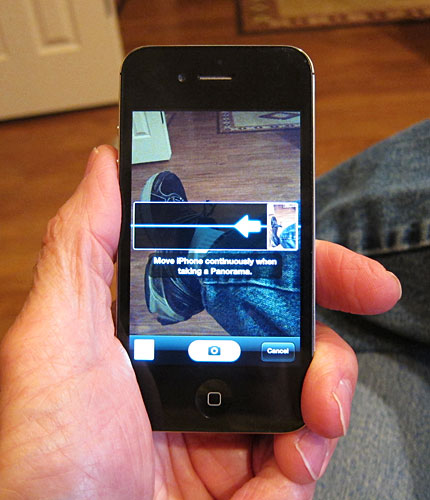 Emoji is the Japanese term for pictograph, and it refers to those tiny, brightly colored and often annoying characters that you see in many emails. They’re like emoticons on PEDs, and you, too, can fill your writing with them via your iPhone (or iPad). There’s an entire alternate keyboard dedicated to emoji built into iOS 6 and it’s activated via Settings. Select General, then International, then Keyboards, and you’ll see a screen similar to this one: 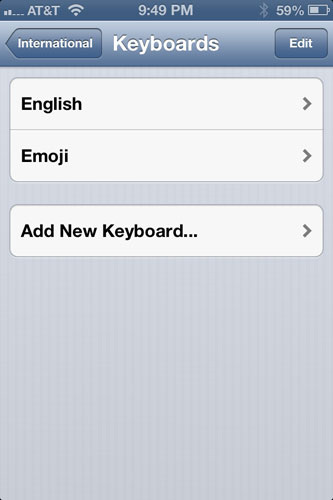 Tap “Add New Keyboard” and select Emoji from the rather extensive list (including Tibetan and Flemish). After doing so, the next time your iDevice’s keyboard appears (e.g. when you’re creating a new email), you’ll see a new “Globe” icon that, when selected, yields a plethora of overly cute emoticons to choose from. Uh, like this… 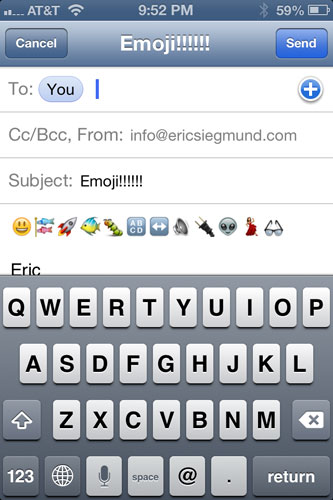 If you turn on the “Read selected text” setting, Siri will attempt to read these characters aloud. I haven’t tried it. I suspect Siri is grateful.

Note: Before you get visions of filling up your friends’ Facebook walls with icons of cute caterpillars, you should know that – as far as I can tell – Facebook doesn’t support Emoji characters. So, you’ll have to annoy them via email.

The last tip is my favorite, and it should be yours as well, if you have any respect at all for your inner drummer. You already know you can have custom ringtones that are associated with specific people so you can recognize their calls. Well, did you realize you can do the same thing with vibration alerts? And unlike ringtones which can be downloaded, you can only have custom vibrations that you create yourself, right there on your phone’s screen. Here’s how to do it.

Select a contact via the Phone or Contacts app and tap the Edit button. Scroll down the resulting screen and tap the Vibration line; this will yield the following screen: 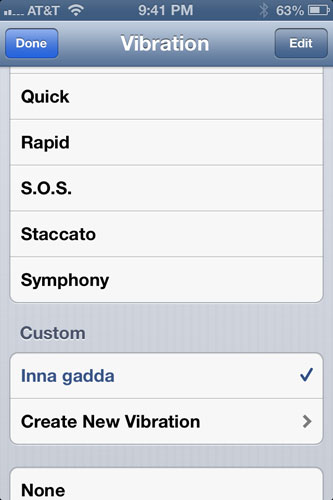 The perceptive among you will recognize that I’ve created a custom vibration alert based on the most famous drum solo in the history of drum solos.

Tap “Create New Vibration” and you’ll be presented with a drum set…OK, not really, but it’s pretty close: 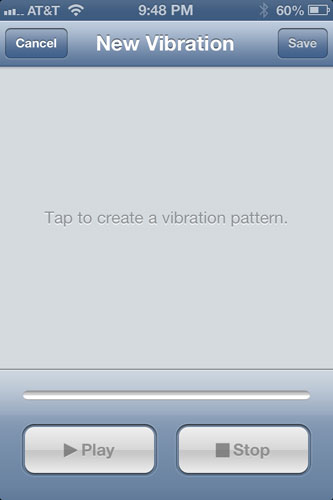 This is where it gets fun. Harken back to those great extended rock drum solos of the hazy past – Wipeout, anyone? – or re-create your favorite drumline riffs from your marching days. In other words, tap to your heart’s content, and the phone will record the result. If you don’t like the results, cancel and try again. Here’s how I did it (it helps to have fingernails, by the way; I guess you could use actual drumsticks but you didn’t hear that from me):

Once you’re satisfied with your tapping, save the new vibe and it will automatically be assigned to the person whose contact you opened at the beginning of this tip. Unfortunately, custom vibrations are nearly as interesting as custom ringtones when it comes to actually using them, but the fun is in the creation. That goes for a lot of things, though.