We’ve just returned from a long weekend in Fredericksburg, where we were able to do many of the things we like to do best, including bicycling, dancing, and eating.

We stayed at a bed and breakfast on North Cherry Street, in a quiet neighborhood close to the western edge of town. It’s one of the few B&Bs in the area that gives off a distinct Santa Fe vibe, both from an architecture and a landscape perspective. It also has the distinct advantage of being roomy enough to park a 10-foot-long bicycle inside without disrupting the flow of the space. I’d give you the name of it, but I don’t want anyone else staying there so it will always be available for us. Well, that and the fact that I can’t remember. That seems to happen a lot nowadays. What were we discussing?

Even though much of the Texas Hill Country enjoyed torrential downpours – and Fredericksburg got its share – we were still able to get in bike rides every day of our stay. I don’t believe in karma, but one might make a convincing case that this was payback for our Memorial Day trip where we hauled the bike 300 miles only to watch it sit forlornly in the steady rain that kept us off it for the entire weekend. Anyway, we rode a total of 62 miles – a metric century, if you care about such things – and nothing fell off the bike, including us. That’s always A Very Good Thing.

As an aside, we can remember when we rode that far plus a hundred miles on long weekend trips to the Hill Country. It would be nice to think that we could still do that, but as we get more miles on ourselves, getting more miles on the road no longer holds a great attraction. We just need to ride enough to justify eating well.

Following are a few photos from around the B&B. By the way, in the interest of accuracy in advertising, they should change the name of these facilities to “B&C,” where the “C” stands for “coupons.” Almost no one still offers breakfast. Instead, you get a coupon to apply towards a meal (generally breakfast or lunch) at a few choices of restaurants. Our hosts provided us with $7 coupons (per person), which we chose to use each morning at the Java Ranch Espresso Bar & Cafe where the kolaches, cinnamon rolls, and pecan coffee are highly recommended. 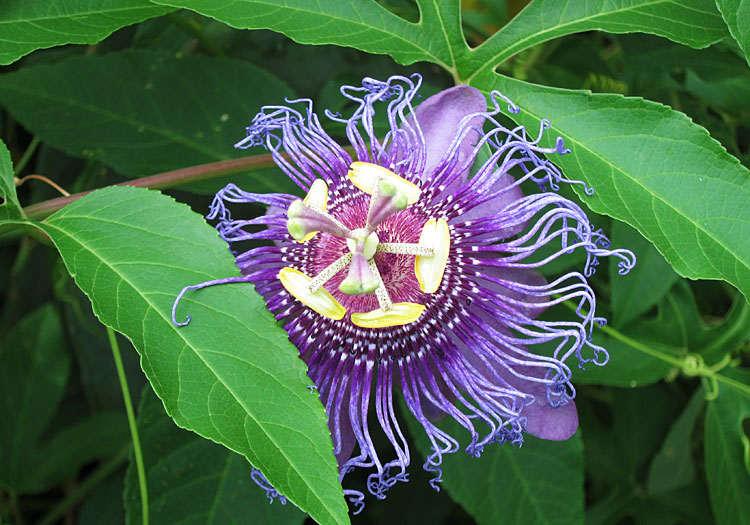 This passionflower was blooming in front of our B&B. 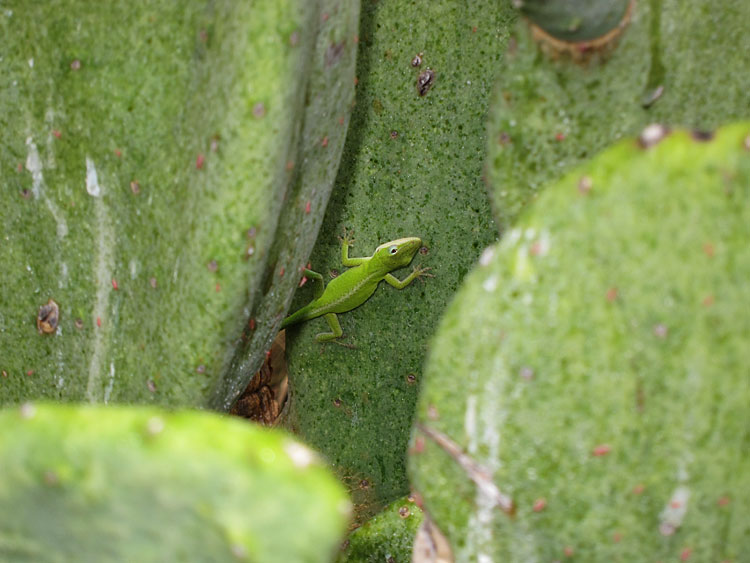 The geckos and green anoles (like this one) were busy
keeping the insect population in check. 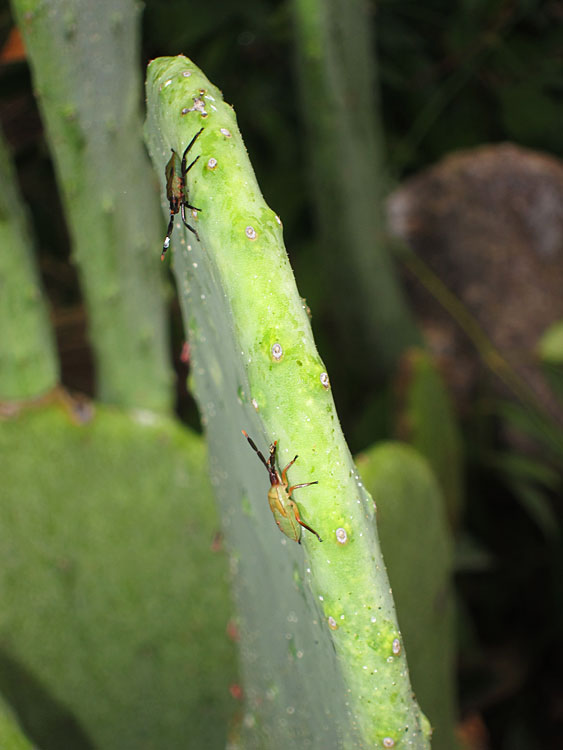 Well, some insects were spared. These were getting ready to rumble. 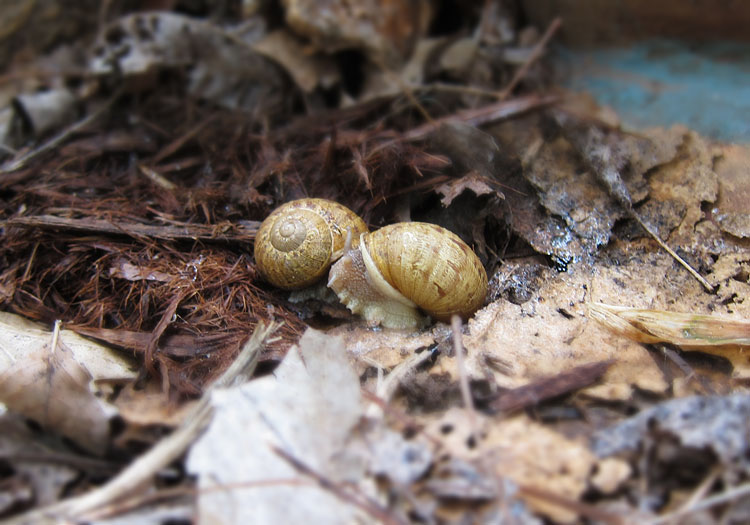 Conspiratorial gastropods creep me out. They’re talking about me, I just know it.

For those who are familiar with the Fredericksburg dining scene, we had dinner at Pasta Bella, Navajo Grill, and Crossroads Steakhouse, and lunch at the Peach Tree Tea Room, Bejas Grill, and Cranky Frank’s. Yeah, that’s right…not a German restaurant in the bunch. Oh, and we enjoyed fine al fresco dining at Luckenbach on Saturday evening; more about that later. I have to say that the lunches were uniformly superior to the dinners, although Pasta Bella never disappoints.

We made the obligatory side trip to the Wildseed Farms. It was nice to be there in double-digit temperatures. Seems like the last few times we’ve visited, it’s been 100º+. And while it’s no longer peak wildflower season, the grounds were in excellent shape, especially the butterfly garden. 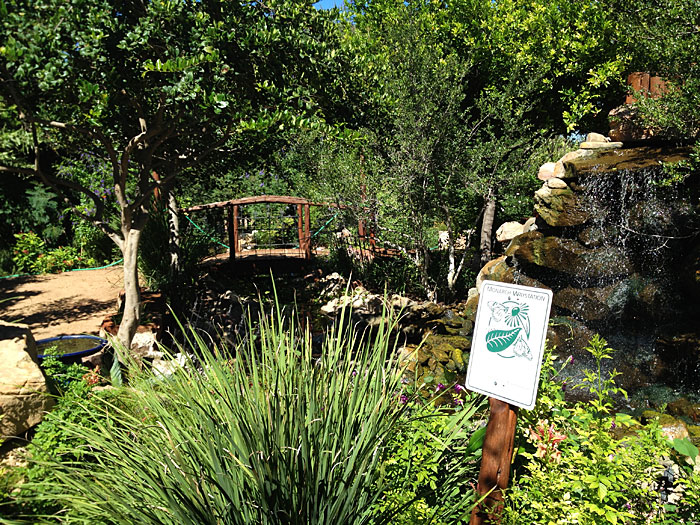 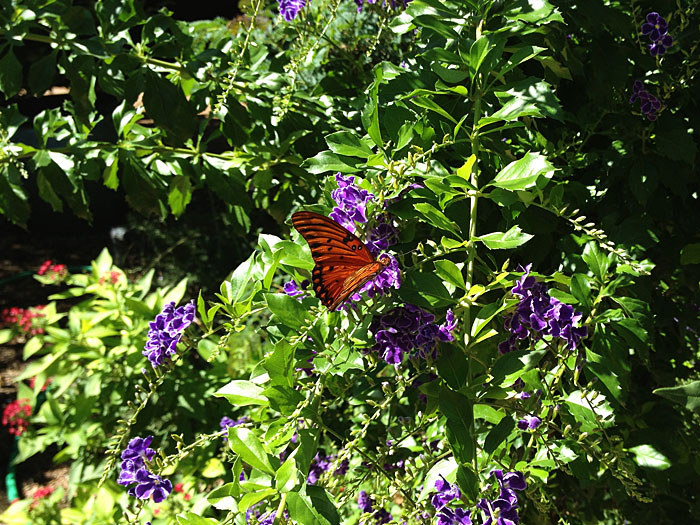 We’re getting toward the end of butterfly season in Texas,but that just makes us appreciate those that are left that much more.

As I mentioned above, we played tag with the rainshowers during the entire weekend. We got in a two hour ride Thursday morning without getting out of the city limits (we were checking out real estate), and got back to home base about an hour before the rain started.

On Friday morning – the day that the forecast called for a 100% chance of rain – we contemplated taking a rest, but then decided to try to get in a brief ride. We had a very pleasant 45 minutes on the bike, and returned just as a light sprinkle was beginning. But within 20 minutes after pulling the bike into the house, here’s what kicked in:

That’s an awfully purty sound to a Texan’s ears, especially if you’re not hearing it from the soggy seat of a bicycle ten miles from home.

Saturday was clear and cool, if a little breezy, and we did a 30-mile ride into the country, where we enjoyed a number of pleasant and/or provocative sights. 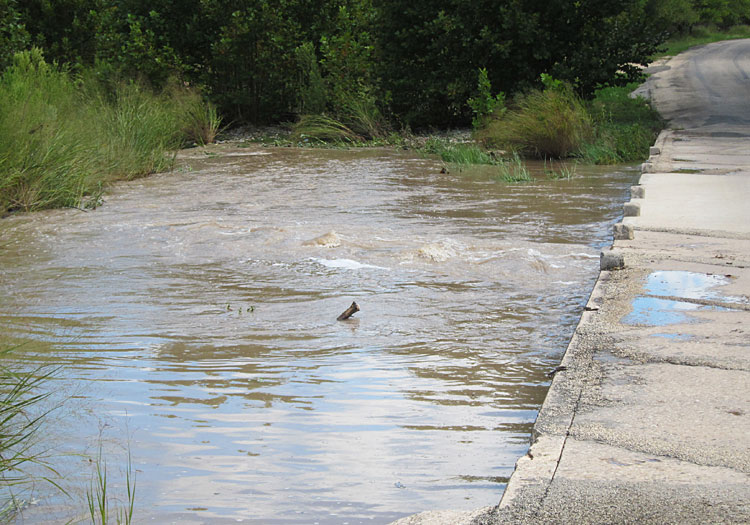 It was good to see water in the Guadalupe and Pedernales Rivers. 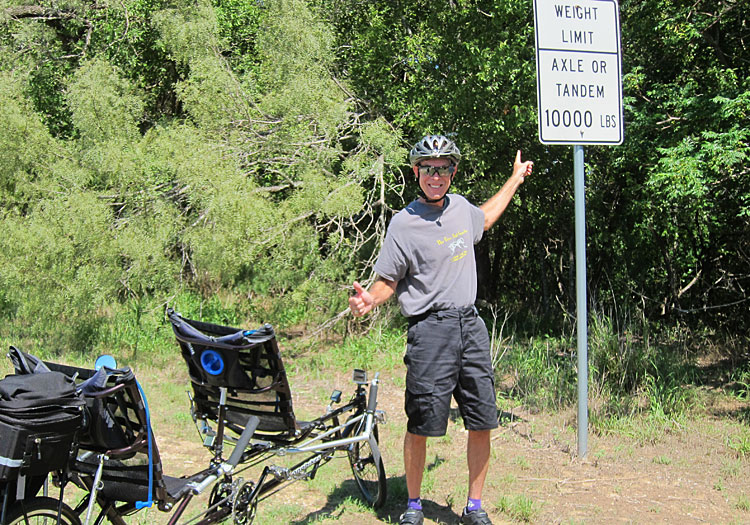 It was also good to know that we could squeak by on the weight limit. 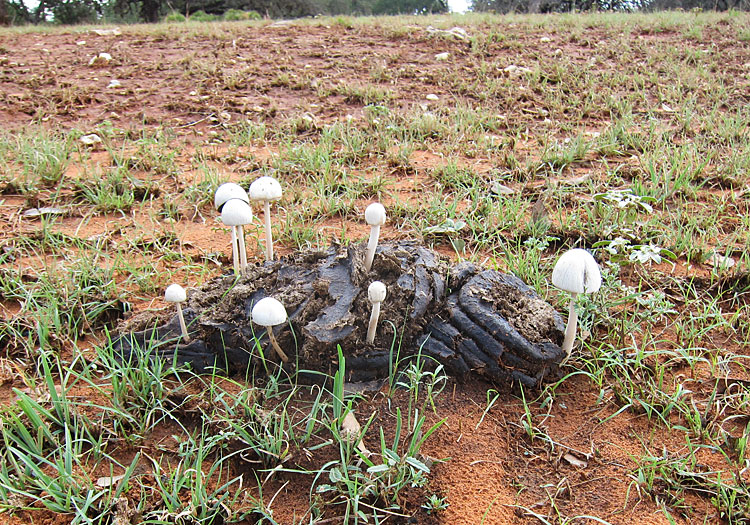 You know that saying about blooming where you’re planting? Is this what they had in mind? 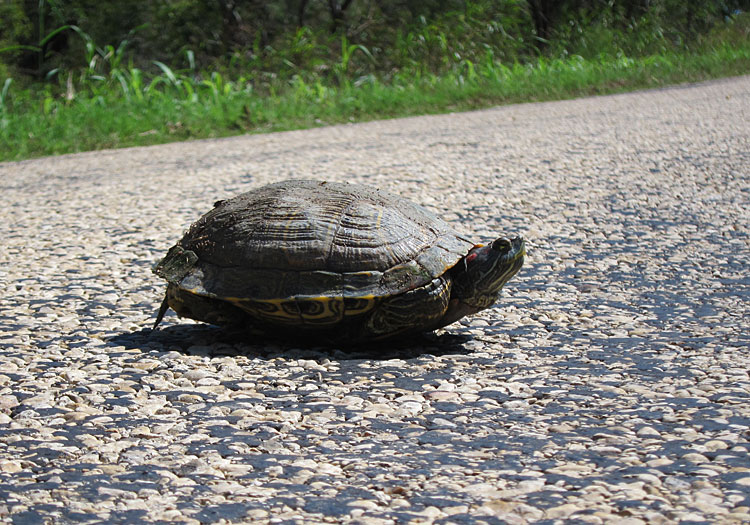 This turtle was obviously disoriented by the rain, as he left the safety of the mud for the danger of the road. (We rescued him.) 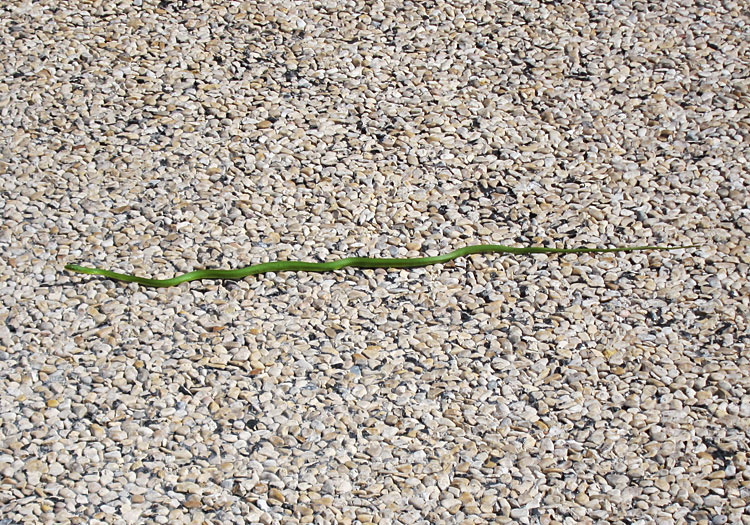 This guy (gal?) picked a dangerous spot to catch some rays.

This beautiful creature is a rough green snake (some might refer to it as a grass snake). I had to look it up, because we don’t have them in our neck of the woods, unless they’re brought in with loads of non-native trees or shrubs. It was laying motionless in the middle of a rural road, one that was fortunately not well-traveled.

He didn’t move a scale while I took a series of photos, and, in fact, I finally had to grab his tail to convince him to move off the road and into the pasture. 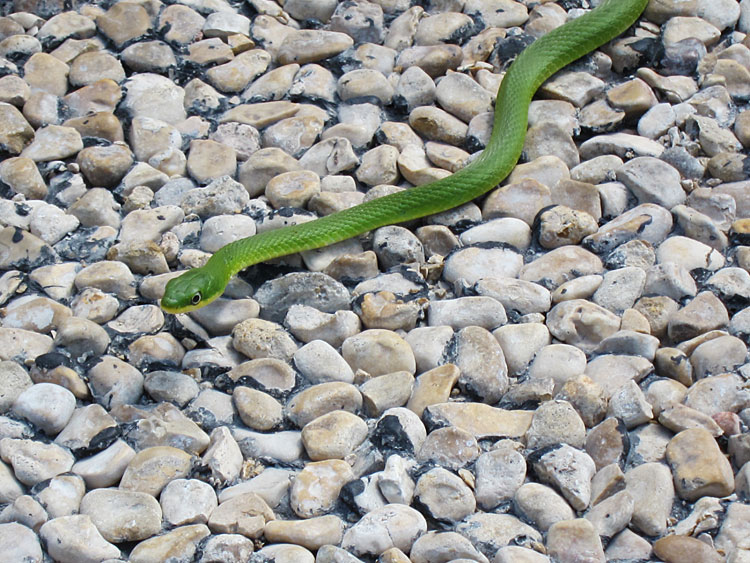 She (he?) was wary but unmoving. 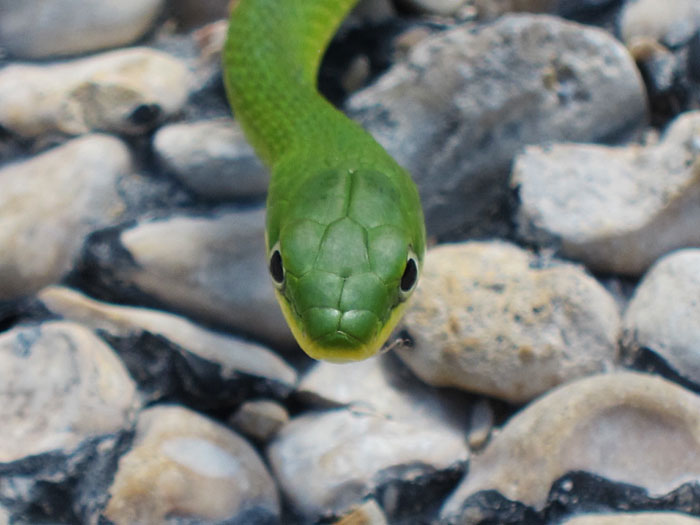 Is this a threatening countenance? I think not. (I’ve taken a lot of snake photos in my time, but this might be my favorite.)

One of the main reasons we like visiting the Hill Country are the plentiful and diverse choices of live music. There’s no lack of dancing opportunities either, although claiming a spot on the dance floor is often a contact sport. (We’re not averse to cutting the legs out from under our fellow dancers, provided they’re older and slower than us. Which, come to think of it, never happens.)

On Friday night, we moved from the restaurant to the saloon at Crossroads, where a band out of Austin called the Debonaires performed a surprising variety of modern country and classic rock. Seriously guys, the ironic name is fine for those who know you, but we almost skipped it thinking you were a Fifties do-wop group. Not that there’s anything wrong with Fifties do-wop, mind you. Crossroads has the world’s tiniest dance floor, and some of the most inebriated young-women-whose-dates-won’t-dance-with-them-so-they-“dance”-with-each-other. I’d insert air quotes around “dance” if I knew how, but I trust you know what I mean. Nevertheless, we weren’t deterred.

Saturday had more opportunities than we could handle. Almost Patsy Cline was performing in Harper at 8:00 p.m., while Chris Story‘s CD release concert and dance was scheduled at Luckenbach at 9:00. Then, back at Crossroads, Del Castillo was also set for a 9:00 show. We’ve seen, heard, and danced to all of them, and they’re each outstanding in their own way, but we decided to head out to Luckenbach.

We got to Luckenbach early enough to grab something to eat at the walk-up diner, and then got some prime seats inside the dance hall. It was eventually standing room only, and once again we had to fight for space on the dance floor. But that’s sorta part of the fun of Luckenbach…it really is a family-friendly venue, and there were kids in strollers and octogenarians, and everything in between.

The band was even more awesome than usual. Chris has brought his band to Midland several times over the past few years, so we knew what to expect. But he’s got a new guitar player (who also produced the new CD and wrote many of the songs) and he’s absolutely amazing.

If you’ve been to Luckenbach, you know that the seating is at rows of picnic tables lined up perpendicular to the stage. The bench seating and limited space means that you’ll likely be joined by strangers, and we eventually found ourselves surrounded by a group of folks who seemed to know each other, even though they were from different cities. As it turned out, one group was from Big Spring (just a few miles down the road from Midland, for you readers who aren’t from our part of the state), and they were so excited to find some other West Texans that we were apparently made honorary family members (right down to the farewell hugs at the end of the night). In addition, one of the men in the group – Bryan Maynard – wrote one of the songs on the CD, which was pretty cool. And, on top of everything else, he gave us a copy of the new CD (entitled Chapter One…you can buy it here, but it’s not available for download yet).

By the way, Chris Story and his band will be in Midland – along with Almost Patsy Cline – for the Wine and Music Festival in early October.

So, that about wraps up our trip report, and…uh…what’s that? Shopping? Well, yes, shopping did take place, and I even captured some photographic evidence. Sort of.

If you’re a regular visitor to Fredericksburg, you probably know about Madlyn’s, a women’s clothing and accessories store that’s well away for the main shopping area. It’s been there forever, and I have no idea how they stay in business – we were there for an hour on Saturday afternoon and were the only customers during that time. But they do manage to stock some good stuff; Debbie seems to always find something and this trip was no exception. But here’s what caught my attention: 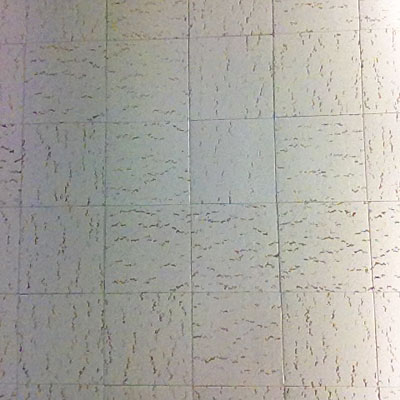 Recognize it? Well, sure, it’s a section of ceiling tiles, but it’s also apparently a part of the store’s sound system. As far as I can tell, they’ve scattered their speakers around the store behind the tiles, so as you walk around the sound sort of fades in and out without an apparent source. It’s really not a bad idea. However, it was sort of jarring to hear Texas rock from an Austin radio station coming from the ceiling of a store that caters to women who cut their musical teeth on the Lawrence Welk Show.