The weather isn’t the only thing heating up around Casa de Fire Ant. As I’ve previously documented — feel free to scroll through past entries; I’m too lazy to find the links — our newly sodded front lawn has been an irresistible siren call to armadillos and raccoons bent on destruction. The situation devolved to the point where I purchased an additional trap for each species, with mixed results. More on that later.

Education can be painful, particularly at my age, but it’s still worthwhile, and what we’ve learned lately is that the worst of the damage that I’ve attributed to armadillos is actually more likely being caused by raccoons. We’ve found several reports of newly-laid sod being rolled up like a rug, and the culprits are NOT the bulldozing armadillos that I’ve been blaming. That doesn’t absolve the armored raiders from all blame; they just tend to create shell craters instead of scorching the earth.

But not all the “education” has been effective. Desperation can lead to trying some weird-sounding tactics. For example, one of the anti-critter tips that MLB ran across was that raccoons and armadillos disliked the smell/taste of (1) cayenne powder and (b) garlic powder. She followed that advice and for several days our front yard smelled like an Italian restaurant. Seriously…you could detect the aroma from a block away.

This tactic actually seemed to work for a while, although I worried about the effects on the lawn of the spice dumping. And, of course, we had to start over after every rainfall or bi-weekly watering. And, eventually, it seemed that the garlic just made the turf more like a tasty salad for the varmints.

So, we moved onto the next tip, which alleged that raccoons don’t like to walk on weird surfaces (my interpretation). There was a recommendation for putting down bird netting in the areas frequented by the animals. I was skeptical, but we were desperate, so off to Home Depot went MLB and she returned with a hundred dollars worth of netting and garden staples. We spent a few hours yesterday putting down almost 2,000 square feet of netting around the perimeter of our front lawn (which has four sections subdivided by sidewalks and driveways, so the perimeter of the grass is larger than you might think).

I had visions of waking up this morning to find animals hopelessly entangled, like dolphins in ghost nets, and actually lost some sleep wondering how I would go about freeing an angry raccoon from such a snare. I thought about searching Amazon for “suit of armor.” (Of course they have one.)

The good news is that I didn’t have to unwrap a mammal. The bad news is that armadillos don’t give a whit about bird netting. They managed to cross no-man’s land, as it were, and continue to divotize the lawn. 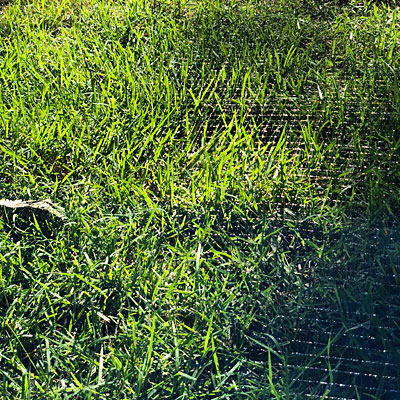 Bird netting is apparently not the threat nor hindrance we were led to believe.

There was a silver lining. As I mentioned above, I now have two raccoon traps, and both of them were filled with raccoons this morning. This represents significant and heartening progress in our quest for a lawn that doesn’t resemble a battleground. And, interestingly, the double trapping occurred by yet another tip that actually worked.

I had always known that raccoons had a fondness for cat and dog food, but since I had had good success with the sardines, I continued with the smelly, messy baiting. But it had been more than a few nights since I’d trapped a raccoon, and I had game cam footage showing them ignoring a baited trap. I have no idea why they’d apparently lost interest in sardines, but I decided to buy a small cheap bag of cat food at the store on Monday, and that’s what I used as bait in both traps last night (I used my last can of sardines — again, in vain — on Monday night).

My hope is that getting rid of this pair of raccoons will at least give our lawn some time to recover, and allow me to concentrate on the wily armadillos. I’m not naive enough to believe I’ve solved our problems, but as you can see by the following tallies, the past month hasn’t been unproductive. So, unless I’m trapping animals that someone else has trapped elsewhere and dumped into our neighborhood (sadly, not an impossible situation), I have to think I’m making a dent in the natural population of varmints.

I’ll save you some math: in just over a month, that’s 7 raccoons, 5 armadillos, 2 possums, and 1 slow-learning feral cat which I caught multiple times but counted only once. Actually, I may have caught the same possum twice, but they all look the same to me. I hope that doesn’t sound speciest.